The Vice-President of Apex Igbo Socio-cultural Organisation, Ohanaeze Ndigbo, Worldwide, Ichie Damian Okeke-Ogene, has blamed the individualistic approach of some Igbo politicians and leaders in the zone as responsible for setbacks in the region’s quest to produce the president of the country in 2023.

The former President of Ohaneze Ndigbo, Anambra State Chapter, who spoke on the country’s emerging issues ahead of the 2023 General Elections, explained that the actions and divisive attitude of some Igbo leaders had not helped the Igbo agenda so far in the presidential race.

According to him, ‘There are issues affecting Ndigbo with regard to the coming general elections next year. It is about ten months before the elections; I won’t say things have worked out the way Ohaneze Ndigbo had expected.

‘In spite of sustained efforts and advocacy to ensure that most political parties, especially the major political parties, fielded candidates of Igbo extraction as their presidential candidates, things eventually did not work out that way, which, I must say, is very unfortunate for the country.

The Ohaneze chieftain said the political class in Southeast frustrated the efforts of Ohaneze Ndigbo in championing the cause for a presidency of Igbo extraction and maintained that even the performance of the region’s delegates to the conventions with the exception to Ebonyi was a slap on the expectations of the Southeast Geopolitical Zone. 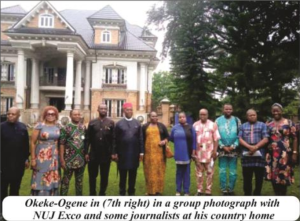 He accused the delegates to the last conventions of being controlled by the leadership of their various political parties which was reflected in their voting pattern, even as he blamed the Southeast Governors Forum and Ohaneze Ndigbo for the outcome of those conventions. ‘Their actions made it clear that there is leadership vacuum in the Southeast Region because the failure of the Southeast governors to have a united front at this critical time is quite regrettable.

‘As far as I know, not for one day did I hear of their meeting to take a stand and position on the 2023 General Elections. They were so individualistic in their approach towards this fundamental and decisive issue to the extent that information we received alleged that some Southeast governors coordinated delegates for candidates from other geopolitical zones.

‘Similarly, the Ohaneze Ndigbo leadership equally has some part of the blame because when it was obvious that the governors were failing, Ohaneze Ndigbo never met to discuss and invite the aspirants as we used to do before, to address them on the need to prune down the number of aspirants.

Chief Okeke-Ogene however assured that efforts were in top gear with high profile Igbo elders to bounce back on track for the Igbo race to achieve her agenda in the 2023 Elections.

Commending Obi’s joining of Labour Party, Chief Ogene, who is a former National President of Anambra State Association of Town Unions (ASATU), said Obi’s emergence as the presidential candidate of the Labour Party had brought a new dimension in Nigerian politics.

‘Obi is a candidate that gained immediate national and to some extent international acceptance. This is not because of presidency of Igbo extraction or rotational presidency. Neither is it because of ethnic or religious reasons. Rather, it is because Peter Obi stands for those who want to enthrone a new political and social order that will end recycling of leadership that has become a burden to Nigerians.

‘His emergence has engendered a mass movement that will have a similar, if not stronger impact like the EndSARS Protests because people see in him a candidate that will evolve a new Nigeria with ability and capacity to change the way things are being done by upholding a progressive ideology that is not based on tribe, religion or political leaning,’ he said.

Earlier, the NUJ delegation said their visit was part of the union’s efforts to create fruitful partnerships with stakeholders and institutions in the state.