Of Yahoo Boys and Endless Killings of Young Girls

There’s a new craze in town and if care is not taken, the future of our youths will never be assured. Every time on social media, I see a lot of horrific videos of young girls either being killed in the most gruesome manner or of young girls suddenly acting like mad people after being dropped off buy these so called Yahoo boys with flashy cars, after having sexual encounters with them.

In the past when you hear ‘Yahoo boys’, what comes to mind is usually young boys involved in internet scams or cybercrimes.

These are the smart ones who use their intelligence and extreme knowledge of the use of the internet to scam innocent people of their millions of Naira, Dollars, Pounds or Euro, as the case may be. When you talk of Yahoo boys, It is basically like stealing money from people like Hushpuppi did.

Most victims are people that believe in get rich quick schemes on the internet while some others are just unlucky people who they have access to their account details through stolen ATM cards. Most times the victims are spread across all continents and the crazy thing is, when they dupe their victims out of their millions, they don’t stop. They keep going on, looking for more millions until they’re caught.

These days however what you will hear about is the Yahoo Plus. They are obviously more advanced than the Yahoo boys we are used to hearing about. The Yahoo Plus involves being fetish, shedding blood and even sacrificing family members for rituals before they get their so-called wealth. We get to hear about all sorts of horrific things done by these boys all in the bid to make quick money. 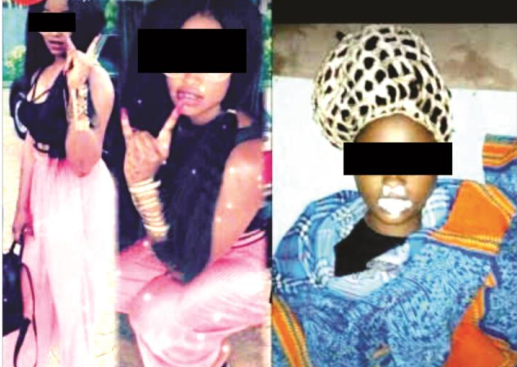 I once watched a video on YouTube when I was curious about their activities and to my utmost shock, I watched a scene were these boys were eating live entrails of a cock as part of the initiation process to become real Yahoo boys that will make millions of money. After I watched that video, I began to understand the strange cases of young men suddenly driving along the streets and parking their car jumping down from the car and begin to act like they’re mad.

The story behind the madness is that one of the stages of becoming a Yahoo boy involved going through what they call a One Day madness. It has to be in public, right there on the streets and sadly, the Yahoo boy will not know when the madness will start.

It could be on the streets, in the church, at work, the marketplace, anywhere!! Once it is time to go mad, the person will begin immediately to behave like a lunatic and it will last the whole day or even a day after. Then, he is qualified to move on to the next stage. Some of them do not survive it while some others are chained and taken away to mental institutions during this stage.

I really wonder what happens if the person suddenly regains their sanity when inside the mental home. One of the stages of being a Yahoo Plus boy is that at some point somebody close to them has to be used for human sacrifices. It could be their mother or sibling or girlfriend or father. I believe that the reason why most cases that have been brought to the open have involved these boys using their mothers for sacrifice is because children are closer to their mothers than their fathers.

I remember reading about the case of this woman who the son wanted to kill as he was instructed to. Somehow, she overpowered him and raised the alarm that made neighbours come to her rescue. They beat him up so badly that he was forced to openly confess that his mother did nothing wrong to him, but that he was asked to kill her with his bare hands so that her blood will be used for sacrifice that will make him a millionaire overnight.

Some of them are asked to have sexual relations with their siblings. So they plan to drug them and then rape them. One of the one of the Yahoo boys in Cross River State met his Waterloo when he put sleeping pills in his elder sister’s glass of wine. He offered her wine and then when he she slept off he raped her.

The herbalist who directed him to do this rejected his sacrifice because he was supposed to sleep with her without drugging her as a condition. This made him lose it and eventually he created a scene with the native doctor and they were both arrested after their confessions.

From any angle you look at it, there’s nothing good about Yahoo Plus. Yahoo Plus is evil and involves everything that is evil. The wealth that comes with it is even more evil. This is why I am very concerned because, most of these boys look like the ordinary guy next door. Yahoo is not written on their faces. Most of them

look innocent and actually come from good homes. The only problem is they want to get rich really quick and are ready to pay any sacrifice to achieve their aim.

This is why I’m appealing to our young girls out there. Please stay away from these boys and their mouth-watering offers to give you the world on a platter. There’s nothing good about their gifts. Their money is evil, as well as their so-called benzes. The benz they drive was not bought with their hard-earned money. It was bought with money gotten from the blood of an Innocent person.

So you could be the next victim, to see that the money they flaunt before you continues to get bigger in the banks. Just recently, the news of a young girl who was murdered by her boy friend, simply named Osas in Benin hit the cyberspace. I took a good look at the young boy when I saw the news on the internet, he didn’t look like a killer. He looked like a good boy from a good home, with nothing to show that he was a Yahoo boy.

I’m sure that if anyone told that young girl that he would take her life, she will vouch for his innocence and so called ‘love’ for her. But he killed her and took flight after committing the atrocity. Sadly even if he’s caught and jailed eventually, the fact is that the girl is already dead and nothing can bring her back to life. So she’s the loser here.

I will end this with the recent death of a young girl whose boyfriend also killed for ritual purposes. In this case he actually plucked out her two eyes to be used for their sacrifice. The police have been on the lookout for the boy. Funny enough, he was found at a mental institution where indications are that his family put him there to hiding from the police.

He was actually seen acting like a mad person. Public opinion out there however, is that he was pretending by feigning insanity so as to be left alone in the psychiatric home instead of facing prosecution for murder. Again whether he is eventually prosecuted or not, the young girl is already dead and nothing can bring her back.

Young girls, can you listen to me? Please stay away from these boys. They have nothing to offer you but early horrific deaths. Be content with the little your parents provide you with. Life is truly not a bed of roses. Avoid bad girls that always talk about money and expensive hair and expensive jewelry and big cars and rich boyfriends.

Face your studies. At the end of the day, you’ll end up better than they ever will. Did you watch the recent video online where a party was held by a Yahoo boy in his apartment? The party was going on in his apartment in the living room, but unknown to all the people there, in the very next room there were people performing rituals there and killing girls one after the other.

They had the temerity to record it and release it into the cyberspace. They lured this particular girl into the room and stripped her off her clothes, dragged her by the legs and stabbed her severally on her back while the other one held her head and sliced her throat with a sharp knife. All I kept thinking was that if she had been in school where had parents actually think she is, she will probably still be alive today.

Please stay away from these gets rich quick boys who want your body parts for sacrifices and nothing more. Understand that you’re a child of God and a gift to your parents. Your parents want the best for you which is why they put you in school in spite of the crazy economic crunch in the country.

Please be focused about your studies, get a good job and leave your life happily ever after. A good man will find you and keep you in his home as a wife and companion. There’s so much to live for. No material things for money are worth making you lose their opportunity to make an impact in your world. Think about it!!!