Of Private Schools and Modern Parenting

First it was Bowen College and now it is Chrisland College, Lagos, which is now in the eye of the storm over the misdemeanor of some of its students. In the first school, a student was given mortal injuries by his fellow students, a development that called to question, the kind of checks carried out in private schools, especially high profile ones.

Now, even as the dust raised by the first one is yet to fully settle, we are being treated to a whole new dimension of the moral decadence prevalent in these so-called ”big man” schools. A girl said to be only ten years old (which I doubt) was filmed making love to a student barely older than she is. Worse still, it was in the presence of other students. They were supposed to be on a life impacting programme in Dubai, United Arab Emirate, which however turned out to be a life destroying programme. 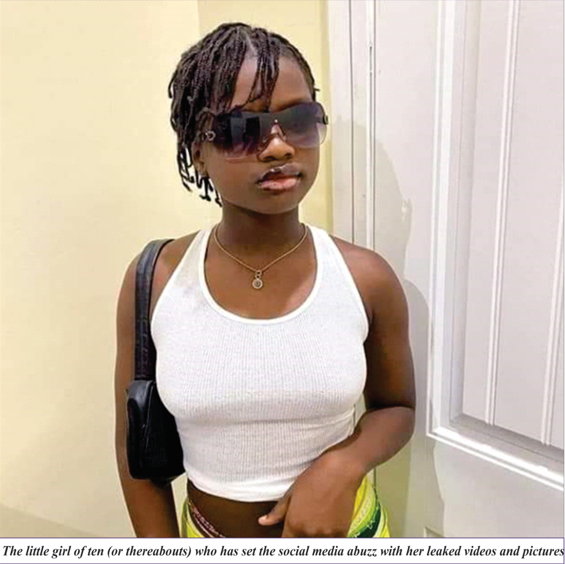 Furthermore, her handle called, ”bhadgurl4k” (bad girl fuck, apologies to the language), enjoys a large following of 24, 000 likes. She was said to have posted over 526 videos with 4, 134 followers as at Easter Monday. More damning still, is the discovery that those videos were recorded in her home.

All the above point to the fact that the girl in question either became what she is right from the home and only got further spoilt on hooking up with her ilk at school, or vice versa. But the bottom line is that the parents, especially the mother, who allowed her to be dressing the way she is in the picture above, should not blame the school or anyone for what the girl has turned out to be, but herself. The mother bears the chunk of the blame because women are supposed to be closer to each other and there are many things a girl can talk with her mum that she will not talk with anyone else, except her close friends.

And this brings me to the issue of how modern parenting is negatively impacting on today’s children, as well as how the so-called ”big man” schools are not helping matters.

You see, our people are mostly vain. They like to be identified with things that are ”not cheap”. Thus, be it the clothes they wear, the cars they drive or the schools their children attend, they will ensue that others see such as class symbols. It does not matter whether such clothes fit them or whether such cars are necessary or whether the schools their wards attend are good enough to shape their children in the right manner.

Sometimes when I go to work, I run into heavy traffic in front of private schools occasioned by parents coming to drop off their kids and wards in such schools and I wonder if they must take their kids to such schools. I also wonder what makes such schools superior to or different from public schools. And this is even when the cost of having their children in such schools surpasses even what one spends in training a child in the university. My conclusion is that it all has to do with ”maintaining class”.

But recent happenings have shown that most of these private schools care more about their bank accounts than about the real well-being of those left in their care. I may not be entirely right but I’ve got this feeling that it is mostly the case. For such private schools, more time is devoted to packaging than the actual job of caring for their charges and that is why many strange things are happening in such schools. This is not the case with public schools where certain privileges are not condoned. For instance, because the majority of the private schools focus their attention on making money, they allow the children of rich parents to escape with many things for fear of losing the patronage of their parents and that is where the problem starts. But that’s for the schools. How about the home front?

It will not be out of place to say that the so-called poor parents train their children better. Children from such homes learn how to cook well from early years. They go to farm and can even hawk food items to keep the family going. Girls from such homes make better wife materials.

They are down to earth, responsible, obedient and respectful. But if you take a look at girls of some rich parents, you see them wearing talons as finger nails. They don’t know how to do house chores. They are proud, disrespectful and often irresponsible. This is because they have always got what they wanted from their parents from childhood. They use big phones in school and often treat their teachers with disdain. Scold them in class as a teacher and the next morning you will have to contend with an angry parent.

The girl making news all over the country now is no child of anyhow parents. To be in such a school means the parents are rich. And because they are rich, they can afford to spoil her with expensive phones that have all the state-of-the-art applications. That was why the girl in question was able to access many sites and learn all the bad things she shouldn’t be learning at such an age. Could she have been allowed to have such luxuries in a public school? Most likely not.

The public school teacher will feel bolder to talk to parents of their students because their salary is paid by the government, no matter how angry a parent of their student may be. Activities and programmes in public schools are also streamlined and monitored by the government as against a situation where the proprietor of a private school wakes up one day and decides to toe a particular line of action. Besides, government has a way of ensuring that its schools do not derail from its plans and there is a mechanism for also ensuring that defaulting schools are sanctioned.

Maybe with what we have started seeing these days, government would do well to start focusing more on these private schools too. It has to ensure that best practices are followed and that means taking more direct interest in what goes on in such schools. It should scrutinize applications for ownership of private schools thoroughly to ensure that only the best will be good enough.

Then, another point to consider. Was the Lagos State Government right to have shut down Chrisland School in the wake of what happened? I don’t think the government took the right decision. Shutting down the school will affect all the other good and well behaved students who had nothing to do with the things we saw in those video clips. What the Lagos State Government should have done was to constitute a panel to investigate what happened and mete out appropriate sanctions on those found culpable while the school’s academic activities continued.

I have seen that it has become the norm for government to shut down schools where certain things happen. As long as what happens in a school is not what will directly endanger the lives of other students, academic activities in such schools should go on. You don’t take action that will negatively affect good students because of the actions of a few bad ones. Let those found guilty carry their can.

There are delinquents in every school – whether public or private, and their actions should not be made to affect others negatively. Therefore, let the Lagos State Government reopen the school in the interest of the other innocent students.

Lastly, government should look into the kind of fees paid in these private schools to determine whether they correspond with the quality of teaching. It is important since the students in those schools will eventually be part of our society on graduation and we don’t want a situation where they come out half-baked and add to the problems already suffocating our nation.