The Managing Director, Operation Clean And Healthy Anambra (OCHA Brigade), Sir Celestine Anere, 3rd January 2023, during the morning parade of the outfit, reeled out plans for 2023, speaking on office reformation, work ethics, as well as recruitment.

Addressing officers and men of OCHA Brigade, Sir Celestine Anere dwelt on pre and pro disciplinary functions of the outfit, saying that all the loopholes negatively affecting the office would be blocked.

His words, ‘We have been given lots of responsibilities to catch up with and Mr Governor, Prof Chukwuma Soludo, expected us to meet with those targets before the year runs out. We have observed that some of you will go out for work and spend the whole day in the vehicle eating okpa and drinking, while others will be working. 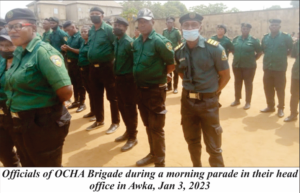 ‘I want this unprofessional conduct to stop forthwith. There are chains of command here you must adhere strictly to. Anyone found wanting will be dealt with severely.

‘We have a new working structure and mandate. If you are not ready to work with us, resign. The total work force, both Awka and other zones, are about 300 in number, but active workers are not up to 200. Those getting paid without working will be fished out. That era has gone.

‘We are going to recruit a new enforcement team, able men and women who are going to work with us. Be steadfast. Be committed. Shun laxity, pretence. Issues of transfer and swapping of work will be addressed,’ he concluded.

‘Henceforth, any Ocha Brigade officer that reports to work without his or her identification card is a fake officer and must be treated as an impersonator,’ he warned.

In a vote of thanks, the Zonal Commander, Anambra South, Mr Emmanuel Obi, thanked Sir Anere for his time with the officers and enjoined all to imbibe all that had been said.