The greatest phenomenon in Nigeria today is Peter Obi. His name is in the mouths of his friends and foes alike. Yet, he is neither the president nor a governor. He is not even holding any other political office in a country where holding such makes one relevant. But still, Obi is very much in the national conversation and more so, much more than anyone.

The reason is that Obi has started a vehicle that has seen him thrown into the back seat, with other forces taking over the vehicle. He can neither accelerate nor slow down the movement of the vehicle, least of all stopping it. To do so will be suicidal, being that he is nowhere near the wheels. The picture I just painted is the reality of Obi’s predicament today in Nigeria as the country moves nearer and nearer to the all-important 2023 general elections.

The hopeless situation of things in Nigeria is what placed Obi where he has found himself today. It happened that the rudderless leadership of the country’s elected representatives has brought the country to its knees, even while it was struggling to walk since it was mid-wifed in 1960. Since the civil war, the Nigerian vehicle has not applied the forward gear.

It has been long years of rolling back and back until it has found itself on the precipice and staring into the deep, dark void. And now, the occupants of the vehicle called Nigeria have become alarmed at the looming danger. They seem to have realized that those behind the wheels have no idea of what to do to prevent the vehicle from plunging headlong into the deep end. 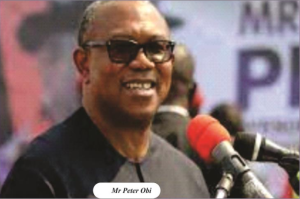 As they pondered what to do, a brand new vehicle drove up and it happened to be driven by a man made of different stock, a driver who knows his onions. That driver is Peter Obi. But being that the people in the doomed vehicle are going crazy with fear and anxiety, they have rushed into the new vehicle and seized the wheels in case the driver turns out different from what they thought him to be.

They have taken his vehicle and are struggling frantically to escape the impending slide to doom and the new driver is powerless to stop them; even though his good intentions of helping them are clear. His vehicle has been seen as the only hope of cheating death.

The above is the Obi situation in the country today. He may not be the holiest Nigerian or whatever, but Nigerians see him as holding out the last hope of pulling themselves out of the abyss. They see him as the only presidential aspirant that understands their precarious situation and also knows how to deal with it.

That was why even before he declared to run for presidency many Nigerians were telling him that he must run, whether he liked it or not. And when he agreed to run on the platform of the People’s Democratic Party, PDP, the same Nigerians chorused to PDP that they must give their ticket to Obi. But that did not happen and the song changed.

They began to urge Obi to join another party; just any party, and that they would support him. Some even said they would follow him to the CMO if it was where he decided to pitch his tents in. Such stupendous support has never been seen in this country since the days of Zikism.

When he eventually joined the Labour Party, the masses made good their promise and continued to follow him, making him the Nigerian with the largest followership at the moment and this is even when he is not spending shishi (money) like his counterparts.

Whatever anyone has seen about Obi’s support base or structure today is what has come about without inducement. People who follow him have been spending their resources to keep the dream alive. Today, for those still seeing Obi’s aspiration as an individual thing, it is no more the case.

The masses have taken over. They have kidnapped Obi and are forcing him to do their bidding and that bidding is that he should go all the way, regardless of any obstacle before him. He represents their last hope and they are not willing to let go.

Besides, Obi is not just any man. He has the capacity to go all the way, Just as he went all the way when he took the politics of Anambra State by storm in 2003. He beat his opponents hands down but they stole his mandate in a brazen daylight robbery. He fought them with all that he had and retrieved it. Before then he was given no chance but today we can all see what happened.

The masses have seen in Obi, one that can go all the way and one with more than a decent chance of challenging the corrupt system and winning. Above all, they see him as a breath of fresh air. It could easily have been any other man of such characteristics if Obi wasn’t there. So it is not just about Obi per se, but yet it’s all about him. Paradoxical, you say?

I’ll share this post I stumbled upon on the social media that says it all about why the Obi phenomenon is on and why the Obi vehicle is now running on auto pilot.

WE ARE NOT FOR PETER OBI

When people say stuffs like ‘Peter Obi’s Mob’ when referring to us, the angry young people of 55 years and below, with our above 55 elders who speak the Truth and who are fed up of with the political establishment, they make one fundamental, obvious and maybe deliberate error – They assume that Peter Obi owns this mob. (I am using my data bought with my money to promote this Obi’s candidature).

Nothing could be farther from the truth. This mob owns themselves and reports to no one.

The same unruly mob takes Peter Obi to the cleaners when he missteps, as was obvious when he made an ambiguous post about Ike Ekweremadu’s travails with the law in the UK. It is this same unruly mob that went into Oseloka Obaze when he acknowledged an individual whose influence they felt was detrimental to the campaign.

When Peter Obi did not declare for the Presidency, the same set of supporters called him a ‘mumu man’, threatened to sue him if he didn’t declare for the presidency (lighthearted of course) and they let their disappointment show when Peter Obi chose the politically underwhelming Doyin Okupe as Running Mate, forcing Doyin to declare that he was a placeholder, a technicality exploited to meet INEC’s deadline.

This mob is not waiting for Peter Obi. They are mobilising, as evidenced by the 1 Million Man March for Obi that was aimed at arm-twisting the PDP into presenting Peter Obi as their Presidential Candidate. They are everywhere, as submitted by Godwin Obaseki, the Governor of Edo state. They are in your houses, in your rooms, in your estates, in your schools, in your churches and mosques. They are in the North, South, East and West.

They are raising funds, printing branded materials and campaign collaterals. They are driving the recent upsurge in demand for PVC, using very innovative digital campaign that exploited all available media and consequently; yet inevitably, spilled into the streets, straining INEC’s resources and forcing them to postpone the deadline for PVC registration by two months, and also have subsequently extended same.

Campaign and Support Groups are springing up without Peter Obi’s consent and even beyond his sphere of control. A typical example is the wealthy northerner who made thousands of Muslim prayer mats and distributed same to mosques (Obi has been trying to exonerate himself that he didn’t order that.

There are about 100 support groups, engaging in different levels of activities and in different places and recently had set up an Obidient TV to serve the purpose of streamlining media activities of a mob that doesn’t want to be told what to do. Peter Obi is struggling to keep up and he cannot.

This mob is both intelligent and stupid, resourceful and unimaginative, in control and unruly, peaceful and belligerent, strategic and random as characteristic of every mob. What we can all agree is that they know the endgame and they are unrelenting.

Armed with a long memory of the betrayal of the people by the political class, worsening standards of living amidst rising cost of living, and a Nigerian society tethering on the precipice of abysmal collapse, leading to an unprecedented exodus of productive youths from Nigeria, this youth-driven mob is taking a last political stand around a candidate that espouses their ideals, at least in rhetoric, and evidenced by his last outing as a Governor 8 years ago, catapulting Labour Party from oblivion to obviousity.

Peter Obi will be making a huge mistake if he thinks that this mob is standing for him; this mob has become organic, somehow taking a life of its own. It is standing for itself. The Obi-dients are mostly dis-obidients. They feel that Obidience to their elders has messed their country up.

As they embark on what they consider to be the onerous job of saving their country, they have only one task, move or you will be moved!..