The Commissioner for Women’s and Social Welfare, Hon Mrs Ify Obinabo, has again given succour to indigent members of the community by settling the medical bills of Baby Destiny Nwanna.

Destiny is a five week-old baby who had a major health issue that resulted in the peeling of some parts of his body. 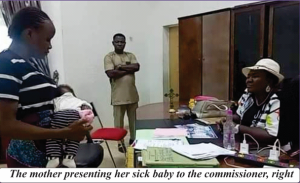 Speaking immediately after seeing the little baby who was brought in by her young mother, Chinonso, the Commissioner said the best thing to do was to save the life of the innocent child and pay the medical bills.

Narrating how the illness began, the mother of the child, Miss Chinonso, who was from Izzi in Ebonyi State, said that her baby was doing well initially but after three weeks, she noticed that one part of Destiny’s neck had started swelling.

She said that she took Destiny to Regina Caeli Hospital, Awka, but after treatment, the doctor directed her to another place where her son would be given the right treatment and she discovered that she could not afford the bill, hence her decision to come to the ministry and see the Commissioner.

Miss Chinonso, after receiving the payment deposit for her son, appreciated the Women’s and Social Welfare boss and prayed God to continue to protect the Commissioner and Anambra State Government.