Bar. Obikwelu made the call during the official handover ceremony from the former board to the present one led by Chikelue Iloenyosi at the FA Office in Awka.

He stated that apart from the handing over ceremony, they were also at the FA Secretariat to congratulate him following his confirmation as the Chairman of Anambra FA by the Nigeria Football Federation Board.

Obikwelu pledged the loyalty and support of the out gone board to the new board and maintained that they were willing to assist anytime they were called upon to do so.

He disclosed that the hand over was not deliberately delayed but that they had to wait until there was a substantive chairman. 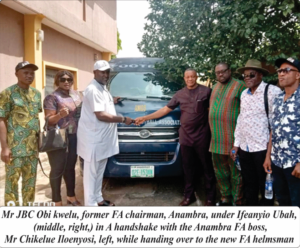 Bar. Obikwelu who was accompanied by four others, including Bar. Joe Amene; Chief Kingsley Udu; Ada Edwards and Emeka Raphael, disclosed that they lost two of their members, Dr. C.C. Amuzie and Albert Chinwe.

He later handed over the 18-seater Joylong bus and cheque books of the FA account with Zenith and UBA Banks and wished Iloenyosi luck in all his future endeavours.

He promised to work with them to take the Anambra FA to the next level.
In his remarks, the Acting Secretary, Mr. Ralph Nweke, thanked the former Board members for the ceremony.

Highpoint of the ceremony was the presentation of the hand over note by Bar. Obikwelu to Iloenyosi.