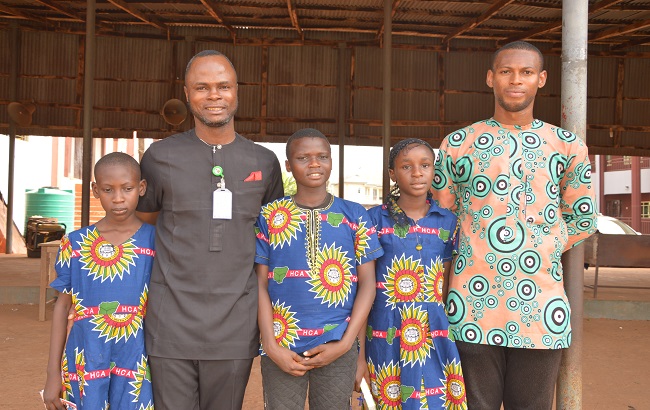 The Executive Assistant to Governor Obiano of Anambra State on Economic Planning, Budget and Development Partners, Hon Comr. Tochukwu Obiadi (2nd from left), with the beneficiary of his scholarship, Master Simon Onyebuchi (3rd from left) with two other HCA members of St Joseph’s Parish, Awka, that participated in the debate with her. 1st from left is an animator of the Holy Childhood Association of the parish, Mr Paschal Okeke, St Patrick’s Cathedral Podium, Awka, Dec 17, 2020.

On what inspired him to offer the scholarship, Hon Obiadi said it was his love for education which he described as his greatest asset.

Obiadi said he got inspired by the intelligence which the boy displayed in the quiz competition by the members of Holy Childhood Association of Awka Diocese, at the celebration.

He added that the Master Onyebuchi, was the only boy out of the six persons that participated in the quiz competition, justifying the reason while he gave him the scholarship, so as to, according to him, encourage the boy to excel in his academic work. He also encouraged other boys to learn to be participating in such academic exercise so as to develop and improve themselves.

According to Hon Obiadi, the scholarship which covered basically the student’s tuition fees, would run from his JSS 3 class to the completion of his secondary school education, including his Senior School Certificate Examination (SSCE).

In an interview with Fides, the beneficiary of the scholarship, Master Samuel Onyebuchi, said he felt elated and motivated. He thanked God for the gift of life; Holy Mother Mary, for her intercession which made the scholarship that was given to him possible.

On what the scholarship would do for him, Master Onyebuchi said it would inspire and motivate him to do more. The 13-year old boy, who, he said, had prayed to God to assist him in his education to enable him to go far, expressed his conviction that the scholarship, which was the first for him, would help him in building a strong future for himself.

Onyebuchi, who said he was the fourth child in a family of seven, where the father was a machine parts seller based in Benue State, and the mother, an eatery worker in Awka, described the scholarship as a prayer answered. He promised to utilize the opportunity of the scholarship, as well as make his parents and Hon Obiadi proud.