Obiano Urges Corps Members to Align With His Administration’s Vision

His Excellency, the Executive Governor of Anambra State, Chief (Dr) Willie Obiano has charged members of 2020 Batch ‘B’ service year in Anambra to align themselves to his administration’s vision and developmental drive in communities of the State. 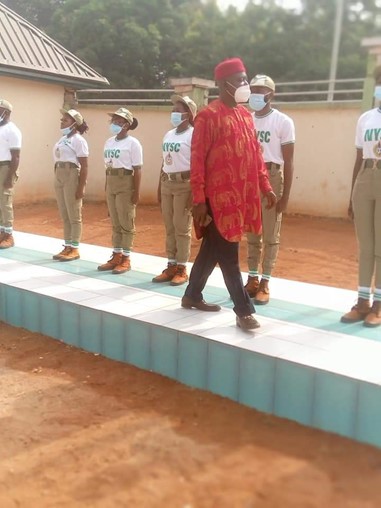 He recently gave the charge during their formal inauguration and opening of orientation course, at the NYSC Permanent Orientation Camp, Umuawulu/Mbaukwu.

Gov. Obiano who was represented by Mr Kehinde Aremu, the Coordinator of NYSC Anambra State, said that the achievement of this could be made easier if they integrated harmoniously with the people and keyed into the vision of his administration. He thereby encouraged them to work hard towards complimenting government efforts geared towards uplifting the local communities.

He applauded the contributions of corps members past and present which he says dots the landscape of the State, while urging them to surpass these achievements.

He further challenged them to offer unrelenting and selfless service to the fatherland. He also said that he was confident that their natural abilities combined with their intellect would be harnessed towards nation building.

The Governor pledged that the safety and wellbeing of corps members would continue to be of top priority to him.

High points of the event was the administration of the Oath of Allegiance on the prospective corps members by the Honourable Chief Judge of Anambra State,Hon. Justice Onochie Anyachebelu  and the formal declaration of the 2020 Batch’ B’ orientation course open by the Governor.