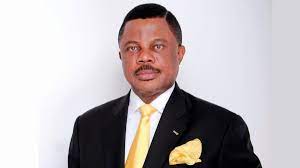 Emeka who spoke while receiving the Anambra State executive of the Nigeria Union of Journalists (NUJ) on a courtesy call in his palace, urged the commission to quickly free him.

The monarch wondered why a former governor would be arrested without a formal invitation, noting that it amounted to humiliation and victimization.

He enjoined other leaders from the South East Region to join hands in demanding for Obiano’s immediate release.

‘Journalism is a very good profession and a tool with which people get to know what is happening in the world. We want people to support in calling on EFCC to free Obiano. It is a humiliation and victimisation on someone who worked in Anambra. We know all the good things he did for Anambra. We are not complaining.

‘Besides, they did not invite him. So, why are they humiliating him? Why should they also go after the governor’s wife. Is she a civil servant? Aside the international airport he built, he paid civil servants very promptly until he left office. But we have other governors all over the country who don’t pay workers. So many former governors and corrupt leaders are walking freely on the streets.

‘But they go after a good man. Obiano knows the conditions of workers and the fact that they buy from the same markets where prices of commodities have risen, and he did well to support them through prompt payment and all he gets is humiliation,’ the monarch said.

Earlier, the Chairman, NUJ, Anambra State Council, Dr Odogwu Emeka Odogwu, condemned the arrest and continuous detention of the former governor, Obiano, and urged the EFCC to release him and follow due process in trying him, instead of what he described as media trial.

Fides recalls that Obiano was picked at Nnamdi Azikiwe International Airport, Lagos, only a few hours after handing over to his successor, Prof Chukwuma Soludo.