The Anambra State Governor, Chief Willie Obiano, has disclosed that his target is to industrialize the state by getting indigenes of the state in the diaspora to bring back at least 10 percent of their investment to the state.

Obiano spoke on Wednesday during the unveiling of the Anambra International Ultramodern Market in Ishiagu, Awka South Local Government Area. 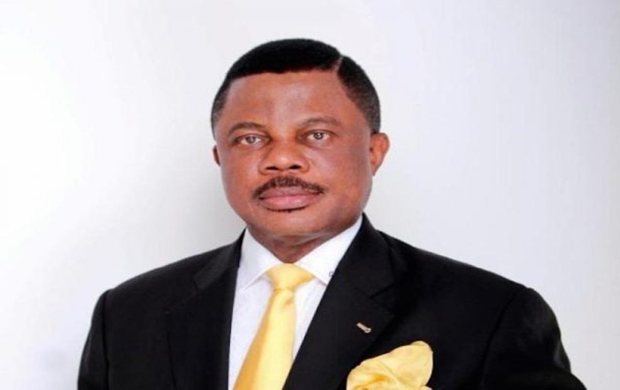 The governor who was represented by the Secretary to the State Government, SSG, Prof Solo Chukwulobelu, said the governor’s target was to industrialize the state, and that this was stated early in his administration where he said his mission was to make Anambra the first choice investment destination in the country.

‘When the governor came aboard seven years ago, he had a clear vision of making Anambra socially stable and the hub of industrial development.

‘We are happy that JC Michaels Limited, the financiers of the market project, are here to invest. We are working to ensure that our people with huge investments in other parts of the country will accept to relocate just 10 percent of their investment home, so we can industrialize our state,’ Obiano said.

Also speaking, the Commissioner for Trade and Commerce, Mr Uchenna Okafor, said the establishment of the Anambra International Ultramodern Market, Ishiagu, would give businessmen from Anambra State who did business in other states the opportunity to relocate part of their investments.

‘When I was appointed Commissioner for Trade and Commerce, I went round to know what we needed to do to make trade and commerce work in the state.

‘I went to markets in Lagos, Kano, China, Dubai and several other places to know what we can adopt and found out our strength lies outside. Most of the businesses in the places I mentioned are owned by our people. What we are targeting is that if we can speak to every well-meaning Anambra son to bring back 10 percent of their investment home, we can industrialize the state.

‘In China I noticed we had great potential across the globe. Even the Chinese people are surprised about our potentials. That is why even today, you see a school in China teaching students Igbo Language, just so they will be able to connect with us, because they want to understudy who the Igbos are because of their strength in business. The Chinese didn’t believe the Igbo are from Nigeria but spread across everywhere in the world.

‘We’re working to get our people in diaspora to bring back their investment, but the challenge, as they told me, is that they are not sure of power. Our governor, Obiano, has moved to solve that problem. He has two partnerships on IPP (Independent Power Project), and six sub-stations in the state today now.

‘Once we have power, it will bring about industrialisation, which also brings about employment, which will in turn also reduce crime,’ Okafor said.