…I Pray for Soludo, Obi Replies

Anambra State Governor, Prof. Chukwuma Soludo, has insisted that the candidate of the Labour Party, LP, Mr Peter Obi, will lose the 2023 presidential election, with Obi saying he will rather be praying for Soludo to succeed, reports Ikeugonna Eleke.

Soludo, in a lengthy write-up last Monday, which he personally authored with the title: ”History Beckons and I will not be Silent (Part 1)”, said he would not succumb to bullies.

The former CBN governor had been under intense attack by supporters of Peter Obi, for close to a week following what was seen as negative comments against the Labour Party’s presidential candidate and former governor of Anambra State.

Soludo in a television show had derided Obi, by describing his investment in the state as ‘worth next to nothing’, a comment that many perceived as an attempt to lower Obi’s towering popularity.

Soludo in the write up said, ‘My attention has been drawn to some of the tirades on social media following my frank response during an interview on Channels TV regarding the investments Mr. Peter Obi claimed to have made with Anambra State revenues.

‘Sadly, several of the comments left the issue of the interview to probe or suggest motives, inferred from my response on investment that I am opposed to Peter Obi’s ambition and therefore committed a crime for which the punishment is internecine abuse and harassment, even to my family.

‘Everyone knows that I don’t follow the winds or one to succumb to bullies, or shy away from a good fight, especially when weighty matters of principles and future of the people are involved.’ 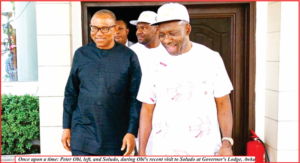 Soludo stated that many times, he had urged Obi to return to his former party, the All Progressives Grand Alliance, APGA, to actualise his presidential bid.

He added that he had always told him that he was not capable of winning the 2023 presidential election, especially under Labour Party, which, Soludo said, had neither a councillor nor a local government chairman.

According to Soludo, Obi was not just his friend, but also his brother, but despite that, they had their political differences.

‘For full disclosure, let me state that Peter Obi and I are not just friends, we call ourselves brothers. But we have political differences: he left APGA for PDP after his tenure as governor, while I have remained in APGA since 2013.

‘During the last two governorship elections in Anambra in 2017 and 2021, he led the PDP campaigns but APGA won landslide in both elections. By the way, in 2016, he visited and proposed that I defect to PDP and contest the 2017 election against the incumbent, Willie Obiano, but I declined.

‘After my victory in November 2021, he called to congratulate me as I did to him in 2010. That is the Anambra way: we fight fiercely during campaigns but share drinks at the next social events. After all, it was the great Zik of Africa who taught us that in politics, there are no permanent friends or permanent enemies but only permanent interests,’ Soludo said.

Many commentators who have written against Soludo over his attack on Obi have alleged that Soludo was fighting Obi because he has ambition of becoming president after working for the candidate of the Peoples Democratic Party, PDP, Alhaji Atiku Abubakar, and is bent of scuttling Obi’s chances to brighten his.

But, Obi has replied to Soludo’s attacks, saying that he preferred to pray for Soludo to succeed as governor, while also describing him as his elder brother.

Obi in his reply last Tuesday at a function in Abuja, had said: ‘He (Soludo) remains my brother, we are very close. I remain prayerful for him. For other things in which I didn’t succeed, God has given him the opportunity to do them and succeed. So, if there is anything pending, governance doesn’t finish, people are still in government in America, so you stop where you will stop, other people will continue from there.

‘He is the governor of the state; he is my senior brother, he is even more intelligent than I am because he is a professor, I am a trader, so he knows more and will be able to do things better than I am doing it. I have done my little bit as a trader, now the professor is there, he will do his own as a professor. The schools I didn’t roof he will roof them; that’s how government goes.

‘The one they said is worthless, we invested 3.5 billion Naira in International Breweries…that facility is there employing directly and indirectly over 10,000 Anambarians. The shares were at a time being sold at N50. Today the shares are about N5 or so. When you spread your investment, some will go up, some will come down, but overall, the company is still there, the company is still doing well, it is still part of the global chain and everything. I needed to explain it not because I am defending comments by my brother.’