It has been a week of controversy as the campaigns for the 2023 general elections officially kicked off on September 28. In the eye of the early storm are the embattled Catholic priest, Rev. Fr. Ejike Mbaka, and the governor of Anambra State, Prof Chukwuma Soludo.

While Mbaka was accused of prophesying against Obi winning the presidential election, Soludo was alleged to have instructed his party members of the All Progressives Grand Alliance, APGA, to work against the emergence of Obi as the next president of Nigeria, reports Jude Atupulazi.

Fr Mbaka who was returning from a suspension by the Catholic Diocese of Enugu following his earlier anti-Obi statements that riled many Nigerians and reportedly embarrassed the Catholic Church, was said to have been directed to proceed to a monastery where he would embark on spiritual reflections till January 2023. 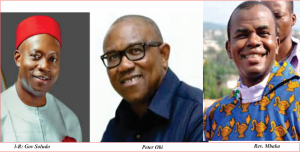 He was directed further to hand over to Rev Fr. Anthony Amadi before proceeding to the monastery. But when he came with Fr Amadi to his Adoration Ministry, Emene, Enugu (AMEN) to formally introduce the new priest to the congregation, the new priest was instead greeted with loud boos by hordes of Mbaka’s followers who rejected Fr Amadi and insisted that they wanted no other priest than Mbaka.

This was before Mbaka was reported to have announced that he received a revelation from God about the 2023 presidential election and said that while he would not make it public, he was certain that a certain Peter Obi of the Labour Congress, (LP), would not ‘smell the seat’.

This immediately triggered a meltdown on the social media, with many condemning Mbaka for ‘attacking’ Obi. Some even called for his transfer from the Adoration Ministry.

But a day later, Mbaka, in a video he shared on Facebook in which he denied that he prophesied against Mr Peter Obi, clarified that he neither mentioned Obi nor talked about him during the said Mass, and accused those he called detractors of peddling the story. Saying that he had forgiven them, he however advised them to apologize.

He said: ‘After handing over to Fr. Anthony Amadi on Sunday, I started hearing that Fr. Mbaka spoke against Peter Obi. ‘I, Rev. Fr. Mbaka, on that Sunday never mentioned Peter, not to talk of Obi.

‘Please, whoever is being used by the devil to blackmail me in the name of doing any job for anybody is satanic and should apologise, withdraw such nefarious and satanic utterance and be careful when you want to harm the image of a man of God.

‘Whoever did that, I have forgiven you, but I want to hear that you have apologised and withdrawn what you said against me on that day just to put the Adoration Ministry in trouble.’

His words, ‘Rather than help me, the protest may jeopardize my priestly call.  Therefore encourage peace, encourage love, within this time and do more prayers and God of heaven will do the rest for us in Jesus name.’

In a related development, the Anambra State Governor, Professor Chukwuma Soludo, has also denied allegations that he is trying to thwart the ambition of Peter Obi to become president.

Soludo was said to have instructed members of his party, the All Progressives Grand Alliance, in Anambra to work against Obi at the polls.

Several reports claimed that Soludo charged the Anambra APGA faithful to work against Obi because he, Soludo, planned to succeed Alhaji Atiku Abubakar of the Peoples Democratic Party, PDP, after four years.

But in a statement made available to journalists in Awka last Wednesday, the Chief Press Secretary to Gov Soludo, Mr Christian Aburime, denied the allegations, saying that at no time during the meeting was Obi a point of discourse.

The statement came with the caption, ”Re: Soludo charges Anambra APGA to work against Peter Obi, dreams of Presidency after Atiku”.

The rebuttal read in part, ‘We note with disdain the fallacious and distasteful publication of a write-up with the above heading by faceless individual(s).

‘We would have chosen to ignore this mischievous and utterly despicable report, but for the benefit of a few innocent Ndi Anambra who could be mis-informed by the write-up.

‘The following should, however, be noted: that Governor Chukwuma Soludo, CFR, only held a private meeting with his party members of the APGA. This meeting is a routine gathering where issues concerning APGA are discussed.

‘At no time during the meeting was Mr Peter Obi a point of discourse. It is pertinent to note that issues discussed at the meeting were purely issues relating to APGA affairs.’

Obi and Soludo are known to be long time friends predating their foray into politics.