Sylvanus Okpala MON, OON, was the first captain of the national U-20 team, the Flying Eagles. He was also captain of the senior national team, the Green Eagles and winner of the 1980 Africa Cup of Nations as a player. He also won the Nation Cup in 2013 as an assistant Coach to Stephen Keshi.

Okpala played in two Olympic Games for Nigeria 1980 and 1988. He was the player who started the exodus of Nigerian players to Europe when in 1983, he moved from Rangers International Football Club of Enugu to Clube de Futrbol Uniao in Portugal.

Okpala spoke with Jacob Ajom on the agenda of the Presidential candidate of the Labour Party, Peter Obi for Nigerian sports. Excerpts 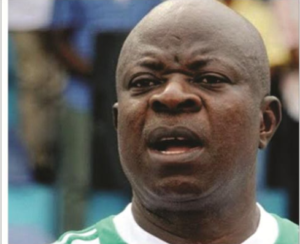 If there is one politician who has taken the Nigerian political ecosystem by storm, that person is Peter Obi. The presidential candidate of the Labour Party. Before he joined the Labour Party, not many Nigerians reckoned the party as a force that could excite any conversation regarding its electoral chances.

Obi’s charisma, direction and political philosophy have won him numerous followers, particularly the youth including, of course, sports men and women. One of the sportsmen who is close to the Labour Party presidential candidate is former Nigeria international, Sylvanus Okpala, even as he confessed that he was not a card-carrying member of the Labour Party.

During the week, Okpala spoke with journalists in his Lagos home on Obi’s plan for Nigerian sports, should he be elected president in the 2023 general elections.

“We don’t follow the rules. Is it in organization? We don’t respect contracts; train with substandard facilities, don’t care about athletes welfare, nutrition and so forth. Everything we do here is not up to international standards because we cut corners. We lag behind in everything.

“Let me take, for instance, football. Nigeria is affiliated to FIFA. There are rules and regulations called statutes on how to administer the sport. Do we follow FIFA Statutes? Check it out, those countries that are doing well in the world, they follow the FIFA Statutes. Obi said under his Presidency, Nigeria will be made to follow those rules because he believes in the rule of law and order.

Those countries that are doing well have rules for administrators, for coaches, for players and rules for even the fans. But Nigerians are not following those rules. In Nigeria, a player who has served out his contract cannot still walk away as a free agent. Clubs still insist on getting a share from his new contract, whenever he secures a new club. This is wrong. Another bad example of what I see as a breach of contract is that clubs put players on transfer even months after signing on the players. Some fail to pay salaries as and when due.”

He said that when contracts are respected, players are motivated and everything done according to the rules, Nigerian sportsmen and women will churn out good results. He believes with good results and consistency Nigerian sports can market itself and attract sponsors.

“Peter Obi’s philosophy is not to ask people for money before he starts any project. He believes in starting well with  good organization. Even his political campaign which, under six months, has grown into a movement, he never believes in asking people for money.

He said if what you start is done well, it will naturally attract people who, in their own volition, will want to contribute to the success of the project. This also relates to sports. For instance, if Nigeria had won the Africa Cup of Nations or qualified for the Qatar 2022 World Cup, would Nigerian football be looking for sponsors? The answer is no, because a good product sells itself.

“If our league was well packaged, wouldn’t sponsors be running to sponsor the league? Everybody wants to identify with a winner because in sports, the winner takes all. And that is what Peter Obi is saying. Organise with the little you have, make a headway, let your good product show and people will key in. You don’t have to go cap in hand asking people for money to start a new project. You have to start from somewhere with the little you have and manage it well.

“When your product is good, sponsors will come in and want to be part of it. Every sponsor wants to get something in return for his investment.”

Sports as tool for national cohesion:

Okpala said Obi’s romance with sports originated from when he was a young man as a Rangers fan.

As a governor of Anambra state, Obi remained very close to former internationals, especially ex-Rangers players. He recognises the fact that Rangers is not just a traditional team, but also a movement of a race. He also recognises the role Rangers played in the reintegration of the Ibos into Nigeria after the civil war.

Recalled Okpala, “Obi said, as a young man, soon after the war, Ibos were all afraid to come to Lagos for fear of being killed. Everyone was afraid to leave the South East as a whole. Then Rangers came and started going out to win matches, going to Lagos to win, to Kano in the north and win matches, and so many other places. The fans who went along with them experienced no intimidation or abuse.

That was how some of the fans started settling in those places, including Lagos. The Ibos then realized that even among the military that fought against the Ibos, a good number of them were Rangers supporters. He knows what sports can do in terms of youth empowerment and national cohesion. He knows sports offer the biggest window of opportunity to millions of youths. He has promised to pay special attention to sports when he becomes president, come 2023.”