A former Anambra State Governor, Peter Obi, has expressed belief that Nigeria, with its abundant resources, can be on the right developmental track, with strict implementation of progressive policies.

Mr Obi, while reacting last Wednesday to a recent World Bank report that 82 million Nigerians had fallen deeper into poverty, said he was currently in Morocco as part of his plans for meetings and to understudy the best performing economies in Africa.

He revealed that his meetings with top Moroccan government officials in areas of security, economy and education, had strengthened his belief that Nigeria’s economy, though seemingly bad, could be turned around with progressive policies and sacrifice from the country’s political elite. 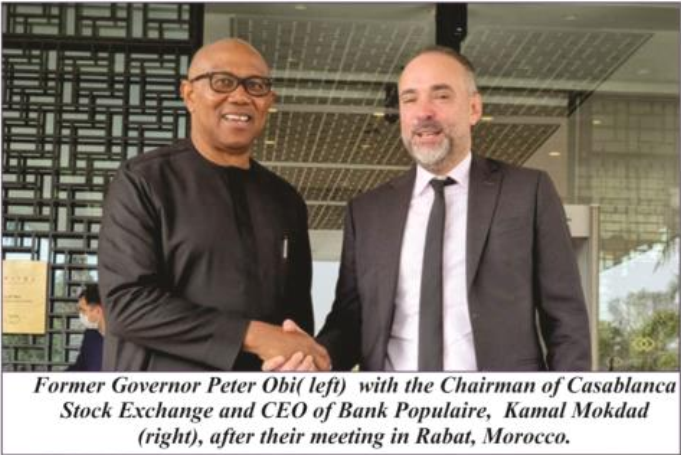 Obi said he had stopped comparing Nigeria with the developed countries but had chosen to study and compare Nigeria with better performing economies in Asia, such as China, India, Bangladesh, Indonesia, and the Philippines.

According to him, his comparison also included African countries with politically stable, rapidly-growing and large populations of over 30 million, such as Egypt, Morocco, South Africa, and Ghana.

‘Here in Morocco, I have held useful meetings with top government officials in areas of security, education and the economy. I have also had extensive meetings with captains of industry; for example, the President of Confédération Générale des Entreprises Du Maroc (CGEM), Mr Abdu Souleye Diop and the Chairman of Casablanca Stock Exchange and CEO of Bank Populaire, Kamal Mokdad.

Our discussions have deepened my belief that, although our economy appears distressed and hopeless, the situation can be turned around to kick start the growth trajectory,’ Obi said.

He concluded that the first step was to move the economy from being consumption-based to becoming production-based.