Obi, Fighting against Principalities and Powers of Nigeria’s Politics

Those who still view the presidential aspiration of Peter Obi from the prism of Peter as an individual are missing the biggest point of the moment. What Obi is aspiring for has since surpassed him. It is no longer about him but about all of us; all those at the receiving end of things in Nigeria. To this group of Nigerians, Obi simply represents a tool which they all can use to fight back against the vicious system that has been recycling garbage, impunity, hopelessness and even death.

Obi stands for that third force needed to challenge and change the status quo. He is that rallying point which we all need to support, regardless of whether we like him or not. In this Obi project, the brutalized Nigerians have a chance to use their power to change things for good. Thus, even if Obi wants to stop he will not because the masses will not allow him simply because he has set off a movement that has gone beyond him and which only the masses are capable of stopping.

For long, Nigeria has remained flattened by the weight of corruption perpetrated by the thieving political class. These thieves in various shades of agbada do not care anymore how we feel. They believe that as long as they can throw wads of the Naria notes and Dollars about, Nigerians will fall over themselves to pick them while groveling in the dust. And they are right. 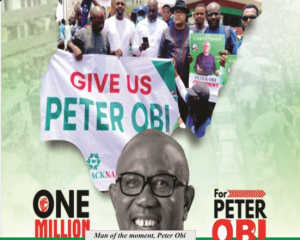 The recently concluded primary election of the People’s Democratic Party, PDP, even that of APGA here, showed just how much depraved society has become. Because of money, mostly in hard currency, many sold their consciences to the lying political class. Even though the throwers of the money never told the delegates what they would do to uplift them if elected, the delegates never cared. All they wanted was money. All they wanted was to live by the day. Any thoughts of tomorrow were not their business. To them, it is ”Give us this day, Oh Lord, our Dollars!!!”

It did not matter to them that their previous display of gluttony got them to where they are today. All they cared for was money, money and more money. That was why when the Rivers State governor, Nyesom Wike, came calling in Awka to talk to the PDP delegates from Anambra, he got an applause when he denigrated Obi, their own son and brother.

For specifics, when he asked them if they knew Obi would not win, they chorused, ”YES!” I bet that some of them might not have meant it but because they needed Wike’s money they were ready to deny their fathers and mothers. When I read it, I just wondered what would have been the scenario if Obi had gone to the core north and asked them same question. Perhaps they would accuse him of sinning against their religion. But here, it is anything goes. As people say here, our mumu dey shame me.

But on the lighter side, those who can see beyond their noses appreciate that what Obi represents is their freedom from their perennial oppressors. They realize that what is needed now, more than ever before, is for the masses to make a statement; to sow a seed that may or may not germinate today.

They know that whenever it does, they will look back to the events of today and nod their heads in satisfaction and say, ”We made it happen”. That is majorly the whole essence of today’s struggle. It is not about Peter anymore. But then, how did Peter come to be playing the role he is playing today? How come he has suddenly become the focal point of the struggle to steer the Nigerian ship out of its destructive course?

Obi has never been the usual politician; not from inception when he flooded our space with billboards and posters asking probing questions and proffering solutions. Who, indeed, can forget that eternal poser of his that asked, ”Are we cursed or are we the cause?” It came with a picture of Obi supporting his chin by one of his hands in a manner depicting one looking for answers.

It was a poser and picture that had many wondering who the man was. There were of course many other pictures used in posters and billboards, but the one I mentioned took the Oscar.

Obi, as governor, walked his talk and projected himself as an unusual governor. He did things so differently that those who benefitted from the rotten system he was trying to sanitize fought him with all they had. It led to an illegal impeachment which Obi easily overturned. It led to the members of the state assembly at the time refusing to sign his budget but which they eventually did after Obi brought in many stakeholders to make the lawmakers see reason. Recall that at the time the house of assembly was peopled by hostile members from an opposing party.

The last fight was the conduct of an election by the Independent National Electoral Commission, INEC, when there should have been no election. But they had rushed to conduct the election in order to install their paymaster as governor. But after just 17 days in office, Obi sacked the governor through the court, making another history after earlier sacking the governor who stole his mandate after a battle that spanned almost three years in court.

As governor, Obi carried his own bags while travelling. He also travelled light. It was a sharp departure from his contemporaries who travelled with hordes of aides who had no business being on the trips. Obi accounted for every Kobo of the state he spent. He also appeared on live radio programmes in the state owned radio to answer questions directly from the people he served. It was a live programme, mark you, so there was no room for doctoring of questions.

Obi drastically cut the cost of governance and practically made the office of governor unattractive. His convoy was the least in the country at the time too. He used any excess money to develop infrastructure, especially in health and education.

He partnered with donor agencies which made his government rely less on taxing and levying the populace. Obi never stayed outside the state beyond two days and all his trips outside the state were official, rather than going to have extended rest or holidays. He was the darling of the masses but the enemy of the thieving political class.

Obi might not have got it all right but everybody knew he tried his honest best. Today, when the people are looking at who becomes their next leader, is it any surprise that they are looking the way of the man called Obi? What is happening now around the country has therefore grown beyond Obi. The masses have seen in him the only man from the lot out there who can give them hope.

Indeed, to say that Obi is the best of the lot is stating the obvious. He has been the only one telling Nigerians what has gone wrong and how to fix them, while others are merely flexing their muscles and either telling us how it is their turn to rule or how much money they have.

Obi may not be the next president. He has also admitted so by saying it was not a do-or-die affair. But he has also said his only desperation is to save Nigeria. The point of it all today is that Obi is being used by the masses to express their anger and dissatisfaction with the state of affairs in the country.

Obi has simply become a metaphor for change which most Nigerians have keyed into. He has provided a vehicle which the masses have seized the key and set the vehicle in motion. Where it will take them is what they may not know for now but at the moment, many are just hoping that it can carry them as far as it possibly can.

But the bottom line is that many want to be part of this moment in history, a moment when the long suffering masses are rising above their oppressors who have sworn to keep them pinned down; oppressors who no longer hide their motive and who are daring the people to do their worse.

They represent the principalities and powers we hear about in the Bible. They are formidable. They are monstrous. But if the people can only realize the power they have, maybe, just maybe, the people’s power will overcome, and we can only begin to hope so if we all get our cards ready. We vote and leave the rest to God. Yes, Obi has started what he can no longer control, but it’s all on the positive side.