Obi, Another Date with History?

Many of the young people rooting today for the presidential candidate of the Labour Party, Mr Peter Obi, may not have actually known when the Peter Obi phenomenon came about. Right from the time he burst onto the scene in late 2002, he had come across as a different breed of politician, preaching what appeared a strange kind of gospel.

This had appealed to many people and soon Obi’s style turned into a cult followership which resulted in an unprecedented support during the election of 2003. He won with a landslide before his mandate was hijacked and later recovered. But before that recovery was a titanic fight towards that recovery. That was when Obi showed the man many would later associate him with.

That was a period of some of the greatest pressure mounted on him by individuals, groups and even a section of the Church, for him to step down for Chris Ngige, the man who hijacked his popular mandate. But Obi kept reminding anyone who cared to listen that his pursuit of the stolen mandate was not for him but for the future generation. And that happened to be the time when a certain self-styled godfather rode rough shod over the political affairs of the state and determined who got what and who did not.

And so the pressure persevered on Obi to sacrifice his popular mandate on the altar of convenience. What more depicts what happened in those days than this piece below that I stumbled upon on social media recently? Let’s go over it and return to talk more on the Obi phenomenon

Peter Obi shocked us! “It is not correct to say with God all things are possible.” 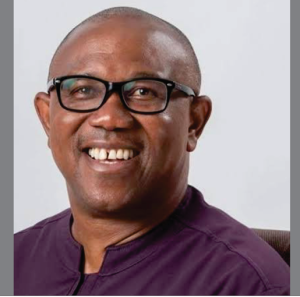 This was the first wise statement I heard from Peter Obi. It was sometime in 2004 at Blessed Iwene Tansi Major Seminary, Onitsha. At that time Peter Obi was battling in the courts to reclaim his mandate stolen by the PDP and (Chris) Ngige.

On that particular day, the seminary community organised a symposium to which, Uwazurike, the leader of MASSOB; Ngige, the then governor of Anambra State; and Peter Obi, were invited. The Archbishop of Onitsha, the lecturers, who were mostly priests and the seminarians, took turns to appeal to Peter Obi to support Ngige to rule Anambra because Ngige was doing well by constructing roads and bridges. Everyone who talked quoted the popular biblical verse: “With God all things are possible”. And that “God writes straight on crooked lines”.

When it was Obi’s turn to respond, he began by telling the Archbishop, the priests, the seminarians and the general audience that he wanted to correct a wrong assumption. He said: “The statement, ‘with God all things are possible’ is not correct”.

For him only right things were possible with God. Going further, he said with God now he could not become a Pope because it was not right. That if he had wanted to become a Pope, he would have gone to the seminary, become a priest and subsequently a bishop, before dreaming of becoming a Pope.

Pointing at his younger brother, Fabian Obi, who is also a priest and our lecturer in the seminary, and now the Rector of the seminary, he said, “My brother here can be a Pope with God, but for me, with God at this stage, I cannot be a Pope.”

He now threw a question to us: “Armed robbers steal our cars and maintain them very well, even better than ourselves. Assuming we happen to see the armed robber after 10 years with that car in top form; well maintained, would we say, ‘Oh, dear armed robber, you have been maintaining this my stolen car very well, you can keep it?’ ”.

Everyone in the auditorium was incapacitated by his wisdom. He pursued his mandate and the rest is history.

The above gives a little insight into the Obi Philosophy which shaped the man he has become today. But even before then was the matter of how he got the APGA governorship ticket in 2003 over his rival, Chief Ralphs Okey Nwosu, a perfect gentleman.

Nwosu was the man who had first declared to run on APGA platform in Anambra State. He was then virtually running the party with his own resources and I still remember how the first vehicle he donated to the party then was celebrated. I was also part of his team as his media assistant and every indication was that he would fly the party’s ticket. Then Obi showed up.

To cut a long story short, Obi’s fame quickly spread like wild fire and he was on the lips of everybody. All the parties claimed he was their man and I remember meeting the then ANPP (or was it UNPP) state secretary in his office while I was doing a story to ascertain which party Obi actually belonged to.

The secretary even pulled open his desk drawer and showed me Obi’s name as their member. Such was his popularity until he formally declared for APGA at Holy Trinity Cathedral field in Onitsha to put paid to every speculation about where he belonged to.

He clinched the APGA ticket in circumstances that some saw as controversial, chiefly because the APGA egg heads then decided to embrace reality by going for a consensus candidate. The scenario then was that Okey Nwosu would have won the primary if it had been held simply because he had been around much longer than Obi in the party then. It was also clear that the one many party members knew and were used to was Okey Nwosu.

But then the party knew that Nwosu did not have the capacity to go the whole hog. It was as if the party hierarchy foresaw what would play out in the main election and after and decided to pitch tents with Obi whom they saw as one capable of not only financing the party, but weathering any storm that might come and how right this decision proved to be!

Obi not only carried the sole responsibility of running the party, but also appealed to non-APGA members which Nwosu could not have done. Just before that election APGA had become a movement largely because of Obi who ran a kind of issue based campaign never seen at the time. His billboards asked vital questions and had messages that wowed everybody. It was very clear that APGA would sweep the poll whenever it came up and that was what happened.

On election day and as the results were being counted across the state, it was all APGA, APGA. Obi won in every town except in Uli, the home town of then incumbent governor, Dr Chinwoke Mbadinuju. But bizarrely, Obi’s mandate was overturned by the Independent National Electoral Commission, INEC, which was manipulated by the self-styled godfather earlier mentioned.

That was how Ngige came aboard. Initially he was given the cold treatment by the people of the state and I recall an incident at Choice Hotel, Awka when a colleague asked him at a press conference why he did not look happy as a governor-elect should look. I cannot remember the response given to that question but it was clear the man was not very comfortable. It was later I learnt what made him so. Those who put him in office had started making what seemed like impossible demands which would surely emasculate Ngige as governor and render him a mere puppet.

But they would soon meet their match in Ngige who began to fight back after his failed kidnap. And while he fought his godfathers he was also ”showing the people of the state that there was money in government” by building roads and paying the arrears of workers’ salaries not paid by Mbadinuju.

This caused the people of the state to begin to soften their stance towards him and soon, he became very popular. But still, Obi, who had gone to court to challenge the result of that election, refused to let off despite massive efforts by people and groups to cajole him to change his mind.

This was where the APGA hierarchy was proved right in their decision to make Obi the party’s consensus candidate. The Nwosu I knew would have caved in once any bishop pleaded with him to give up on his mandate. Not that Nwosu was weak but because he wasn’t the kind of person to be seen as refusing the pleading of the Church, especially when it was unthinkable that a sitting governor could be removed from office.

But Obi stoically refused give up and went ahead with the court matter, not even after the then national chairman of APGA, Chekwas Okorie, sold him out by going to Ngige to say the party had washed its hands off Obi’s court case. That was when Victor Umeh took over and provided a strong support base to Peter while the court case lasted until victory was achieved.

It was a monumental judgement that shocked every Nigerian. It became possible that a sitting governor could be removed from office. Obi had done the impossible! And that opened the floodgates for other governors and other candidates to reclaim their stolen mandates. It also altered the country’s electoral calendar.

Today, nearly twenty years after, Obi has set out again to attempt to do the impossible: wresting power from corrupt and powerful cabals. He has again made his aspiration a mass movement and it is again clear that in a free and fair election he will win. But yet, there is the fear that the dark forces holding the nation by the jugular will not just sit and watch someone come out of the blues to sack them. But Obi is not fazed by that.

While meeting with Anambra monarchs earlier this year in Government House, Awka, Obi had told them he was out to fight to the end. Those who don’t know him may see this as mere empty talk by politicians but students of the Obi history do not.

It is still six months to the presidential election but Obi has already changed the narrative. Only God knows what will unfold towards the end of the year. Is history about to repeat itself? We shall see.