The newest phenomenon in town, Mr. Peter Obi has just turned 61. Contrary to the customary use of the day to see him through biographical prisms, we shall view him through the mass movement that has all the attributes of a revolution in which he is a prominent figure.

As far back as one can pry into the history of Nigeria, one would see all manner of writers and commentators presenting the country in terms of the Hobbesian State of Nature. Our Nigeria of today has all the attributes of that hypothetical state.

Do you remember the musicians of “Yagayaga” fame? The truth is that Nigerians have all become exasperated about the country. The frustration is many times magnified if one travels abroad, to countries like Bahrain, Qatar and UAE. In those countries you see oil revenue at work; how their leaders, even those that are not ‘democratic’, utilized their oil wealth to develop their countries.

However, in Nigeria the opposite is the case.   We have become the classic example of a country that is sick unto death. Even less-endowed African countries are all better than Nigeria. During my last one-week trip to Rwanda, I observed that their streets are always neat and did not encounter a single security check-point. Power supply in that country did not go off for a second.

In Nigeria, there is practically no light and the cost of running power-generators is now forbidden such that banks and other large organisations have been compelled to reduce their operational hours. As a matter of fact, the energy situation in the country is getting worse. Having entrusted the governance of the country into the hands of the worst among us, the country now strangely looks like its rulers.

Today, there is a bit of freshness in the air. Nigerians, especially the youth are saying ‘enough is enough’. For those pretending not to know what is happening, let them be informed that a peaceful revolution is presently taking place in the country.

It will culminate on the elections of February 2023, when the instrument of that revolution – PVCs – will be deployed to sweep aside the crop of old, inept leaders that have held us hostage. Some of them are deluded that they are still “turnistically” very much relevant even while play-acting not to be aware of the current tide hovering over  the country.

Part of the effects of the incipient revolution as seen from the recent (July 16, 2022) Osun State governorship election is that Nigerians are moving away from parties to the merits of particular individuals. The fall of APC is enough testimony for this thesis to stand. 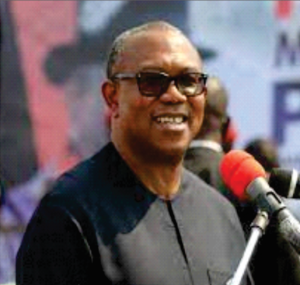 The sheer number of young people that voted in that election portends a positive future voting pattern. Ideally, young men of sixty-five and below should be much concerned about a country they, everything being equal, have over 20 years to be in than those who are in the December of their lives.

The call for a peaceful revolution, the weeding out of the old and rejected practices that has held us down is not a new development. Those that carried out the first coup were even referred to as revolutionaries, for trying to upturn a situation that Nigerians considered retrogressive at that time. Till today, many Nigerians believe that the country needs to be sanitized through a process that would involve the weeding-out of much nonsense in the realm.

On the 20th of January, 2004, 18th years ago, Thisday newspaper published an article by this writer entitled “Imperative of a Revolution.” The contents of the article are even more germane today, because then, we were in paradise without realising it.

The said piece started by defining revolution as “a complete and drastic change of the status quo to, perhaps, something better. It could be violent when the revolution has to content with resistance that needs the force of arms or other similar exactions to be broken. Genuine revolution is often aimed at cleansing a system that has fallen into stupor. Many elements constitute it.”

The article demonstrated that those elements of revolution were at work in Nigeria. For the author, except something was done about the leadership of the country, it would end up experiencing a revolution.

That timeless teacher, history, shows us that however induced, whether The French Revolution, Haitian Revolution, Chinese Revolution, American Revolution, Arab Spring or whatever, revolution is normally awakened in a people that are long subjugated by their rulers and is led by those who believe that change is a desideratum.

Most people that led revolutions in the past were in the beginning not of revolutionary cast.  It was actually by a fatal chain of circumstances that these men were driven from the limits of moderation and precipitated into excesses at the very thought of which they would have shuddered. This is where we are in Nigeria. Who is happy with the country today?

Lest we think Revolution is restricted to governance; the article referred to held that “Jesus and Mohammed were also revolutionaries, because of Jesus’ ‘pervasive influence on the society’. Single-handed, He re-defined the spiritual direction of large part of humanity.

Mohammed is likewise regarded as a revolutionary because he undertook to raise the spiritual and moral level of a people harassed, before him, by barbarism. He succeeded more completely than most revolutionaries. When he began Arabia was a desert flotsam of idolatrous tribes; when he died it was a nation”.

The likes of Dr. Nnamdi Azikiwe, Chief Obafemi Awolowo and Sir Ahmadu Bello were all revolutionaries for the independence of the country. Again, let me refer to my 2004 article: “Some of them travelled abroad for further intellectual insemination. They saw the light, came back with enough of its pollen, and pollinated the minds of most Nigerians”.

Be that as it may, have our heroes laboured in vain? This is a tough question, especially when some of their progenies do not even believe in labour as a critical factor in nation-building.

Thus, in the article of 2004, this writer observed then as now that “a sedulous analysis of the country today proves that the germinated pollen has not flowered as expected. Growth is impeded because there are chaos, disasters, and obstacles that need to be roughly cleansed. Revolution, like cleansing, is the removal of rubbish, the surgery of the superfluous, the conquest of inertia. It comes only when there are many things ready to die. Nigeria in truth, had died many times before.

We had fought the civil war and experienced many coups in the past. These deaths achieved nothing because attempts at a rebirth ended in still-birth. The country is again begging to be killed in all fronts, so that it shall be born gain”. The article treated those fronts as the elements of a revolution. We shall look at them again and determine the necessity of the ‘death’ of Nigeria.

The first element of a revolution the article recognized is what it called political element. Explaining that, the writer stated that “the death of our previous democracies was both violent and natural death. The fatal agents were the organic disorder of the system in the form of bribery and corruption, nepotism, thuggery and rigging of elections. The guns of rampaging coupists merely added the final blow”.

The article that is our standard bearer also talked about the legal element of revolution. After given particular instances to show what arbitrariness could do to the society, the article affirmed that “whenever the judiciary does not function the way it is supposed to, that is the sign of problem in the realm. When Solon, the law giver, was asked what made an orderly society, he replied ‘when the people obey the laws.’

In our country, the contrary seems to be the case. The law is treated like the spider’s web, which catches the small flies and leaves the big ones”. Do we not see this in operation daily in the country? While we were still rejoicing that the law has caught up with a bigger thief that stripped his State naked, through some judicial abracadabra, the big thief in question is now enjoying his loot, travelling from one island to another.