… Demand Due Process over Occupancy of Traditional Stool

Amidst the lingering rancour over the traditional stool of Awa Community, Orumba North LGA, Anambra State, about three villages collectively known as Umunzekwe and Ezeani, have celebrated their day, boycotting the Ofala Festival of Igwe Israel Ezue, the CEO of Marxis Tyres. The three villages are insisting that due process must prevail before the emergence and recognition of a traditional ruler.

The Nzekwe and Ezeana Day Celebration held at Obu Nzekwu Hall in Ndiuno Village, Awa, on the 8th of January, was celebrated concurrently as the Ofala Celebration of Igwe Ezue was ongoing at his Palace.

Fides gathered that the Villages, namely, Eziobuno, Eziobuikpa and Agbada, had been producing traditional rulers for the community since the 17th Century sequel to the victory which the three villages earned for the town during the period of inter-tribal wars that threatened the stability and existence of the community. 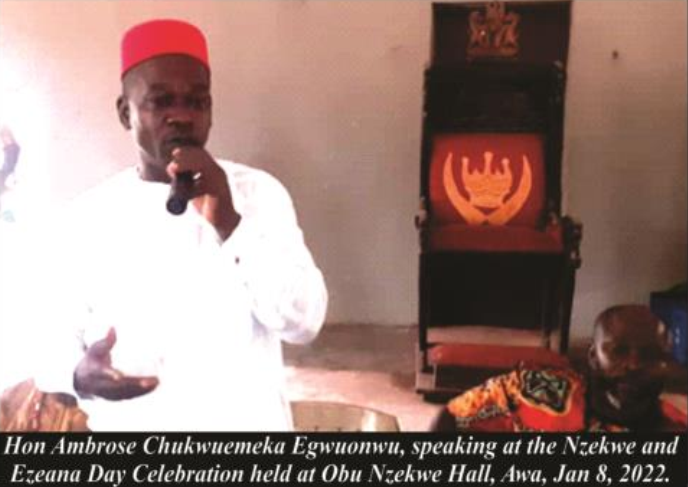 Fides also learnt that the victory made other villages in the community to unanimously agree, as contained in the 1977 Constitution of the town, that occupants of the traditional stool of the community would always come from the Nzekwe and Ezeana lineage and that for the constitution to be amended, an Igwe must supervise the committee for the amendment.

The simultaneous celebration of the alleged Ofala Festival and Umunzekwe and Ezeana Day was a clear confirmation of the fact that all was not well and that the town was gradually heading to anarchy and lawlessness resulting to pro and anti-Igweship groups in the community.

Speaking to Fides, the highest political office holder in Awa, Hon Ambrose Chukwuemeka Egwuonwu, explained that the Nzekwe and Ezeana Day Celebration held at Obu Nzekwe, the royal family and custodian of the town’s traditional stool, was to retrace history and enable people to be aware of their lineage, especially in the face of the current tussle over the traditional stool. He said that the Igweship of the community belonged to Umuezeana and Nzekwe, saying that it was an inviolable throne and therefore not contestable according to the town’s Constitution of 1976 and the 1977 White Paper of Anambra State.

He noted that it was an abomination for anybody from other part of the community to contest the igweship and disclosed that the constitution must be followed.

Hon Egwuonwu who is a member of Agbada Village of Umuezena Lineage, described himself as a firm believer of change being a constant and maintained that change must follow due process.

According to Egwuonwu, ‘for the Constitution of Awa Community to be amended, the amendment must follow due process and provisions recorded in the constitution, saying that there must be an Igwe who would either come from Umunzekwe or Ezeana for the amendment to be executed after the death of the last Igwe.

‘The lingering crisis over the traditional throne of the community has generated lots of petitions, both at the local and state levels. After the deliberations of the committees set up to look into the case of the traditional stool, it was upheld that for the constitution to be amended, there must be an Igwe on the throne and they should allow Umunzekwe to produce an Igwe for the community.

He said that Nzekwe and Ezeana Day Celebration would help to keep the people of the clan away from the venue of the said Ofala and prevent them from exhibiting their anger, which, he said, would have caused confrontation between them and the pro-Igwe group.

Adding his voice, the former Vice President General of Awa Development Union, Geoffrey Okoli, said the Umunzekwe and Ezeana Day Celebration was organized for the people of the clan to recognize the historic deeds of their forefathers, noting that it was why due process must be followed in the constitutional amendment.

Contributing, Chief Wilfred Nwankwo, who served as the Palace Secretary for 38 years, noted that the celebration was to bring the people of the clan together. He regretted that the Constitution of the town had been forged and expressed optimism that due process must be followed for peace to return in the town, as the traditional ruler, according to him, could not lead with a wrong Constitution.

However, the Traditional Ruler, Igwe Israel Ezue, at the Ofala Festival which was held concurrently with the Nzekwe and Ezeana Day Celebration, pledged to work with all quarters in Awa Community to promote development in all sectors. He beckoned on all, especially those who contested for the traditional stool with him, to sheath their swords in the spirit of one love, peace and unity.

Reacting through a phone interview, Igwe Ezue maintained that he was never against the Ezeana and Nzekwe Day Celebration as the indigenes of the community were free to celebrate whenever they deemed fit.

Igwe Ezue who said he held no grudges against anyone or any quarter of the community, expressed readiness to work with all in the community.

Also reacting, the President General of the Community, Dr. Ray Offor, disclosed that he had set up a committee that would look into the various accusations and grievances regarding the traditional stool and resolve the lingering issues amicably.

He expressed optimism that the committee would unite all interests, saying that it would enable them to achieve a greater Awa Community.