The NYSC Coordinator for Borno, Nura Umar, made the call during the closing ceremony of the 2022 Batch ‘B’ stream one orientation Tuesday in Katsina state.

The NYSC members posted to Borno were being deployed to Katsina for their three weeks orientation exercise.

The coordinator also urged them to concentrate and embark on their Community Development Services (CDS) projects immediately for the development of their host communities.

According to him, such will give them the opportunity to impact positively on the lives of their host communities, especially in the area of education, health, water, among others.

Umar told the youth corps members that the scheme was collaborating with security agencies to protect them.

He announced that the NYSC members, comprising 469 females and 476 males, went through the COVID-19 screening before having access to the camp, and they all tested negative. 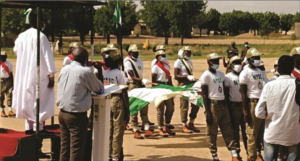 He commended the Borno and Katsina State Governments, security agencies and other stakeholders for the support given, them during the three weeks orientation.

In Kaduna State, Gov. Nasir El-Rufai, said the state government was passionate about the security of NYSC members and other citizens of the State.

The Governor of Kaduna State represented by Hajiya Hafsat Baba, the Commissioner for Human Services and Social Development, the governor said that the security of citizens, including youth corps members, was paramount to ensure continued development for the benefit of all.

He tasked employers of labour to accept NYSC members posted to them and assist them in settling down to enable them to serve the nation.

He said rejection of youth corps members was against the spirit and noble intentions behind the establishment of the scheme.

In Kebbi, the youth corps members were urged to use lessons learnt during the three weeks orientation and places of primary assignments to develop their host communities.

The Director-General of the scheme, Brig. -Gen. Muhammad Fadah, gave the advice at the end of the 2022 Batch `B’ Stream I orientation course at the NYSC permanent orientation camp in Dakingari, Suru Local Government Area of Kebbi on Tuesday

Represented by the NYSC Coordinator in the state, Alhaji Mustapha Mohammed, Fadah admonished the youth corps members to respect and learn the culture of their host communities and abide by the rules and regulations of places of primary assignment, as well as avoid any act that could endanger their safety.

Elsewhere in Keffi, Nasarawa State, the NYSC boss, also at the closing ceremony of the 2022 Batch B stream1 orientation course held at the Magaji Dan Yamusa NYSC Permanent Orientation on Tuesday, advised the youth corps members to desist from travelling from their places of primary assignment once it is 6 p.m.

Represented by Abdullahi Jikamshi, the Coordinator of the scheme in the state, Fadah congratulated the 1,190 youth corps members who completed the three weeks orientation course and warned them against unauthorised journeys during the service year.

He said ‘travelling at night would not only increase the risk of an accident, but also make rescue difficult.’

In Bauchi State, the director-general advised the youth corps members to avoid wrongdoings wherever they find themselves, as they have no immunity from legal consequences.

Fadah told NYSC members deployed to Bauchi after the three weeks orientation which took place at Wailo, Ganjuwa Local Government Area, that ‘remember that your membership of the service does not confer on you immunity from legal consequences of any wrongdoing.’

Represented by the state NYSC Coordinator, Alhaji Namadi Abubakar, the director-general urged employers to accept youth corps members posted to them and make necessary provisions for their welfare.

He also urged local government authorities as well as traditional rulers to mentor them to enable them to develop their potentials.