National Youth Service Corps has unveiled the maiden edition of the Director-General’s Community Development Service Award where corps members and Staff were rewarded for outstanding performances in the sphere of community development service. 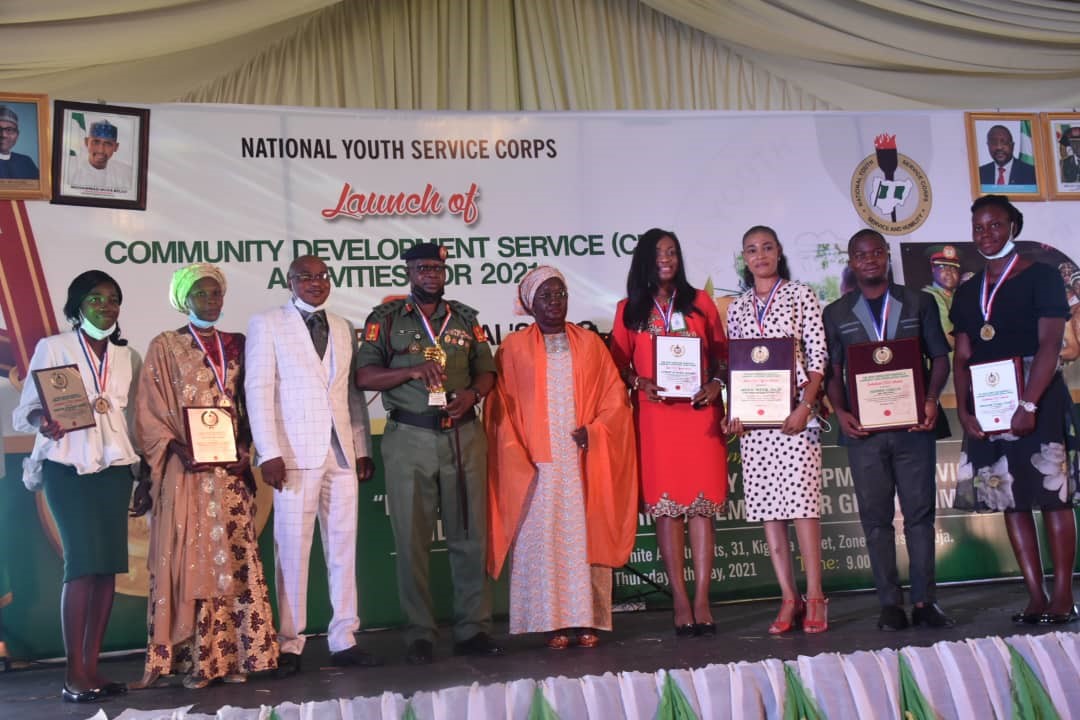 Brigadier General Shuaibu Ibrahim, Director-General, NYSC, 4th from left with some dignitaries and awardees at the maiden edition of the Director-General’s Community Development Service Award 2021

The occasion was also used to launch community development service activities for 2021. Brigadier General Shuaibu Ibrahim, Director-General, during the award presentation, said the engagement of corps members in community development service instil in them patriotic spirit, leadership skills, team spirit, among others. He added that their efforts have not only helped to bridge the imbalance in rural-urban development, but also reawakened stakeholders’ consciousness regarding the needs of the rural dwellers.

He commended the award recipients, adding that successive batches of Corps Members have served as foot soldiers in the implementation of different community development service projects across the country.

‘The idea of annual launch of CDS activities and the institution of awards will not only give additional impetus to this cardinal programme, but also spur both the Corps Members and the CDS Field Officers to greater performance. I am confident that the philosophy of community development service you have imbibed during the service year will be put into practice in the various leadership positions you may find yourselves.

‘While l heartily congratulate the award winners, it is my hope that this initiative will translate into greater results in the implementation of the community development service,’. DG said.

Ibrahim further stated that though corps members’ activities on CDS projects are geared towards accelerating development, especially at the grassroots, there is the need to intensify material, financial and technical support to actualise timely completion of such projects.

‘The usual fervour associated with CDS activities have continued to dwindle in recent years due to poor incentives for Corps Members who execute projects, lack of support from community leaders, inadequate financial and material resources and technical challenges,’ the DG added.