He said the management of the scheme established NYSC National Cultural Troupe and introduced NYSC Cultural Festival which he noted was an avenue for corps members to showcase their talents and also promote the rich cultural heritage of the Nigeria. 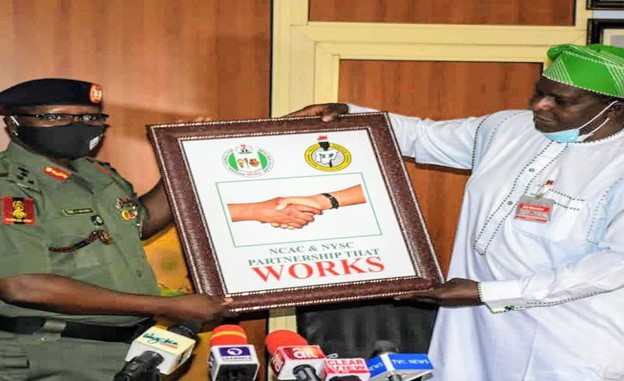 The Director-General urged Otunba Runsewe to visit the orientation camps to address corps members on the need to use their talents positively and avoid social vices.

‘Kindly make your expertise available to us by coming to our camps to address Corps Members. Also invite our Corps Members to perform at National and International festivals’, NYSC helmsmen said.

Speaking further, Ibrahim disclosed that the Scheme is working on a film that would educate the general public on the NYSC Act, statutory responsibilities of all stakeholders to the Scheme and also showcase the contributions of the Scheme to national development.

In his remarks, the Director-General, National Council for Arts and Culture, Otunba Olusegun Runsewe described NYSC Scheme as a tool for fostering national unity, adding that the NYSC has the largest number of inter-tribal marriages in the country through its deployment policy.

Otunba Runsewe who commended General Shuaibu Ibrahim for his initiative to launch a better platform for the future of Nigerian youths said there’s the need to provide a conducive environment for the Nigerian youths to thrive for better self expression.

He said, ‘We must engage our youths from the beginning. Together, NYSC and NCAC can make Nigeria great because the two agencies are a coin of two sides,’.

The DG NCAC added that the partnership would also reduce unemployment and crime rate among youths.

He appealed to corps employers not to reject corps members, but rather provide an enabling environment for them to discharge their statutory responsibilities and also showcase their individual talents for national development.