The NYSC Ebonyi led, by the state coordinator, Mrs Bamai Mercy has taken the lead in a freedom Run and walk programme  organised by the Spotlight Initiative to end violence  against women and girls. The programme which was initiated by European Union and the United Nations in conjunction with the Center for Youth, Sports and Development, aims at using sports as a tool for awareness creation. 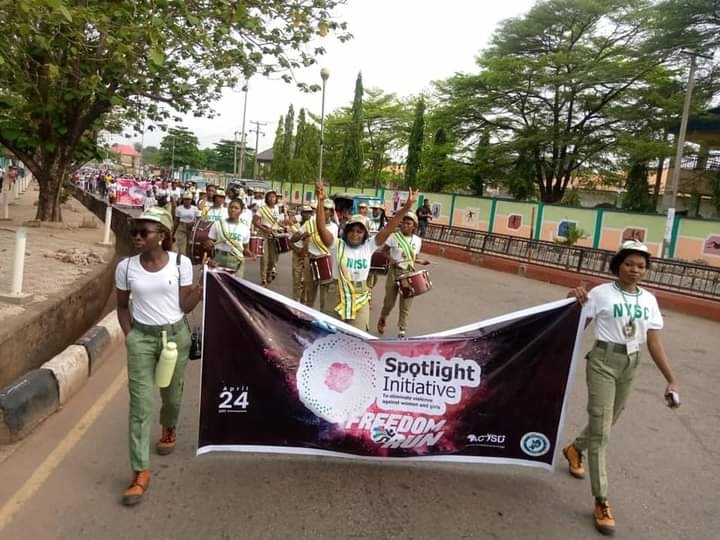 Declaring the event opened, His Excellency the Executive Governor of Ebonyi state, Engr Dr  David  Nweze  Umahi, who spoke through his Deputy, Barrister Eric Kelechi  Igwe, disclosed that Ebonyi State has been in the fore front in the fight against gender based violence, and will continue to do so till the battle is won.

The two kilometer walk and run which started from the Township staduim by 7:00 am, saw the NYSC Board  Chairman, NYSC band, NYSC Ambulance, Corps Doctors, NYSC staff  with the state  coordinator taking the lead among  other  Government officials, civil society members, students  security Agencies  and press men, that participated in the event.

Fielding questions from News men, Mrs Bamai condemned in very strong terms ,violence against women and girls, calling for the end to it. She explained that what NYSC was doing, was not new to them,  since  we  have been in  the fight  to end violence  against women and the girl child.

The walk and run programme, ended at the Ecumenical Centre Afikpo Road, with much pomp and pageantry.