The National Youth Service Corps (NYSC) says it is an offence for corps members to paint the scheme and the nation bad on social media and consequently, warns against it.

Brig. Gen. Shuaibu Ibrahim, Director-General of NYSC, made the disclosure in his address at the closing ceremony of the orientation course for the 2021 Batch C, Stream 1, held on Tuesday at NYSC Temporary Orientation Camp, Iyana-Ipaja, Lagos. 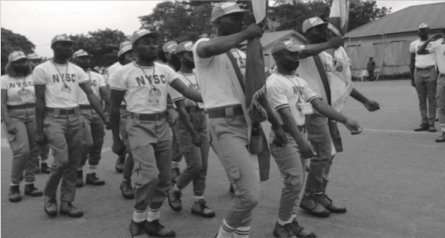 Fides gathered that Ibrahim was represented by Mr Eddy Megwa, Coordinator, NYSC Lagos Office, at the passing-out of the 2,015 Corp members.

‘It is not in your place to go into the social media to paint the scheme which you are part and parcel bad, but you are rather expected to use the platform to your credit and NYSC.

‘It is, therefore, an offence to have any corps member to go into the social media space to paint the scheme or nation at large in a bad note.’ he said.

The NYSC director general also warned the corps members against travelling at night, while stressing on the need for them to be more security conscious as they embark on the second phase of the scheme.

‘Avoid travelling as much as you can, and in case you are on transit and is getting late after 6:00 p.m. please endeavour to pass the night there and save your life.

‘Be reminded that it is no longer what you do as usual, the society of today is very very strong, don’t walk alone, I therefore call on you to be more security conscious,’ he said.

Ibrahim further tasked the corps members to discharge their duties credibly and exhibit good behavior in places of primary assignment .

‘We expect you as you move to the larger society to showcase that you have been well trained and equipped to deliver your mandate in the service of your fatherland,’ he said.

The D-G applauded the Governor of Lagos State, Mr Babajide Sanwo-Olu, on his continuous support and efforts put in place to make the orientation camp memorable for corps members.

He, however, reminded the governor on the completion of the ongoing permanent site in Agbowa, Ikorodu, adding that the temporary Iyana-Ipaja camp was becoming grossly inadequate for corps members deployed to the state.

Ibrahim who described Sanwo-Olu as proactive, expressed confidence that the governor would speed up activities and get the permanent site ready soon.

He urged Lagos residents to receive corps members with open hands, while appealing to landlords to subsidise their tenancy rate to the affordability of the corps members during the one year mandatory service.

Also, some camp officials were recognised for outstanding performances in the discharge of their duties and administration of training to corps members during the three weeks orientation camp.