The Director General of the National Youth Service Corps (NYSC), Brigadier General Shuaibu Ibrahim has commended the Supreme Council of Traditional Rulers of Ogoni for creating a peaceful atmosphere for the scheme.

The NYSC Director, Press and Public Relations, Adenike Adeyemi (Mrs), in a statement on Monday said Brigadier Ibrahim made the commendation during a courtesy visit to the Chairman of the Council and Gbenemene of Tai Kingdom, His Royal Majesty King G.N. K. Gininwa.

Ibrahim acknowledged the efforts of the traditional rulers at providing a peaceful atmosphere for the operations of the Scheme, especially at the NYSC Permanent Orientation Camp, which is located in the area. 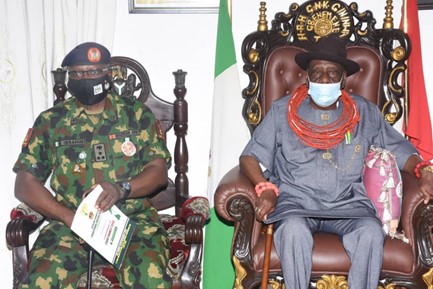 The Director-General said the Scheme was committed to strengthening its cordial relationship with the Royal Council and people of Ogoniland for mutual benefits.

He requested the paramount ruler to convey appreciation of NYSC Management to Governor Nyesom Wike for supporting the smooth operation of the Scheme through numerous gestures including the building of 5,000-capacity hall which is at advanced stage at the Orientation camp, general renovation of the camp and construction of internal roads.

Earlier, King Gininwa had expressed gratitude to the Director-General for showing love to Ogoniland, and prayed God to continue to guide him in steering the affairs of the Scheme.

The Royal Father noted the role of NYSC in national development and assured of the Council’s support for its success.

He recalled that the choice of the area as location of the Orientation Camp was informed by the quest for a peaceful environment, adding that the traditional council would continue to ensure the safety of Corps members and Staff of the Scheme.