NYSC DG Condoles with Akwa-Ibom Government over Death of PCMs

Brigadier General Shu’aibu Ibrahim, Director-General, National Youth Service Corps, NYSC, has condoled with the Government and people of Akwa-Ibom State over the death of four Prospective Corps Members who are indigenes of the State.

In his condolence message which he personally delivered to Governor Udom Emmanuel, Executive Governor, Akwa-Ibom State, the Director-General expressed shock over the news of the demise of the ‘promising patriots who were full of enthusiasm and vigour to serve their fatherland’. 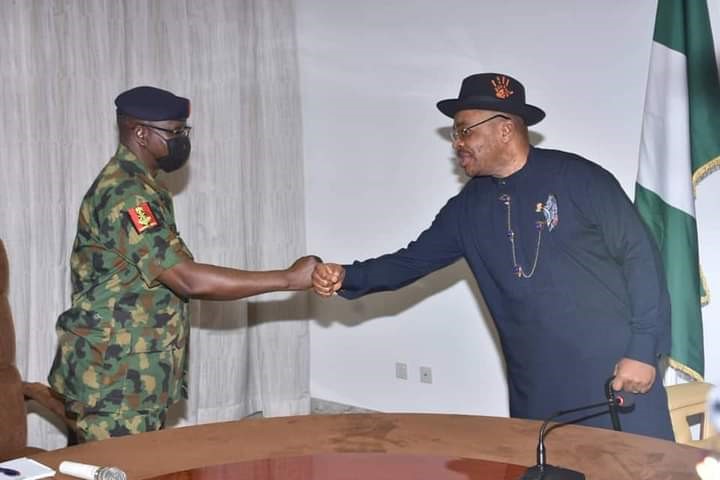 He added that the death of the Prospective Corps Members is a great loss not only to their families and Akwa-Ibom State, but the entire NYSC and the nation at large.

Ibrahim said he was in the state to condole with the immediate families of the deceased Prospective Corps Members and the people of the state having been at the scene of the accident on receiving the sad news.

DG prayed for the repose of the souls of the departed and quick recovery of the injured Prospective Corps Members. He assured that the NYSC Management will accord them all necessary care and attention while ensuring that they are considered alongside their colleagues who have already reported to the Orientation camp. He thanked the Governor for receiving him and members of his entourage even at short notice

In his response, Mr Emmanuel thanked the NYSC DG for his empathy and responsiveness to the plight of the Prospective Corps members, adding that the visit was a mark of honour to the bereaved families and the state at large. He commended him for always according priority attention to the welfare of Corps Members.

The Governor also instructed that Transport Companies operating in the state to desist from conveying Corps Members at night adding that any company found flouting this directive will be sanctioned accordingly.

He joined the Director-General in condoling with families and the good people of Akwa-Ibom State over the loss and prayed for the repose of their souls.

The NYSC Director-General also paid a similar visit to the Vice Chancellor of the University of Uyo, Professor Nyaudoh Ndaeyo, whose graduates were involved in the unfortunate accident

The Vice Chancellor while commending the DG for the visit advised that the NYSC can engage reputable Transport Companies for the purpose of transporting Prospective Corps Members especially after the release of call-ups.

The Director-General was accompanied during the condolence visits by the Directors of South-South Area Office and Special Duties alongside the State Coordinator, NYSC AKwa-Ibom State.

Fides­­­ recalled that fifteen (15) Prospective Corps Members were involved in a Road Traffic Accident (RTA) along Abuja-Lokoja Express Way on Wednesday, 28th July, 2021 on their way to report to the Orientation Camp for the one-year compulsory National Service.