Brigadier General Shuaibu Ibrahim, Director-General of National Youth Service Corps, NYSC, recently received an award as he was presented the Sun Awards 2020 for Public Service by the Publishers of The Sun Newspapers at a grand ceremony held in Lagos. 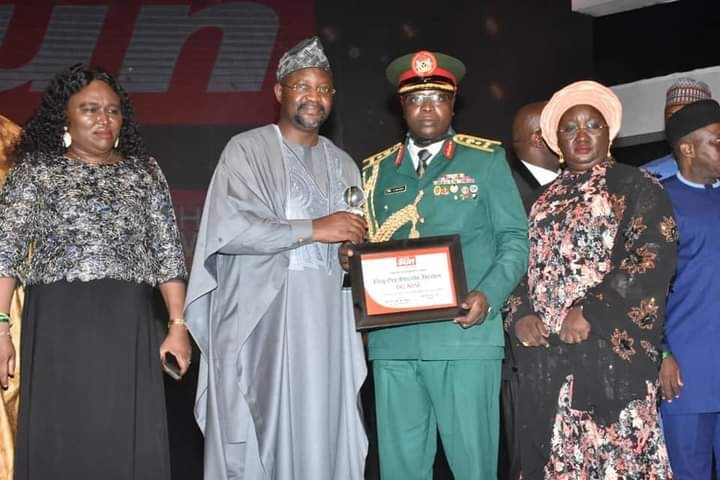 In a short video aired before the Award presentation, Management of the SUN Newspapers said General Ibrahim was considered for the award because of the unprecedented changes he has brought to the National Youth Service Corps as the 18th Chief Executive of the organisation.

His collaboration with several agencies and financial institutions that seek to empower members of the corps were also presented as attributes that make Brigadier General Ibrahim an exceptional leader deserving of the award.

Mr. Sunday Dare, Minister of Youth and Sports, who represented the Secretary to the Government of the Federation, Boss Mustapha, praised the Management of Sun Newspapers for sustaining the award ceremony for eighteen years and the rigorous selection process that ensured only deserving individuals were selected for the prestigious award.

Twenty individuals were given awards for Public Service, Philanthropy, Business and Technology at the well-attended ceremony. Also in attendance were the Governors of Edo, Kano and Ondo States, while Kogi, Yobe and Borno Governors were represented by their Deputies.

Brigadier General Shuaibu was accompanied by his wife, Mrs Martina Ibrahim and some Directors to accept the Award at the 18th Sun Awards 2020. Another winner in the same category was the Chairman of the National Drug Law Enforcement Agency (NDLEA), Brigadier General Buba Marwa rtd.