This writer will resist the near- irresistible temptation to sound scriptural because this piece is not about a Reverend Father in one corner of the world but about someone whose instruction from the President of his nation is to make significant changes towards positive direction for the 48 year old national institution known as the National Youth Service Corps scheme (NYSC), Major General Shuaibu Ibrahim, Director- General, NYSC.

I spoke about resisting a temptation to sound like someone writing on theological matters because the title of this piece owes its etymology from a highly revered and venerated religious icon that commands the adulation and worship of billions of people around the globe.

However, looking at the title from a holistic perspective, the picture that emerges in our subconscious is the yearning by a leader for critical appraisal and assessment from his close lieutenants concerning the general views about his personal life and activities.

In the school of leadership, what contributes significantly to reaching success is the inclination by the leader to ascertain what exactly people think about him/her and the impacts made or being made as a result of the implementation of his/her tasks. 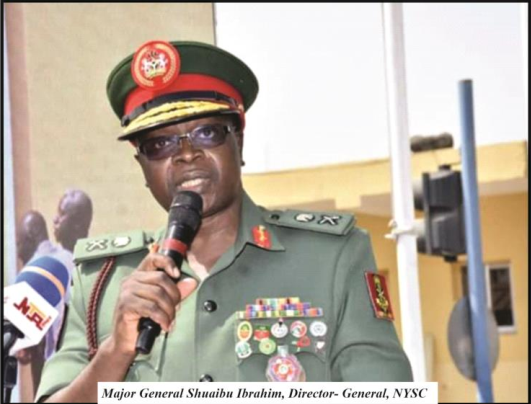 This is called FEEDBACK mechanism and even in the media industry, newspapers and broadcasting houses have space and time for their audiences to feed them back on their opinions concerning quality control or lack of it in the works of those media houses. In other words, media houses such as newspapers usually concede a page which they devote to people’s opinions and letters to the editor.

In this reflection we will do some contents analysis of what the media has in the last two years written about the person of the Director General of the National Youth Service Corps Major General Shu’aibu Ibrahim who just got elevated in his professional rank from his hitherto rank of Brigadier General to a Major General which in the military circles is regarded as a reward for excellence, merit and competence because military promotions are performance and merit based.

I said unexpected because it is generally known that prophets are almost always not respected and celebrated in their hometowns literally but in the case of Major General Shuaibu Ibrahim, it would seem that the general rule was suspended and his own people of Nasarawa State and his primary constituency the military have celebrated him and have made it abundantly clear that they are proud of the modest achievements he has made in the NYSC specifically and in virtually all of his career history.

He made the commendation recently when he played host to the Director-General, who paid him a courtesy visit in his office.

Describing Ibrahim as a source of pride to the Nigerian Armed Forces, he remarked that his achievements in NYSC were consistent with the qualities of hard work, dedication, selflessness and dynamism, which he demonstrated in his previous appointments.

General Yusuf recalled the Director-General’s contributions to the success of the NDA, especially as Head of History and War Studies Department as well as TETFUND Desk Officer.

He noted Ibrahim’s leading roles in securing accreditation for courses of the History and War Studies Department, adding: ‘It was to his credit that NDA hosted a conference of the Historical Society of Nigeria for the first time,’ he added. He also said his achievements in NYSC did not come as a surprise given his known standard of performance.

The Commandant congratulated Ibrahim on his promotion to the rank of Major General, describing it as well deserved. He assured that the Academy would continue to support the Scheme, especially in the area of Corps Welfare.

The NYSC Boss thanked the Commandant for the mentorship he enjoyed from him, describing him as a thoroughbred senior officer. He expressed appreciation of the support NDA had been extending to NYSC, especially as one of the largest Corps employers. Ibrahim particularly thanked the Commandant for prioritising the welfare of Corps members, including provision of accommodation and feeding for them while on transit. He assured that the Corps Members would continue to put in their best in the service of the fatherland.

From his State, Abdullahi Sule, the Governor of Nasarawa State described the recently promoted Director General of the National Youth Service Corps Major General Shu’aibu Ibrahim as a worthy ambassador of Nasarawa people for his strategic role in redefining the operations of the NYSC Scheme as a catalyst of development.

He said his achievements were testified by the Founding father of the NYSC General Yakubu Gowon and many State Governors who appreciated his impactful leadership in reinventing the NYSC and making it more relevant.

He paid glowing tribute to General Shu’aibu, and admitted that the DG worked hard to deserve his elevation especially in the area of empowering corps members through Skills acquisition and entrepreneurship development, reinvigoration of NYSC ventures and ensuring provision of a comprehensive documentation of NYSC activities and interventions in national development agenda.

Speaking further, Sule commended the new policy drive of the NYSC aimed at empowering corps members through acquisition of skills for self-employment which he said is the best option out of the problem of unemployment for our teeming graduate youths .

Sunday Dare, Minister of Youth and Sports Development , represented by his Permanent Secretary, Alh Isma’ila Abubakar, commended the Director General for providing the required leadership which motivated staff to support him in achieving the successes recorded. He urged him not to relent in his efforts to further elevate the NYSC Scheme to greater heights.

In her remarks on behalf of NYSC Staff and Corps members nationwide, Mrs Christy Uba, Director, Information and Communication Technology, ICT, enumerated the achievements of General Shu’aibu to include among others; optimum utilisation of the potentials of corps members, reinvigoration of NYSC Ventures and Skill Acquisition and Entrepreneurship (SAED) programme, enforcement of a credible mobilization process, documentation of NYSC activities , enhancement of staff and Corps welfare, provision of ICT Centre, proposed NYSC Radio among others.

Responding thereafter, General Shu’aibu thanked God for His grace in his successive elevation in the Military and appreciated the Governor of Nasarawa State, Community Leaders, Staff and Corps members for the uncommon honour.

The NYSC Director General expressed gratitude to President Muhammadu Buhari for finding him worthy to be so appointed as the Chief Executive of the NYSC Scheme. He equally appreciated the Minister of Defence and Chief of Army Staff for believing in his capacity and their endorsement of his promotion to the rank of a Major General after earning a steady elevation in the last 28 years of his career.

The DG further stated that his principles in life is targeted towards touching lives and pledges to devote his life in furtherance of this philosophy. ‘All I have achieved in life was as a result of prayers of those I have come across in the course of my life’, he stated.

He commended various stakeholders of the Scheme for their support and called on them to sustain their advocacy for the success of the proposed NYSC Trust Fund which aims at empowering youth Corps members and addressing infrastructural challenge of the Scheme.