The Director-General has also got direct commendation from his erstwhile department where he headed before he got appointed by President Muhammadu Buhari to reorganise, reshape, reinvigorate the NYSC which he has so far made remarkable and appreciable evolutionary achievements.

As stated earlier, the Department of History and War Studies of the Nigerian Defence Academy had hosted the NYSC Director-General, Shuaibu Ibrahim, to a reception in celebration of his promotion to the rank of Major General.

Speaking on the occasion, the Head of Department, Associate Professor Victor Akran, expressed appreciation of the Director-General’s sustained passion for the Department and the entire NDA. He recalled the various feats achieved by Ibrahim as Head of the Department, and expressed gratitude to him for remaining supportive. The HOD also congratulated the Director-General on his promotion and prayed God to continue to elevate him.

Responding, the Director-General reminisced on the cordial working relationship he enjoyed with all Staff of the Department noting that, that contributed to the successes recorded. He thanked them for honouring him, and assured that the relationship would continue to be strengthened.

The Director-General also used the occasion to eulogize the NYSC family for giving him all the necessary support leading to his success as helmsman of the Scheme. Still from the academia came a plethora of commendations for the Director-General of NYSC. 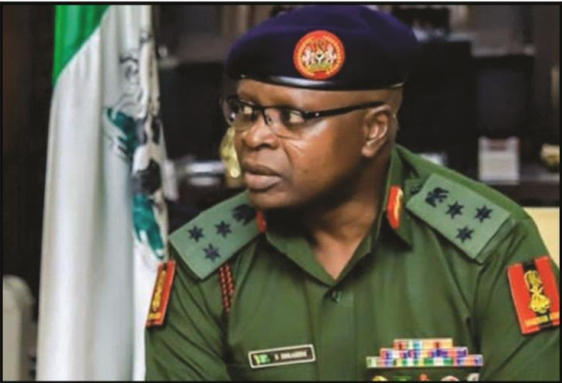 The Management of Federal University Lokoja joined the league of eminent Nigerians to congratulate the NYSC Director-General on his elevation to the new rank of Major General in the Nigeran Army.

The Institution’s Vice-Chancellor, Professor Olayemi Akinwumi, who led a delegation from the institution to deliver the congratulatory message to Major General Shuaibu Ibrahim in his office in Abuja recently, said the University is delighted to associate with the landmark achievements recorded by the DG since he assumed duty in NYSC.

He canvassed support for the continuity of the NYSC Scheme especially the Skill Acquisition and Entrepreneurship Development programme, adding that SAED has empowered a large number of graduate youths to become self reliant.

The don, who relayed his service year experiences added that, ‘We are proud of what you and your team are doing. NYSC must be protected because it is for the unity of the country.’

In his response, the NYSC Director-General, Major General Shuaibu Ibrahim congratulated the Vice-Chancellor on his appointment and lauded him for the congratulatory visit.

He added that NYSC has been interfacing with relevant institutions like the National Universities Commission (NUC), Joint Admissions and Matriculation Board (JAMB), National Board for Technical Education (NBTE), among others to inject more sanity into the mobilisation process of eligible graduates for national service.

Major General Ibrahim said there was the need to review the school curriculum and introduce Skill Acquisition and Entrepreneurship Development as it would expose students to vocational skills before they graduate.

He said the Scheme has partnered many institutions like the Central Bank of Nigeria (CBN), Bank of Industry (BoI) Access Bank, Heritage Bank, Leventis Foundation and other agricultural institutions like NALDA and ARMTI towards training and empowerment of Corps Members that have passion for agriculture.

The DG added that efforts are on top gear for the establishment of NYSC Trust Fund which will make funds available to Corps Members to start their businesses as they exit service. He said the proposed Trust Fund would also enable improved maintenance of Orientation Camp facilities and NYSC Skill Acquisition Centres across the country.

‘We urge the Federal University Lokoja and other stakeholders to support us in youth empowerment’, the DG added.

During the visit, the Director-General led the University team on a tour of the NYSC Museum and NYSC Radio Studio, both at the National Directorate Headquarters Abuja. In a similar development, the Abuja Zonal Head of TAJ Bank, Mellisa Adesina led a delegation from the bank to congratulate Major General Shuaibu Ibrahim on his recent elevation. She said the bank is working on a modality to partner NYSC on Entrepreneurship Training for Corps Members and also contribute its quota to national development.

General Ibrahim appreciated the bank and promised the Scheme’s readiness to improve SAED programme and reduce unemployment in the country.

Around March 5, 2020 almost a full year before he got promoted, the DG made a remark to Corps Members that goes to define his passion for seeing that the youths are economically empowered to stand on their own after the mandatory one year national service.

Ibrahim saluted the patriotic spirit and commended the efforts of the corps members during their service year and also acknowledged that they have positively impacted the socio-economic well-being of the host communities.

‘Indeed, Nigerians deeply appreciate your contributions to the national development process, especially in the areas of education, healthcare delivery, agriculture and infrastructure as well as the uncommon patriotism and diligence exhibited in the discharge of your responsibilities in your respective host communities,’ he said.

The NYSC DG said the corps members exemplary selfless service rendered at the place of their primary assignment and community developments efforts are truly worthy of commendation.

‘Your affinity to your host communities during your primary assignments should equally form the basis of life-long friendships, national unity and integration, which is the major reason for establishing the NYSC Scheme.

‘My dear compatriots, the end of the service year represents an important period in the life of every Corps Member. It marks the end of a phase of dependence on the government, parents and guardians for upkeep. It is a period when those who have imbibed the lessons of the service year are ready to explore and conquer the wider world,’ Ibrahim said.

He added that the passing out corps members have been adequately equipped for the future with their exposure to the realities of life during their national assignment.

Have you now known who the people say the Director-General of NYSC is? Now here are snippets of some reasons for these praises.

Without any shadow of doubts, the DG of NYSC said the scheme remitted over N1 billion into the federation account between 2020 and 2021. Ibrahim said the money was generated from different business initiatives established by the NYSC.

He told Nigeria’s Permanent Representative to the United Nations, Tijjani Bande, who paid him a courtesy visit in Abuja recently.

‘…in an unprecedented feat, the Scheme remitted over one billion Naira generated as revenue from its various ventures to the federal account between 2020 and 2021,’ he said in a statement issued by the scheme’s Deputy Director Press and Public Relations Emeka Mgbemena.

Findings show that the NYSC Ventures were created in 2012 as training and mentoring platforms for corps members interested in entrepreneurship development. Initiatives and funds generated through the ventures are expected to contribute to the nation’s Gross Domestic Product (GDP).

Also, there are also NYSC Farms in Kwali, FCT, and Saminaka, Kebbi State.

Meanwhile, in a bid to enhance credibility of the mobilisation process and safeguard the nation’s education system, the DG announced it held separate meetings with corps producing institutions based in some African countries, including relevant Nigerian regulatory and professional bodies.

Other achievements listed by the DG were the completion of NYSC North-West and South-West zonal skill acquisition centres, the commencement of work on the centre for the North-Central; publication of nine books on the achievements of the scheme; the establishment of a museum; the process of establishing the NYSC Radio, and the construction of NYSC Printing Press in Kaduna State.

Earlier, Bande had applauded the scheme, describing it as a well-thought-out initiative for youth engagement in the nation.

He stressed that matters of youth development were central to the progress of any country, adding that Nigeria had, through the NYSC, demonstrated recognition of youths as critical assets.

The diplomat, who noted that the scheme had broadened the knowledge of youths about the country and instilled patriotic zeal in them, also expressed delight at its current focus on the empowerment of corps members for self-employment.

He commended Ibrahim for his achievements since taking office as chief executive of the scheme.

To answer the question, I think it is appropriate to say that people say the Director-General of NYSC Major General Shuaibu Ibrahim is a charismatic leader who has passion for building legacies that will make transformational changes in Nigeria and the World at large.