NYSC can be a tool for national unity

Reading a newspaper story online became such a beautiful experience going by the topic and the panoramic pictorial highlights that demonstrate the resilience of the National Youth Service Corps scheme.

The photo story was that of a man who served in 2004 and was shown giving his daughter clean shirts of his NYSC heralding a transition programme from his epoch to her because she is set to be posted to serve in the coming batch of the NYSC. These photos instigated this piece, which argues that the NYSC remains a tool not just for social mobilization and community development but also a veritable asset that enhances the unity of Nigeria.

The authors of a new book on the NYSC scheme vis-a-vis community development also elucidated the aforementioned points.

Hear them: “The overarching goal of every community Development project of the NYSC is to contribute to the welfare of the society, to leave a mark of honour and a legacy worthy of emulation behind. Thus, its impact is felt by the Community, the corps members and all other individuals who come across such projects.”

In his remarks during the inauguration of the Directorate of the Scheme in 1973, the founding father of NYSC and former Head of State of the Federal Republic of Nigeria; Gen Yakubu Gowon informed the nation that… “The idea of a Service Corps for youths is quite unexceptionable… certainly no right-thinking and patriotic persons will query the need for Nigeria to inculcate, as a matter of deliberate public policy the qualities of leadership to her most educated and enlightened youths from among whose ranks leaders in all walks of life are recruited”.

Accordingly, youthful energy and talent are better harnessed and unreservedly directed to those things, which make for the realisation and retention of the ideals, which enable a nation to rise above its history and attain heights that would have been deemed unattainable.

The rationale for the establishment of the NYSC points towards addressing some of the fundamental issues of the civil war by actively promoting the ethos of unity and cultural integration that is relevant to the national identity question. The national question of Nigeria can be viewed from three critical perspectives; the ethno-relativist perspective, class perspective and the identity perspective. 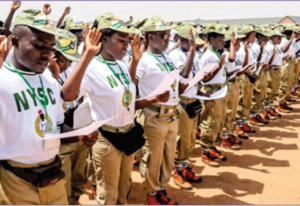 Although the ethno-relativist and class perspectives have dominated mainstream national development discourse, national identity has emerged as the most dominant discourse in contemporary Nigeria.

In the formation and negotiation of multiple identities, youths are constantly engaged in struggles for survival, inclusion, participation and empowerment for national development.

As positive agents of ‘change’, analysts argue that youths have been instrumental in shaping the dynamics of national unity and integration between different ethnic-nationalities, and in reversing ‘otherness’ and hierarchical dominance over ethnic minority regions and groups.

In this context therefore, the extent to which youths become an ‘agency of bridging the inter-ethnic and religious divides in Nigeria’ is dependent on how effectively the NYSC can transform and channel youth resources and identity capital.

This explains why the first pre-condition for participation in the national development process through the NYSC is to imbibe the culture of ‘discipline’. The Nigerian government made the scheme militarised and regimented so that the scheme can have control, because if youths, immediately after they finish university get thrown into the society without discipline, they are going to have more problems.

So, the one year of compulsory service is a way of stabilising them (the youths) so that after they have seen life in the university, the NYSC can enforce some little discipline in youths using the military and then have a lot of control over what youths do.

The NYSC scheme was designed to actually address the youth restiveness in Nigeria occasioned by inter-ethnic and religious divides. The NYSC came in to see how it can address youth restiveness by actually bringing discipline into the system.

This mechanism of disciplining youth behaviours, which the NYSC scheme and its associated youth capability development activities provide, allows for ‘control at a distance that justifies the need to build and enforce disciplinary structures.

This ethnoreligious narrative suggests that the NYSC is fulfilling some of its aims as stipulated in the establishing decree and act. The participation of Nigerian graduate youths in the NYSC programme is known to have established enduring friendships, interethnic marriages, political alliances, and business partnerships transcending ethnic and cultural boundaries.

However, the contemporary reality of religious extremism and intolerance in Nigeria has called into question the success of the NYSC in pre-empting this conundrum, particularly as some of the actors in this crisis have previously participated in the NYSC programme.

For instance, the Bill before the House of Representatives seeking the discontinuation of the National Youth Service Corps (NYSC) has received knocks and cheers from a host of Nigerians. The Bill, sponsored by Awaji-Inombek Abiante, representing Andoni-Opobo/Nkoro Federal Constituency of Rivers State, which seeks to repeal Section 315(5)(a) of the Constitution of the Federal Republic of Nigeria, 1999 (as amended) has already passed the Second Reading.

“Due to insecurity across the country, the NYSC management now gives considerations to posting corps members to their geopolitical zone, thus defeating one of the objectives of setting up the service corps, i.e. developing common ties among the Nigerian youths and promote national unity and integration.”

However, some respondents have expressed support for the bill, saying NYSC has outlived its usefulness and should either be restructured to meet current realities or scrapped outright.

For all of Nigeria’s existence, ethnic and religious differences have been too frequently weaponised by those seeking to obtain or retain political power. Given this history, expecting a program to bring national unity is a tall order, one that NYSC has struggled to fill.

Some would argue that Nigeria is no more united now than it was in 1973 when NYSC was created. Even if this were true, it is an invalid comparison. What we should be asking is: would Nigeria today be less united if NYSC did not exist? That question may be difficult to answer, but looking abroad could lend us some perspective.

As some uninformed Nigerians tend to lose faith in its national service programme, many countries are bringing theirs back. In June 2018, France reintroduced a mandatory service requirement for all 16 year-olds in the hope that it will foster nationalism and counter the youth restiveness caused by high unemployment rates.

One could argue that the NYSC budget would be better spent on improving civic education in schools but deficiencies in Nigeria’s education system would limit the effectiveness of an improved civic education curriculum. Furthermore, France’s decision to invest in a national service program, even with the civic education option available, is telling.

Again, if national unity is the goal, then making it voluntary would defeat its purpose. People with better-paying opportunities elsewhere would opt-out. And because the rich tend to have better access to political power, this could lead to a situation where the political elite charged with fostering nationalism missed out on a significant nation-building opportunity.

Nonetheless, it would be disingenuous to pretend that NYSC is perfect. One of the scheme’s major shortcomings before now is its misuse of human capital and for a lot of people, it is a waste of time. According to this school of thought, too many corps members get assigned to government offices or Community Development Service (CDS) groups that do not utilise their skills in any meaningful way.

Yet others believe that the best way to tackle this is to transform NYSC into a job creation programme like N-Power.

For them, rather than send engineering graduates to teach English in primary schools, corps members can use the time to learn skills for entrepreneurship or boost their CVs with relevant work experience. NYSC already does this to some extent through the vocational training of the Skills Acquisition and Entrepreneurship Development (SAED) that commenced in 2012.

Someone had argued that such a shift in NYSC’s focus would be a mistake for several reasons. First, job creation programmes have a patchy record with tackling unemployment when labour demand is low. Secondly, the skills taught through SAED do not add much value to a university degree, which seems inappropriate given the program’s demographic.

But most importantly, pivoting to job creation detracts from the purpose of NYSC; “serving your country”. Although it would be nice if individual corps members did get some useful job experience in the process, which should not be the primary objective. These sentiments are inaccurate because empowerment of the youths through skills is something that would last for a lifetime.

How can we reform NYSC? By doubling down on what it gets right. Despite its flaws, NYSC is critical in the health and education sectors. The NYSC Health Initiative for Rural Dwellers has benefited thousands of Nigerians, many of whom would not have gotten access to proper health care without this programme. Likewise, corps members have helped plug teaching gaps in rural schools.

No wonder the prominent civil rights advocacy group; the Human Rights Writers Association of Nigeria (HURIWA) has expressed great concern about the Bill seeking discontinuation of the scheme.

HURIWA cautioned that the move might worsen the level of insecurity in the country, adding: “If you scrap NYSC, what are you going to do with these young graduates who have come out from the university with nothing to do? “Don’t you think that it will heighten the insecurity situation in the country? Don’t you think that it will make our youths be very despondent and then begin to fight the government?”

On the issue that corps members are now being posted to their geopolitical zones, HURIWA opined that there is nowhere in the NYSC Act that people should not be posted within their geo-political zones.

“Specifically, Section 1, Subsection 4 D of the NYSC Act, states that corps members should be posted to states other than their own and in given them assignments, they should make sure that people from different sections of Nigeria are within that place”.

Indeed, the National Youth Service Corps has no doubt proved to be so pertinent to the corporate existence of the nation. The general consensus among Nigerians has been a suggestion for several reforms that should be carried out to reposition the Scheme in line with contemporary realities so that its impact will be more. It is also to be noted that any investment and whatever the energy exerted to reposition the NYSC must be seen as judicious and patriotic.

The prospect of NYSC is quite reassuring as beyond national unity, several enduring people-oriented Community Development Service projects executed by Corps members dot the landscape, nooks and crannies of the country and more are unfolding through the creative initiative and ingenuity of youth Corps members as part of their patriotic contributions to national development. Therefore, eliminating NYSC wouldn’t make the government more responsive in the short term, and many communities would be made far worse off than before.

Finally, for NYSC to succeed, corps member safety has to be taken seriously. This is especially true because the national service scheme by design separates corps members from the safety nets that Nigerians have to come to rely on; their families and communities.

Since corps members are considered ‘government pikin’, we should expect that the safety of corps members be given particular priority. This writer is aware of the efforts made by Brigadier General Shuaibu Ibrahim led the management of NYSC to partner with Army, DSS, and all relevant security agencies to give the highest consideration to the safety of corners in their areas of operation in Nigeria