By Ifeoma Ogbodo and Daruwana Daku

As Fides Newspaper winds up for the year, the cover caption, ”Nwa Mgbafor Rides to Govt House”,  with the accompanying picture written by Jude Atupulazi (Editor-in-Chief), has been declared as the best cover  tittle and picture for the year, 2021. This was announced by the Director of Fides Media, Rev Fr Dr Martin Anusi, last Monday, while rewarding Mr Atupulazi for the caption during the last editorial meeting for the year.

This is even as Mr Ikeuonna Eleke, for the third time in a row, emerged the winner of Fides Best Reporter of the Month (FiBROM) for the month of November.

Fr Anusi, speaking on the cover caption, commended the Editor-in-Chief, Mr Atupulazi, for his style in story captioning. The Director who described the ‘Nwa Mgbafor Rides to Govt House’ story that was published in the November 14-20 edition of Fides Newspaper, as captivating, added that it was the best caption for the year, 2021.

According to him, Mr Atupulazi’s choice of image for the caption enriched the story. 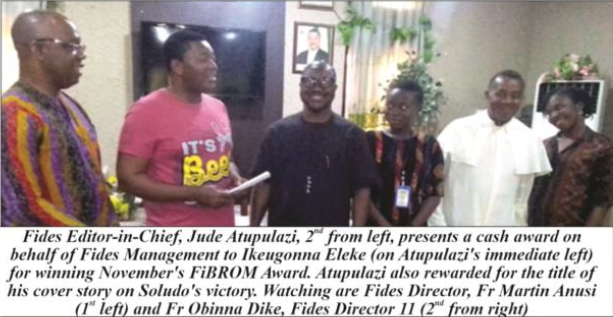 Receiving the award from the Director, Mr Atupulazi said the caption was from a moment of inspiration which he got after earlier seeing the picture of Prof Chukwuma Soludo riding a bicycle.

He thanked the Director for deeming the caption worthy of an award and pledged to continue discharging his duties to the best of his ability, noting that his passion for the job was what had kept him going.

‘My job takes priority over all else. It is something I don’t joke with. I will continue giving my best on the job as I strive for excellence in the discharge of my duties. I have great passion for the job,’ Atupulazi said, shortly after the award.

It will be recalled that; the ”Nwa Mgbafor Rides to Govt House” story was published after the victory of the All Progressives Grand Alliance, APGA, candidate, Prof. Chukwuma Soludo; former Governor of the Central Bank of Nigeria, CBN,now governor-elect of Anambra State.

Meanwhile the award winning Fides reporter, Mr Ikeugonna Eleke, won the Fides Best Reporter of the Month, FiBROM Award, for the month of November and was duly appreciated by the Director, Rev. Fr. Anusi, as well as the Editor-in-Chief, Mr Atupulazi.

The award presentation was done during the monthly meeting of the News and Editorial department at Bishop Obiefuna Auditorium, Fidesplex, Awka on December 13.

Eleke, it will be recalled, previously won the FiBROM Award of September 12-18, 2021 edition of Fides Newspaper, titled, ”Amansea, New Hell for Anambra Road Users”. He also won the October 24-30 edition, with his story on ”Anambra EndSARS Victims, an Endless Wait for Justice”.

His recent story on ”The Mkpurummiri Challenge among Anambra Youths”, in the November 28-December 4, 2021 edition, won him the latest award.

The Director appreciated the Steadfastness and consistency displayed by the Eleke in the discharge of his duties and charged young reporters to emulate those attributes; even as he encouraged the award winning reporter to sustain his good job and never relent.

The Editor-in-Chief reiterated the importance of recognizing and following up good news stories, noting that it was a core attitude portrayed by Eleke.

Mr Atupulazi who also praised Mr Eleke on his consistent awards over the months, encouraged him to never get tired of winning.

The award receipient, Mr Eleke, thanked the Director, as well as the Editor-in-Chief for finding him worthy of the award and charged his colleagues to be confident at all times and not be intimidated in any form.

He said the award-winning story was one he put up by accessing social media platforms, and urged his colleagues to do same whenever the need arose.