Ahead of the January 28, 2022 Triennial Delegate Conference of the Nigeria Union of Journalists (NUJ), Anambra State Council, the entire Fides Media has thrown its weight behind the candidature of Comrade Mmaduabuchi Onwumelu, a member of staff of the establishment who is vying for the chairmanship position at the conference, reports Ifeoma Ezenyilimba.

Speaking when he led some other Fides members of staff in a show of solidarity in support of Comrade Onwumelu’s candidature at Fides premises last Wednesday, the Chairman of Fides Staff Wccccccccelfare Association (FiSWA), Mr Alexander Johnson Adejoh, disclosed that Onwumelu had the full support of the Management and staff of Fides Media Ltd in the election.

According to him, the Fides Management had supported Onwumelu with free posters for the campaign and had also assured him of every necessary support to ensure he cruised to victory.

Mr Adejoh, who is also a member of Fides Chapel of the NUJ, described Comrade Onwumelu as the most qualified out of the three candidates vying for the position of the chairmanship of Nigeria Union of Journalist, Anambra State Council.

He noted that Onwumelu had what was needed to bring the desired positive change in NUJ, Anambra State. Pointing out that Onwumelu enjoyed the support of many other chapels of the Anambra State NUJ, Adejoh called on all the eligible voters to vote for Onwumelu whom he rated as an overwhelming favourite to win the election.

He described as unacceptable, the idea that an individual who was an active member of another union and another who was not an active journalist would be allowed to contest and head a professional body as high as NUJ. Adejoh maintained that the post of NUJ chairman ought to be occupied by an active, practicing and professional journalist.

He described Comrade Onwumelu as the most qualified person to contest and win the election among the three contestants. 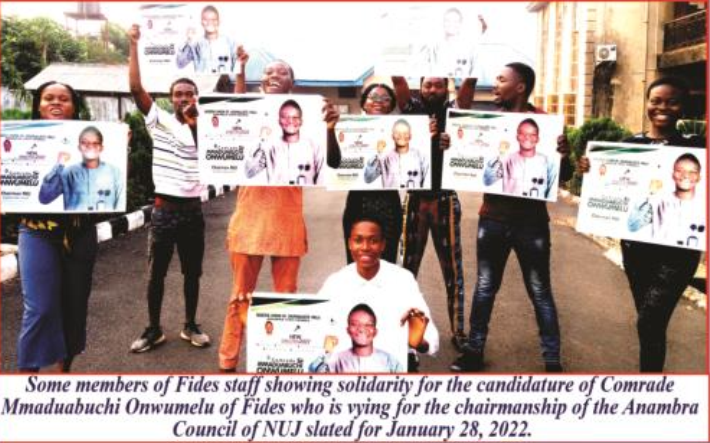 On the view in some quarters that Onwumelu was too young to vie for the chairmanship position of NUJ, Mr Adejoh insisted that leadership was not about age, but about responsibility. He regretted that Nigerians and many people in various sectors of society had been facing problems of bad leadership because old people  were afraid that the younger ones would shoot things out of proportion and thus relegated the younger people to the background and continued to dominate the scene.

The FiSWA Chairman, who likened leadership to marriage, described Onwumelu as a born leader who had distinguished himself in various leadership positions he had held in the past, and would as such be able to change things for the better for the NUJ in line with his campaign slogan of “New Direction”.

‘Leadership is like marriage. There are some old people who have made a mess of marriage and leadership positions. And there have been some young people who have succeeded both in marriage and in leadership. Age is not a factor at all. It is all about taking up responsibility successfully. Mmaduabuchi Onwumelu is a born leader who, I am certain, will bring about the most desired positive changes in NUJ Anambra State. He is a young man who knows what journalism profession is all about and the best for the position,’ Adejoh stated.

The elections come up this week on Friday, January 28.