On Friday, April 30, history was made positively in Anambra State as her first airport at Umueri witnessed the maiden landing of three aircraft on the 15-month old project. It was a development that was widely celebrated by many in the state and beyond. The celebration was for good reason, being that the state is considered the home of captains of industry and business moguls who will no doubt find the cargo airport very useful for their businesses.

The airport, which is considered among the biggest in Nigeria, has put Anambra among the league of states with an airport. 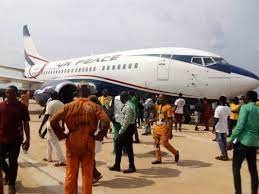 One of the three aircraft that landed on Anambra Airport, Umueri, during the test run, April 30, 2021

Although it has been argued in some quarters that the project is not of priority, being that there exist other critical infrastructure to develop and maintain, an airport will always be useful, even if on the long run; and for that, we join others in congratulating the government of Anambra State under the leadership of Chief Willie Obiano for tenaciously seeing the project through to this stage.

However, having gotten to this stage, we want to remind the governor that this is the time to focus on other critical areas that will touch the majority of the people. Such areas include housing and roads. Roads, especially, could rubbish whatever good the airport may have brought if not either refurbished or constructed.

The vast majority of roads in the state are collapsing and after the current rains that have come, will further deteriorate. The present government would be leaving more good legacies if it constructs new roads and ensures the existing ones are in other.

The government also needs to make housing another priority; such that will be affordable to low income earners. Many of the housing estates being developed now are mainly for the rich and not what the poor can afford.

Above all, the government ought to take another look at the security architecture in the state and see that the state returns to her past peaceful state. This can be achieved by funding and equipping local vigilantes as most crimes have local backgrounds.

The known and unknown gunmen all come from somewhere and can easily be flushed out from their bases which are mostly in the communities.

Whatever gains the government of the day makes will be blighted by insecurity which is fast enveloping the state now.

If the Obiano Administration can effectively address these three areas, it will no doubt etch its name in the annals of the state’s history.

In the meantime, we join others in congratulating it on the airport project.