Nollywood in the Vatican?

Sometime in the early 2000’s, I visited Oga Patty in his auto mechanic workshop along the Presidential Hotel Road in Enugu. Oga Patty was my ‘master’ in our yard at Abakpa Nike Enugu in the 1980’s. Part of my routine duty for him was running errands and ensuring that his water reservoir (drums) were filled up whenever the ‘tap is running’. You can see that I was once (and still) ‘nwa boi’.

We all began somewhere. *Do young ones still render free services to elders today?* So, this particular day of my visit to Oga Patty’s workshop, was my first time seeing in real life the legendary Chief Pete Edochie and Chief Nkem Owoh. They came to fix their cars.  When I first sighted Nkem Owoh (popularly known as Osuofia) who was legendary for his comedy, I started giggling with laughter.

For me I was expecting an ‘AY Live’ comedy to happen. But, No. He was rather furious that his car was yet to be fixed. Life in the movie is different from real life. As you watch Nigerian movies, both young and old, always separate fiction from real life.

Nollywood is a term used synonymously with Nigeria movies or cinema. Just as Americans have Hollywood and Indians, Bollywood. The name was coined in the year 2001/2002. To some commentators, it was an imitation of the American title: Hollywood. For this, it has been criticised for lacking in originality. I too have criticised the industry for lacking in thoughts and originality, giving room to repetitions and predictable endings. Movies serve not just to entertain, but also, to educate.

Nollywood dominant contents arguably seem to (be) about fetishism, criminality, ‘errotic love’, unnecessary show of unrealistic wealth and violence. This is why many have identified Nollywood as part of the agent of corruption of the Nigerian children and youth (and even vulnerable adults). This is more worrisome because there seems to be no regard to censorship, which is a proof of absence of a working censor’s board in the country.

I know the industry wants to satisfy those who ‘pay the bills’, *but let the script writers, directors, actors, actresses and indeed stakeholders in the business, know that their own children are also watching*. Beyond these identifiable negatives, however, Nollywood has offered therapeutic comic relief to Nigerians.

It has offered employment to many, and has also atimes, served as didactic agent of social criticism, value orientation and preservation of culture and indigenous languages. So, regardless of the observed negatives, Nigerians are enjoined to contribute meaningfully towards the desired improvements in the industry.

Today, Nigeria and Nigerians have become a cinema too, for good and for bad. On a good note, if you were a Nigerian and was in Rome or followed up the event of the Public Ordinary Consistory of twenty cardinals on 27th August 2022 by Pope Francis; you may be tempted to think it’s another Nollywood trending on Netflix. From the large turn out of Nigerian contingents (priests, religious, catechists, members of the laity etc), to our ‘beautiful noise’ which we create freely without apologies everywhere we go. 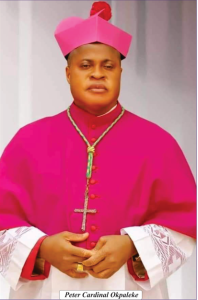 What about the presence of  known and unknown politicians and the struggle for the camera that seems to be the reason why some came; and which may make someone think it is a political opportunistic event? Anyway, the church is a mother to all, and as a wise mother, she knows those who have been with her and remains with her obediently, ‘in season and out of season’.

Our contingents’ colourful red attire made us stand out among all other pilgrims at the Vatican, to the extent that the Europeans, Americans, Asians and so on, were begging us for pictures. Infact, we stole the show. In the typical Naija expression: ‘We killed it’ or as  actor Charles Inojie will put it: “Na dem dey rush us’.

Therefore, with all the above attractions associated with this pilgrimage and accompaniment of our cardinal to the Vatican City, and it’s wide report on social media, one may be tempted to think it is a movie or a sort of picnic.  But the truth remains that not everyone understands the working of the Spirit that brought Cardinal Okpaleke and all the contingents (both those physical and those who took part spiritually) to Rome.

Do you remember the bible stories of Joseph in book of Genesis, and the choice of David the king in book of 1Samuel? The actions of the Holy Spirit are beyond human logic. Yes, the youngest diocese in Nigeria today (two year old), has a cardinal as her local ordinary. As a cardinal, though only nine years old as a bishop, he has now a special place of honour among Nigerian bishops with the rare title: His Eminence.

The colour of our customised abada is fitting for the collection of ‘Red hat’ by him whose motto is Veni Sancte Spiritus, and who was appointed a cardinal within the period of novena prayer in preparation for Pentecost 2022. In the Catholic liturgy, the red colour is the colour for votive Mass of the Holy Spirit and the Martyrs. Mindful of the implication and the demands of the new office, Peter Ebere Cardinal Okpaleke called for weeks of prayers in all parishes and families in Ekwulobia diocese.

This too explains our mission to Rome: a journey in the Spirit, a journey of faith. Thus at the end of Thanksgiving Mass on 30th August, an Indulgence was offered to those who took part in the event, having gone to confessions and said recommended prayers.

Nollywood doesn’t happen in the Vatican. In St Peter’s Basilica Rome with the Pope leading as the successor of St. Peter the Apostle (the first Pope, 32-67 AD), the event of salvation is re-enacted. The church is the Primus inter pares of all Christian families, and Pope Francis, is the 266th Pope after St Peter. It is only a beautiful coincidence that our own cardinal is Peter whose picture adorned our abada.

A beautiful image of the one who in imitation of the Suffering Servant in Isaiah 53: 7;  during his ‘Golgotha experience,’ uttered no word, and no guile was found on his lips. His voluntary resignation as bishop of Ahiara was a mark of detachment and humility. Thus the Holy Father gave him a special title of “Holy Patient One”. Since it was not Nollywood, the ending so far was unpredictable.

Today, he is among the 226 cardinals and among the 132 cardinal electors. Yet, do you know that at the dinner of 26th August organised by Ekwulobia Diocesan Priests in Europe, Cardinal Okpaleke reiterated: “Ahiara Diocese is very dear to my heart”. If it were Nollywood, your guess is as good as mine…

Have you taken part in this Grace event of our time either physically or spiritually? How have you been responding to rejections, blackmails and disappointments, either in the church or society ( in politics, business, public service etc)? Your reactions and responses during such temporal but ugly situations are tools in the hands of God, the great potter (Jeremiah 18:1-11).

Congratulations Your Eminence, Peter Ebere Cardinal Okpaleke. Your life is a ‘Scripture’, and I know God is still unveiling your biography. And since it is not a Nollywood, no one can either predict what is next or the ending.