No to Child Labour

A couple of days ago, June 12 to be precise, countries of the world marked the World Day Against Child Labour. This day was first launched in 2002 by International Labour Organization, an arm of United Nations that promotes the rights of workers and encourages decent labour conditions globally.
Its cardinal aim for setting this day aside is to bring the attention of the world to the obnoxious cases of Child Labour through local activism that could prompt governments around the world and relevant stakeholders to consciously put an end to the practice.

Child Labour is any work a child below the age of 17 years old is engaged and it is estimated that about 15 million children are engaged in Child Labour across our country. Child Labour has been found to adversely affect children’s health in different ways including the inhibition of their developments socially, physically, morally and mentally.
Experts have identified poverty, broken homes, culture, family size, greed and illiteracy as the causes of Child Labour.

Despite the fact that the Federal Government and some states in Nigeria including Anambra State have passed the Child Rights Act, cases of Child Labour and rampant abuse of children in our societies still persist because the laws are rarely enforced.

Children are still being trafficked to cities to work as house boys and girls with no negotiated and agreed wages or conditions of service. Those that were lured into such work with assurances that they would be sent to schools, often times, don’t get the promised education.
We still see kids on our busy roads and highways hawking wares. In the process, some of them are knocked down by vehicles and inflicted lifelong injuries or even killed.

As a result of such exposure, some of them fall prey to sexual predators who take undue advantage of their innocence to violate them. And because of their inexperience and naivety, some of them have been found to be unwitting agents and couriers of hard drug dealers. Out of sheer curiosity, a good number of them have succumbed to the temptation of using these substances at their tender ages, a dangerous habit which gradually debilitates and distorts their personality for life.

Children have also been found working in mines and agriculture camps where they are compelled to provide slave labour in exchange for just food, no wages.

Until very recently when COVID-19 compelled the northern states to begin to take a hard look at their religious tradition which permits child begging or almajeri, every public space in that region has been awash with children who’ve been sent out to beg for money and food which they eventually render to their teachers.

In Igbo land, it is common practice for a child to be sent to undergo apprenticeship or “Igba boy”. This is where a boy leaves his parents or guardian to learn a trade under an entrepreneur, but with an understanding that the boy would be set up in business at the end of his apprenticeship.
However, we are increasing seeing a situation where some of these entrepreneurs have trumped up flimsy excuses just to evade their agreements with these adolescent apprentices thereby leaving them in a dilemma that could lead them into crime.

Anambra State is lucky because it already has a legal instrument to wage a relentless war against the incidents of Child Labour and every form of child abuse. The first female governor in Nigeria and former governor of Anambra State, Dame Virgy Ngozi Etiaba signed the Anambra State Child Law on December 12, 2006. She is also the patron of Beecharity Outlook Foundation, a nongovernmental organization made up of young Nigerians who are dedicated to eliminating Child Labour and abuse in our country.

This group has held two major campaigns in 2018 and 2019 where they engaged in extensive road walks to major markets, sponsored public lectures and participated in radio/tv talk shows all in a bid to create public awareness on the dangers associated with Child Labour.

The Anambra State Child laws of 2006, signed by Dame Etiaba are very explicit on the issue of Child Labour and it is important that key excerpts of the laws are restated on this occasions as ignorance is not an excuse in law.

Section 31, under the prohibition of exploitative child labour state’s that “no child shall be subjected to any forced or exploitative labour”.

No child is “required, in any case, to lift, carry or move anything so heavy as to be likely to adversely affect his physical, mental spiritual, moral or social development”. No child shall be “employment as a domestic help outside his own home or family environment”. No child shall be “employed or work in an industrial undertaking…” Any person who contravenes this law commits an offence and is liable on conviction to a fine not exceeding fifty thousand naira or imprisonment.

Where an offence under this section is committed by a body corporate, any person who at the time of the commission of the offence was a proprietor, a director, general manager or other similar officer, servant or agent of the body corporate shall be deemed to have jointly and severally committed the offence and may be produced against and liable on conviction to a fine of two hundred and fifty thousand naira.

Section 33, subsection 2 of the law further states that a child shall not be used “for the purpose of begging for alms, guiding beggars, prostitution, domestic or sexual labour or for any unlawful or immoral purpose; or as a slave or for practices similar to slavery such as sale or trafficking of the child, debt bondage or serfdom and forced or compulsory labour.

No child shall be “procured or offered for any activity in the production or trafficking of illegal drugs and any other activity relating to illicit drugs as specified in the National Drug Law Enforcement Agency Law.

A person who contravenes these laws commits an offence and is liable on conviction to imprisonment for a term of ten years.

In conclusion; we have a duty to educate, protect and care for our children. That’s the only way a brighter future of our state and country can be assured.

Let’s say NO to Child Labor, and YESs to education.

COVID-19 and the Resurrection Experience 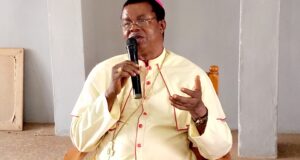 I Am Proud of you, CADEK Priests!- Bishop Okpaleke