No Tears for Fr Mbaka

In the evening of Friday, June 17, the social media became awash with news of the barring of Catholic faithful and clergy from attending the Adoration Ministry’ Emene Enugu, known as AMEN, by the Catholic Bishop of Enugu Diocese, Most Rev Calistus Onaga. The directive came on the heels of massive public outrage against Fr Ejike Mbaka’s latest faux Pas in which he once more insulted the presidential candidate of Labour Party, Mr Peter Obi, and pronounced him cursed because of what Mbaka called Obi’s stinginess.

He further said that Obi would never become president unless he came to the Adoration ground to prostrate in apology before Mbaka. To most people, that attack on Obi seemed liked one of those social media posts which ended up not being true. They doubted it because the said attack was totally unprovoked and was against a man adjudged as the most popular and loved Nigerian politician by aeons at the moment.

And given that Mbaka had previously launched such a tirade against Obi some years back when he was running as Atiku Abubakar’s vice presidential candidate, many Nigerians of different political and religious divides called on Mbaka’s bishop to sanction him, with some even going to the extent of demanding that he be de-robed.

It is also the same Mbaka that last time proclaimed President Muhammadu Buhari as a god send who would lift Nigeria from the doldrums. Because of his support for Buhari, Mbaka told Peter Obi at the altar that his journey to Aso Rock would end up in disgrace. And all this was clearly because Obi refused Mbaka’s request to openly make a donation to Mbaka’s project. Obi, as has become typical of him, maintained that he would rather make a secret donation or not at all. This irked Mbaka so much that he declared that Obi and Atiku would fail. 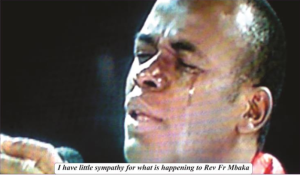 Moments later, a delegation of the All Progressives Congress, APC, led by a northerner, stepped forward and made their donation openly. Mbaka promptly hailed them and declared that they would win, thus passing a clear message that his blessings were hinged on money and the highest bidder. It was a low moment for the Catholic Church in Nigeria and Christianity in the country as a whole. Mbaka’s bishop would later prevail on him to apologize which he did not too convincingly. To prove this, he later said he apologized because he was forced, a statement that again ridiculed the highly organized Catholic Church.

That was the situation before once more he descended on Obi who is now running as the presidential candidate of Labour Party and leading a mass movement of angry, marginalized, hungry and brutalized Nigerians.

Mbaka’s latest action made many Nigerians mad and they started asking if Mbaka was above the Church. People saw Mbaka as one, who, not satisfied with enthroning the horror called Buhari, again wanted to take the country back by endorsing the same political class that had landed the country in her current mess over a young, vibrant, articulated and focused Peter Obi who even comes from an area that had the most legitimate claim to the country’s presidency, having never held the seat. The question then was whether Mbaka was actually an Igbo man or if he was working for the Fulani caliphate. It was as many people were calling for his head that reprieve came from Mbaka’s bishop.

The Bishop barred all Catholic faithful, as well as the clergy, from attending Mbaka’s activities. The letter read thus:

“In the light of the happenings in the Catholic Adoration Ministry Chaplaincy Enugu; capable of undermining the Catholic faith and teachings; and after several fraternal corrections and admonitions to Fr. Camillus Ejike Mbaka, the Chaplain of the Ministry; and after having given him pastoral directives and guidelines for the Ministry Chaplaincy, which he persistently violated; and in fulfilment of my pastoral duties as the Chief Shepherd with the obligation to promote and safeguard the Catholic faith and morals in Enugu Diocese, I hereby prohibit all Catholics (clergy, religious and lay faithful) henceforth from attending all religious and liturgical activities of the Catholic Adoration Ministry until the due canonical process initiated by the Diocese is concluded.

“I enjoin all the Christian Faithful to keep praying for Fr. Mbaka and the Catholic Diocese of Enugu as I entrust him and the Diocese to the maternal care and protection of the Blessed Virgin Mary, Queen of the Apostles.”

The development was wildly cheered on the social media, with a vast majority seeing it as something that was long overdue. The letter by the bishop came just hours after Mbaka was said to have once more apologized to Obi, an apology that cut little ice with people.

How could it have cut any ice when Mbaka failed to come out and address his people who went on a protest last Sunday and calling for the removal of the Bishop. Imagine the audacity! Because of Mbaka, a bishop has been ridiculed twice. So, what is this talk about Mbaka being let off the hook by his Bishop?

I, for one, will shed no tears for Fr Mbaka whose brand of evangelization has brought nothing but embarrassment to the Church over the years. Sometimes when I listened to his audio tapes. I wondered if what he was doing was still part of Catholic teaching.

Anyone who listens to his tirades against some past Enugu State governors will not fail to appreciate my concern. Starting with Nwodo, he even said he would die, although that did not happen. He had also attacked Jim Nwobodo, another former governor, just as he also attacked Sullivan Chime.

But perhaps the most virulent of his attacks were reserved for Chimaroke Nnamani. Abusing him with all manner of gutter language, Mbaka prophesied that Nnamani would not win his second term election bid. But he not only won it, he won his senatorial bid four years later and also went for a second term.

Any time I listened to those tapes, I wondered why the Church was still doing nothing about Mbaka who, it seemed, was working hard to smear the image of the Church. You can therefore imagine my happiness with the directive of Mbaka’s Bishop. My grouse with Mbaka is not because he attacked Obi but because of all his past attacks on other personalities, including former President Goodluck Jonathan.

He never seemed to realize how shameful his antics were becoming. Recall that after drumming support for APC and Buhari, and had gone to Abuja where he took pictures with the president, he had kept mum after the messianic picture he painted of Buhari began to fall to pieces.

The only time he was forced to speak, Aso Rock accused him of trying to blackmail them because he did not get the contracts he demanded from them. This was a time, many felt, that his diocese should have reined him in and imposed sanctions on him before he caused more harm and embarrassment. But because the action was delayed, Mbaka did it again.

Mbaka has succeeded in letting everyone know that his brand of evangelization is anchored on money. He has succeeded in making many believe that rogues will be blessed by him as long as they ”supported” his projects at AMEN.

But we all know that evangelization should never be done that way. For instance, if Obi had previously made an open donation; perhaps higher than what the APC delegation made, Mbaka would have proclaimed him as the vice president in waiting. Again, if Obi had come to his adoration ground to make a handsome donation, Mbaka would have blessed Obi’s present aspiration.

What rankles about Mbaka and his ways is that at a time when a vast majority of Nigerians have seen Obi as the only vehicle through which the country can be salvaged because of Obi’s good qualities, Mbaka is rather supporting a continuation of the old order of thievery. He has also failed to factor in the justified clamour for a president of Igbo extraction.

Being a time when the rest of Nigeria has failed the Igbos politically, with the two major parties refusing to zone the presidency to the Southeast as they did for the Yoruba Nation after the Abiola saga, one would have expected Mbaka to be happy that at least there is one serious Igbo person making waves and looking likely to even upset the status quo.

But Mbaka would have none of it. Instead, his interest is focused on the depth of the pockets of Obi and pronouncing him stingy and going nowhere just because Obi did not ”drop something”. That, certainly is not the way of the Catholic Church and the action of Mbaka’s bishop, even if a bit belated, is the right thing to do since Mbaka has consistently refused to listen to the Mother Church. Given the embarrassment he has caused the Church, I don’t think I’ll be shedding any tears for him now or any time soon.