The five-day sit-at-home directive given by a breakaway group of the Indigenous People of Biafra, IPOB, led by Simon Ekpa, has drawn the ire of the mainstream body led by its detained leader, Nnamdi Kanu, who has described the directive as stupid and coming from a discredited group. This is even as the Anambra State Government has urged the people of the state to ignore the call, reports Jude Atupulazi.

Ekpa, who is based in Finland, had in a video that went viral on the social media directed a five-day shut down in the Southeast in protest against what he called the killing of Biafran people by security personnel working for the Nigerian government of President Muhammadu Buhari and warned that those who failed to pay heed to the directive would have themselves to blame.

He had gone ahead to declare as sit-at-home days, five days this month which he gave as the 9th,10th, 11th, 12th and 14th of December, warning that anybody that would ignore the ordered would face death.

But the Anambra State Government, reacting through the Commissioner for Information, Sir Paul Nwosu, described the directive by Ekpa as wicked, mindless, retrogressive and unnecessarily punitive by enemies of the Igbo Nation and urged the people of the state to ignore it.

It said, ‘The order released by impersonators of the original IPOB leadership stated that Igbo people should sit-at-home on the 9th, 10th, 11th, 12th, 13th and 14th of December.

‘Government is calling on our people to disregard the order and go about their normal businesses and daily activities peacefully. The Christmas season is a period of joy and happiness and government will go all out to ensure that the mood is not dampened in any way. 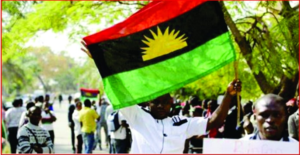 All the various arms of our security agencies are on full alert to ensure safety of life and property, as well as apprehend those who may breach the peace and tranquility of the state this season.’

The Anambra State Government said it was disturbed that a renegade and expelled member of IPOB would, from the comfort of his Finland home, continue to issue cold-blooded and murderous orders that were aimed at destabilizing Igbo Land. It described it as condemnable and an atrocious crime against ‘the enterprising and peace-loving people of Igbo Land’.

It urged the Federal Government to take steps to contain those it described as foreign agents who, it said, were bent on fomenting needless crisis in the Southeastern states.

Noting that even the authentic IPOB leadership led by Kanu had also distanced itself from the directive, the Anambra State Government described those who released the earlier statement as untrained and brainless and directed all those resident in Igbo Land to ignore the order and go about their normal businesses on those days.

‘IPOB that is concerned about our people cannot issue such a brainless and uncaring 5-days consecutive sit-at-home order to suffer our people during this critical time of the year when people are trying to make up in their businesses for the year,’ the government stated.

Speaking last Tuesday, IPOB, through its spokesman, Emma Powerful, disowned the announcement and described the order as stupid. IPOB said it did not issue such order, stating that those who declared the order were miscreants, senseless and jobless people.

The group maintained that concerned about people’s plight, it could not have issued such ‘brainless uncaring’ 5-day consecutive sit-at-home order to punish residents during such a critical time as December.

The group’s statement read in part, ‘The global family and movement of the Indigenous People of Biafra (IPOB) under the command and leadership of our great prophet and indefatigable liberator, Mazi Nnamdi Okwuchukwu Kanu, wish to state unequivocally to the people of Biafra, friends of Biafra, and lovers of Biafra freedom, that IPOB leadership did not issue any sit-at-home order on 9th, 10th, 11th, 12th, or 14th of December 2022.

‘IPOB never issued any sit-at-home order on these days mentioned above because we are not miscreants, senseless, or jobless people.

‘Every Biafran and resident in Biafra Land should ignore such order from untrained and brainless individuals whose agenda is to make Biafra agitation unattractive to our people. Every Biafran must go to their normal business on those days.

“The conception of consecutive a 5-day sit at home by a Nigerian agent and his sponsors is to show the level of wickedness and hatred they have against our people. Their agenda is to create insecurity and unnecessary hardships to make our people jettison Biafra freedom. How wicked!

‘Again, everyone has his or her rights to go and collect his or her PVC from their polling and registration centre without molestations. IPOB never boycotts elections and has nothing to do with Nigeria’s shambolic elections.’

The IPOB statement charged the people to be prepared and ready to confront ‘any fool who dares to enforce such wicked sit-at-home’. It further said that Eastern Security Network, ESN, operatives and IPOB volunteers would be out on those dates to protect the people and the markets.

‘Biafran youths should also be ready to confront anybody who comes to force them to close their businesses on these days. The idiots who are issuing this brazen sit-at-home order should know that IPOB leadership has never authorized anyone to issue an order of such magnitude in Biafra Land. Therefore, it will not work out for them.

‘Our people should go to their businesses without fear. IPOB has put the agendists and their foot soldiers in Biafra Land on check,’ the statement concluded, while noting that Biafra’s restoration was on course towards exiting from Nigeria.

While IPOB may have been washing its hands off the later actions of splinter groups, many people however believe all this was caused by IPOB when it started ordering people to sit at home, despite the advice of well meaning citizens. Those days, it warned everybody to stay indoors or be attacked, a development that led to many avoidable deaths, including that of Dr Chike Akunyili.

A resident of Awka who pleaded anonymity out of fear, said there was no way IPOB could come now to, according to him, pontificate about the ills of sitting at home when it was the group that started it all.

He described the situation now as an offshoot of earlier unreasonable actions of IPOB led by Kanu, which, he said, had today destabilized the Igbo Nation.

‘All they do now is medicine after death. They should take responsibility for all that their initial actions have brought upon us,’ he posited.

Fides gathered that Ekpa, once a disciple of Kanu, broke away at some point and claimed leadership of IPOB. He has been inciting violence against his own Igbo people from the safety of his abode in Finland and not a few people have wondered why the Nigerian Government has not commenced moves to extradite him and bring him and make him face the wrath of the law.