No Rift between Obiano, Soludo

As speculations continue to mount as to the possibility of Anambra governor-elect, Prof Chukwuma Soludo, falling out with the outgoing Governor, Willie Obiano, Fides can authoritatively reveal that there is nothing of such. This comes as the Anambra State Government, Wednesday, held a valedictory event for the outgoing governor of the state, ahead of the end of his tenure on March 17, Jude Atupulazi and Ikeugonna Eleke report.

Last Wednesday at the commissioning of the International Conference Centre by Gov Obiano in Awka, Prof Soludo was conspicuous by his absence, further fueling the rumours that the two may have fallen out.

But a stakeholder of the All Progressives Grand Alliance, APGA, and former lawmaker, Hon Pauly Onyeka, who spoke with Fides on the phone, has debunked such rumours, wondering why anyone would be insinuating a fall out when only the previous day, Soludo was at a function at Nnamdi Azikiwe University, together with Gov Obiano.

He said, ‘Which rift? I do not know of any except as it has always been on the imaginary pool of some journalists in the state. Remember that while the commissioning of the International Conference Centre took place on the 9th of March, the governor-elect and his Vision 2070 team were busy with last minute touches before submitting their report to Obiano the following day. 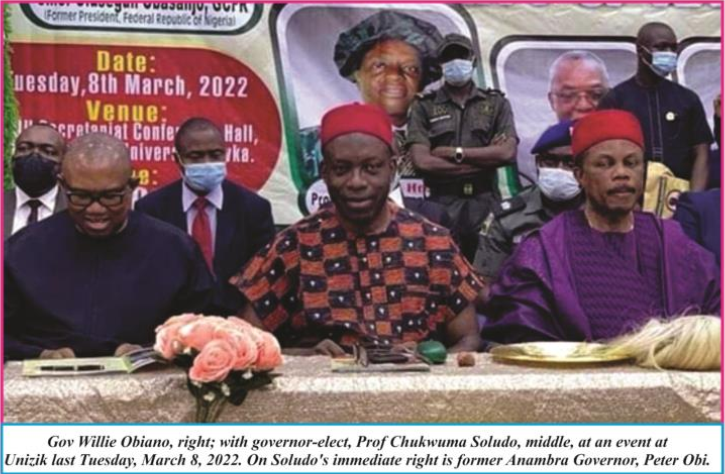 The governor-elect does not need such distraction as both his physical, mental energy are directed to ensuring a better life for Ndi Anambra by turning Anambra to a one state, smart- mega city where everyone will live, work, invest, learn and enjoy.

I sincerely believe that what our journalists ought to be pre-occupying themselves with now in our dear state, as some of us are already doing, is to educate our people on the realities of the new political/governance culture to be enthroned from 17th of March 2022.

‘The new culture, or, if you like, new normal, will automatically abhor indiscriminate disposal of refuse, building on water channels, diversion of revenue due to government, thuggery, lateness/absenteeism by civil servants and political appointees e.t.c. Please, let all hands be on deck as to see to the success of the incoming government.

He insisted there was no issue of falling out, arguing that not being present at the commissioning of the International Conference Centre was no indication of a rift.

Meanwhile, prominent individuals who gathered at the International Conference Centre, Awka, took time to praise Obiano over what they termed his glowing achievements in the last eight years in the state.

The event also featured award presentations, unveiling of a biography on the governor and the official inauguration of the 13,000-seater International  Conference Centre, Awka.

Fides gathered that the reason for the event was the insistence of the governor-elect, Prof. Chukwuma Soludo, to hold a low-key swearing in ceremony, as he would spend eight hours working at the Okpoko Slum, near Onitsha, on March 17, after his swearing in.

During the valedictory event, a book written by investment banker, Ike Chioke, with the title, ”Akpokuedike, Duty Call in Anambra”, was also unveiled.

Chioke who spoke at the event said, ‘I set out to write this book to immortalize Chief Willie Obiano and his performance in the eight years that he served as governor.

‘I met him in 2004 during the banking sector consolidation when the governor-elect was the Governor of Central Bank of Nigeria, and Chief Obiano was the Executive Director of Fidelity Bank, and as an investment banker, I was to work with the bank in the acquisition of another bank.

‘Since then, we had been close and later I was to work with him when he became governor and later he appointed me as the Managing Director of Anambra State Investment Promotion and Protection Agency (ANSIPPA) where I serve today.

‘This book is my attempt to document the achievements of the governor for posterity. He is a man who has a strong conviction about what he wanted to achieve in Anambra and he came to power fully prepared for the task and is today leaving the state with a lot of legacy projects.’

The former Commonwealth Secretary General, Chief Emeka Anyaoku and the Obi of Onitsha, Igwe Alfred Achebe, were among dignitaries who eulogized the governor for his achievements in the last eight years.

Meanwhile, Governor Obiano used the opportunity of the event to bestow awards on deserving sons and daughters of the state.

The governor said, ‘By the powers conferred on me as the Governor of Anambra State, in the Anambra State Honours Laws of 1995, I want to award some deserving personalities in the state.

‘This is an authentic award and we will be awarding recipients in categories, including Commanders, grand commanders and merit award. You must feel free to affix it to your name anywhere in the world as it is very recognized.’