No Rift between Me and Obi – Soludo

Anambra Governor, Prof Chukwuma Soludo, has said that reports alleging a rift between him and Peter Obi, the presidential candidate of Labour Party (LP), are mischievous. Obi is a former governor of Anambra State, reports Mmaduabuchi Onwumelu.

Soludo, who had in an article titled: ‘History beckons and I will not be silent,’ dismissed the chances of the Labour Party standard bearer in the 2023 presidential poll, said he would soon be meeting with Obi to iron out their rift, which, he said, was essentially political.

It was the occasion of the 70th birthday celebration of the Catholic bishop of Awka, Most Rev Dr Paulinus Ezeokafor, at St Patrick’s Cathedral, Awka. It afforded the two prominent sons of Anambra an opportunity to meet for the first time since the altercation between them in the wake of Soludo’s letter and the reactions of Obi’s supporters. 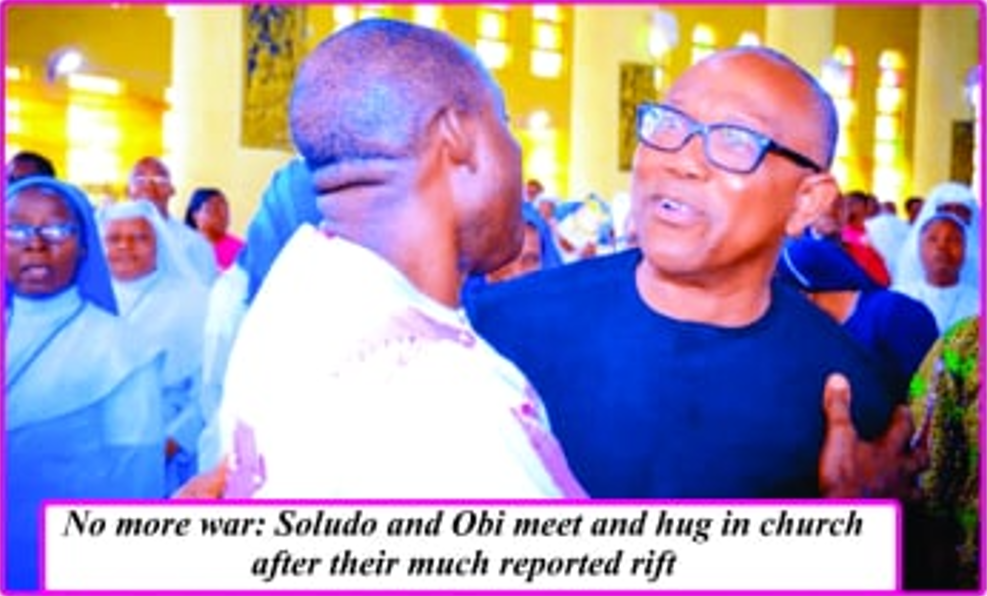 Soludo had walked up to Obi where he was seated and greeted him, with both men embracing to the obvious delight of the congregation. Soludo said later that he had no issues with Obi except that he disagreed with him in politics.

Meanwhile, Soludo said he owed his prudence and humility to the Catholic Bishop of Awka Diocese, Most Reverend Ezeokafor, noting that Ezeokafor had been of great influence on him and his government, especially in the area of prudence and patronage of locally made products.

He spoke during a thanksgiving Mass organized in honour of Bishop Ezeokafor in celebration of his 70th birthday on Thursday, November 24, at St Patrick’s Cathedral and appreciated God for sparing the celebrant’s life to attain 70.

His words, ‘You changed my thinking when you visited my village house in 2019 and rejected the foreign wine offered to you in the place of palm wine. Today in the Governor’s lodge, the highest wine served there is palm wine.

‘I was also humbled by the moderate type of car you drove to my house. You told me you chose not to go with a vehicle far above the average of those you’re pastoring. I think this is exemplary.

‘When you see me drive Innoson cars, that’s part of the inspiration I got from you. If not for security, I would have been riding bicycles to work.

‘We’re taking the prudence you taught us to the next level because when we came in, it cost us over N137m to clean offices. Now, it cost barely N11 million. I can only promise to take the message to the world,’ he said.

He also debunked claims of being paid $28 million to run down the Labour Party presidential candidate.

‘Today is very special. When we came into the service, it was the first time my brother, Peter Obi, and I are meeting in a public event and in a Catholic Church which two of us belong to. I think it was divine.

‘When I came in, I quickly went to where he sat and hugged him. People watched with bewilderment as if we’re acting a drama. Is it not the same people quarrelling?

‘Let me tell you; we spoke two times just last night. We’re brothers. You know I’m not one of those politicians that speak from two sides of the mouth. I can’t pretend. I’m a politician, but also want to make heaven. I’ll keep saying the truth.

‘There’s no rift between Obi and I at a personal level. Nobody snatched each other’s wife. What appears to be the rift between us are fundamental political differences. Nothing else.

‘So, for those forging blackmail and all that, including the one they said I collected bribe to say what I said, I ask them to bring it so I use it to construct roads. If Soludo is into bribery, I would have been a multi trillionaire.

‘On the fundamental differences we have, we are going to meet in the next few weeks. We’ve agreed to discuss and iron out our differences. Unfortunately, he’s left. We must get it done. Anambra is for all of us,’ he concluded.