With effect from last Friday, July 1, public parks owned by the government will now be directly managed by government, with caretaker committee members in Anambra markets now forbidden from collecting revenue on behalf of the Anambra State Government, reports Jude Atupulazi.

This comes as the government of Anambra State commences the implementation of a new tax and levy regime in Anambra markets and roads which will now be the sole responsibility of the Anambra State Internal Revenue Service, following the digitizing of the revenue collection process in the state.

In the statement, Governor Soludo warned anyone posing as a government revenue collector in any part of the state to desist forthwith or face the full wrath of the law, as his administration was making frantic efforts to stop leakages of government revenue which usually ended up in private pockets.

Governor Soludo said Anambra was an alpha state and expressed optimism that in line with his campaign promises, the state would be peaceful, livable and prosperous.

The governor emphasized that Anambra should ideally be a reference point in all ramifications as one of the developed states within the federation; even as he further pointed out that the new tax regime had become imperative as the era of revenue generation through the sale of  crude oil was gradually phasing out.

He revealed that since February this year, no remittance had been done from the NNPC into the federation account as money accruable from the sale of crude oil was gradually dwindling.

The governor stressed however that henceforth, public parks owned by the government would be directly managed by government, and directed that caretaker committee members in Anambra markets were now forbidden from collecting revenue on behalf of government.

The governor pleaded with those who would be affected by the new system to consider the larger picture of making Anambra succeed for the greater good of the people, just as he however quickly offered to provide alternatives for them.

Governor Soludo called on  different unions to mobilize their members for action, stating that his administration would not hesitate to enforce the new directive for the general well-being of the state’s economy.

The Commissioner for Transportation, Barrister Pat Igwebuike, who also addressed the gathering, said Governor Soludo was committed to the cause of road transporters. She asked them to join hands with the Soludo Government to salvage what she described as the already battered system, which, she said, had gross adverse effects on the state’s economy. She called on the members of the union who had not acquired their identification to do so as quickly as possible

The Commissioner for Homeland Affairs, Chief Chikodi Anarah, said Anambra used to be the pride of place for business operators every day of the week, but decried the low turnout and patronage which had characterized Mondays due to the Sit-at-home syndrome. He said the development was making business owners to relocate their businesses to neighbouring states. 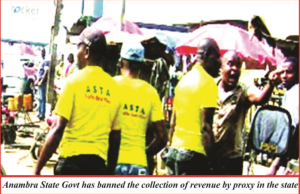 The chairman of Anambra State Internal Revenue Service, Mr. Richard Madiebo, explained that the present administration had designed the revenue framework in such a way that people could now pay their taxes and levies seamlessly, as well as eliminate multiple taxation.

Mr. Madiebo further said that all taxes and levies payers in the state would be issued with a digital Identification and disclosed that commercial vehicle operators who made daily payments would not be charged to pay anymore in any public park, adding that five percent of the revenue generated by any union, would be given to them to manage the respective business places.

The Speaker of the State House of Assembly, Rt. Hon. Uche Okafor; Deputy Speaker, Rt. Hon. Paschal Agbodike; Secretary to the State Government, Professor Solo Chukwulobelu; Chief of Staff to the Governor, Mr. Ernest Ezeajughi, and an array of market leaders attended the function which featured a question, answer and contribution session.

Earlier, in a post-exco briefing, the Anambra State Commissioner for Information, Sir Paul Nwosu, said in a bid to tighten loopholes of leakages in the revenue windows of the state, the Government of Anambra State has banned the collection of revenues by ministries, departments and agencies.

He said such function would now be the sole responsibility of the Anambra State Internal Revenue Service, following the digitizing of the revenue collection process in the state.

Commissioner Nwosu further revealed that plans were underway to centralize the data of all the MDAs with the State’s Information Communication Technology Agency, to avoid a situation where ICT vendors who worked for different MDAs in the past, held government to ransom at the expiration of their contract by holding on to valuable data.

Sir Nwosu added that the Anambra State ICTA would now be charged with the responsibility to holistically consolidate and manage the data of all the MDAs in Anambra State, stressing that ANSEC discussed and approved the need for a baseline data pool.

He maintained that to achieve this, each ministry was required to own and be able to provide baseline data on itself and the MDAs under it, as government’s decisions would be evidence-based and data driven henceforth.

The commissioner stated that also at the ANSEC Meeting, an elaborate presentation was made by the Commissioner for Commerce and Industry, Dr Obinna Ngonadi, on enhancing the Igbo Apprenticeship Scheme or “Igba Boi”, a scheme that was peculiar to Ndigbo and had over the years been a unique venture capital raising model, studied in business schools around the world, which, he said, was unfortunately under threat.

He pointed out that government was critically looking at all manner of variables to sustain and reinvigorate the unique business model, consequent upon which it set up an ANSEC Committee to come up with ways to enhance the apprenticeship scheme so that an enduring policy could be formulated on “Igba Boi”.

In another development, Commissioner Nwosu concluded that ANSEC received a report on the case of a woman of 75 years who was viciously raped to the point of coma in Awkuzu.

The Commissioner said that the man who committed the crime revealed that his native doctor told him that raping such an old woman would make him rich. The young man has since been arrested and the police are on the trail of the native doctor whose shrine will eventually be destroyed.