No Going Back on Touting Ban – Soludo

The Governor of Anambra State, Prof Chukwuma Soludo, has no intention of going back on his government’s ban on touting in the state.

The governor made this known while receiving members of the Anambra State Tricycle Union at Government House, Awka, Wednesday, during a peaceful protest staged by members of the tricycle or Keke union, reports Isdore Ndubuisi

Soludo who was represented by the Secretary to the State Government, Prof. Solo Chukwulobelu, and the Special Adviser to the Governor on Security, AVM Ben Chiobi, reaffirmed his stance on the ban to the union which complained about the continued extortion and brutalization of its members by those intent on flouting the governor’s ban. 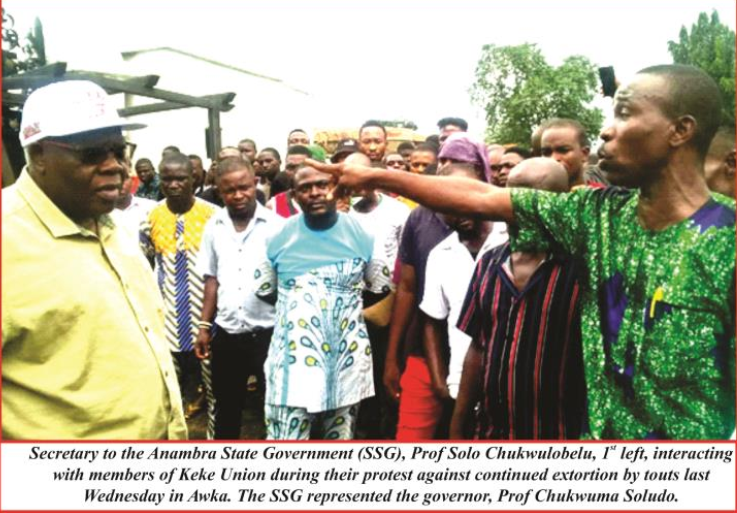 It will be recalled that since after the ban was pronounced, touts in various parts of the state had remained recalcitrant and had been beating up those who dared to challenge them, with the latest being the attack on a human rights crusader, Comrade Osita Obi, last wednesday in Awka, after which he was rushed to the hospital.

But the Anambra State Government has remained resolute about fully implementing the ban.

Addressing the protesters at Government House, Awka, Soludo said, ‘Any form of touting in the state remains banned and I want you to give me the names and take pictures of those involved and we will pick them up for prosecution.

It is not true that the government gave them one month’s leave as alleged. I repeat, touting is banned forever in Anambra State.’

Soludo also commended the union led by the Zonal Chairman, Anambra Central Tricycle Union, Comrade Ikeyinna Ijeokwukwe, for their initiative to protest in a lawful manner, without jeopardizing the peace of commuters and the public. He however warned keke operators against what he called unwholesome driving in the state.

‘I appreciate you for your initiative in coming to make your voice to be heard in a peaceful manner. We have the understanding that some people are illegally collecting revenue. I want to assure you that we already have a plan for enforcement and that revenue collection would be technologically driven.

We are working to see that nobody collects cash from anybody. Let me also use this opportunity to warn everybody to desist from unwholesome driving in the state,’ said the governor.

Fides visited Chukwuemeka Odumegwu Ojukwu University Teaching Hospital (COOUTH) where the member of the union, Comrade Osita Obi, was hospitalized after being attacked by touts led by a suspected cultist and leader of the illegal revenue collectors, in the early hours of Wednesday morning. 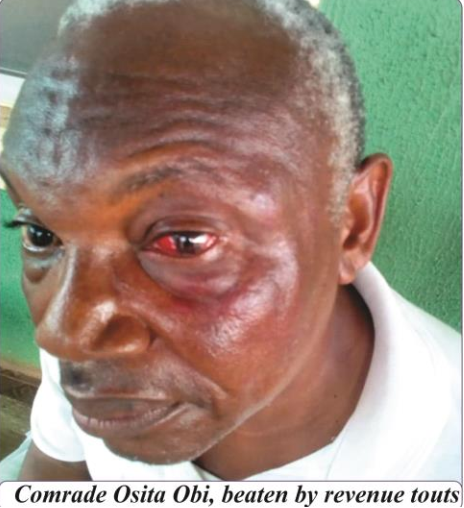 Comrade Obi who recounted his experience via a telephone conversation after unsuccessful attempts to speak to him at the Intensive Care Unit of the teaching hospital, said, ‘We were at Ekwueme Square where the Keke drivers converged to go and thank the governor for asking the touts, criminals and cultists, to leave the state; that Agbero (touts), would not be tolerated.

‘So about 500 keke drivers wanted to go there. I was there to address them as the Coordinator, Anambra State Keke Drivers Forum. But I was attacked by one Collins Ozojiofor, popularly known as Snoop.

‘He led eleven men to attack me. They smashed the windscreen of my Tricycle and I lost my phone and one hundred and eighty thousand naira meant for mobilization in the process. I was then rushed to the teaching hospital at Amaku,’ Comrade Obi said.

Reacting to the incident, the Zonal Chairman of the Union, Comrade Ijeokwukwe, pleaded with the governor to mobilize an enforcement team that would help sustain his directive on touting in the state.

‘After Prof. Soludo’s declaration of no touting in the state during his inauguration ceremony, they stopped. But suddenly on the 17th of April, they resumed collection and alleged that the governor gave them a month’s leave. Since then, they have inflicted bodily injuries on our members and that is why we have come to inform the governor that forceful illegal revenue collection has continued.

‘Since we started operations, we never said we weren’t going to pay, but the problem is the collection of Internally Generated Revenue (IGR) by agents which snowballed into touting. We leant that the governor wants IGR to be digitalized and we are in support of it,’ the zonal chairman said.

In a related development, the Deputy Governor, Dr. Onyedikachukwu Ibezim, who incidentally witnessed the presence of the crowd on his way to an official assignment, stopped over and inquired reasons for the agitation and was briefed by the zonal chairman of the Union.

Dr. Ibezim said, ‘I want to thank you all on behalf of the governor for giving us the mandate to serve you. I am so overwhelmed that your protest was peaceful without taking the law into your hands, and that is the way to go. Your comportment prompted me to pull over and ask what was going on. As for touting in the state, the governor has put a total stop on any form of touting in Anambra State because he is poised on creating a conducive environment for Anambrarians, as well as visitors.’

Also, a former security member in the Office of the Presidency on Anti-Corruption War against Multiple Taxation, and former Commander of the Anambra State Vigilante, Mr. Ifeanyi Anagor, popularly known as Bazooka, also spoke to Fides on the resumption of the illegal collection of revenue by touts.

He said, ‘Today, the Tricycle Union decided to go and see the governor to confirm if he gave orders to the touts to resume collection, but while we were concluding arrangements, we got a call that touts and keke drivers where fighting. Because I am from Awka South, I had to come and find out what happened,’ Anagor said.

Meanwhile, the Secretary, Owerri Road Branch of the union, Victor Asomugha and Emeka Nwude, from Dunukofia Branch, both confirmed that touting had resumed in the state. They berated the continued operation of touts, using cult groups to attack their members, and cited instances where keke riders were severely beaten for refusing to pay. However, they applauded the government for maintaining its position on no touting in the state.

Fides recalls that the Tricycle Owners Operators Association of Nigeria (TOOAN) was banned by the former administration of Governor Willie Obiano.