The Catholic Bishop of Awka Diocese, His Lordship Most Reverend Paulinus Ezeokafor, Says that Nigeria will still come good despite the myriads of problems bedeviling the nation, Ifeoma Ezenyilimba Mmaduaburochukwu Onwumelu report.

Bishop Ezeokafor who stated this at St. Patrick’s Catholic Cathedral, Awka, expressed the hope that with continued prayers and quality leadership, things would be changed for good, even as he quoted the late Prof Chinua Achebe, who described Nigeria’s problem as a problem of leadership.

His words, ‘I believe in one Nigeria where everyone will live in peace and harmony. I want a country all will be treated equally and democracy dividends evenly shared. I believe in one Nigeria, but not at all costs. In all, we still have to thank God for our country, Nigeria. Attaining 61 years as a nation calls for thanksgiving. 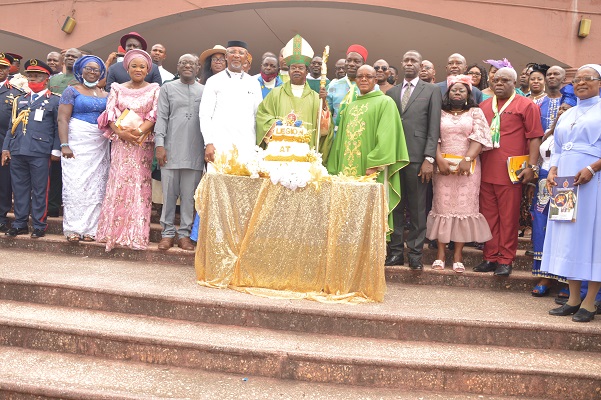 The charismatic and influential prelate said that bad leadership had subjected the masses into abject penury, beggars and state of hopelessness, conceding, however, that the nation could still be remedied if adequate leadership would be put in place.

The outspoken cleric accused the Federal Government of Nigeria of insensitivity to the plights of those they led, noting that the insensitivity of the leaders had gotten to the level everyone should speak out.

‘This is the time we all need to pour out our minds. Things are not being done right at all. The level of hardship in this country is indescribable. Leadership ineptitude has turned all of us into wailers. People are suffering on daily basis. I will continue to talk. If they do well, my talk will reduce. Nigeria is for all of us. No one should play god or believe that others are second and third class citizens,’ he said.

The chief shepherd of the Catholic Diocese of Awka expressed dismay with what he described as veiled Islamization agenda going on in the country, stating that anyone who was still doubting the ‘glaring truth’ still lived in a fool’s paradise.

‘A programme of Islamization of Nigeria is ongoing. There is no gainsaying the fact. Nigeria is a secular state and we have two major religions in this country; Christianity and Islam. The two religions and others should be allowed to be. Any attempt to force a particular religion on the people will be resisted by Nigerians,’ he stated. 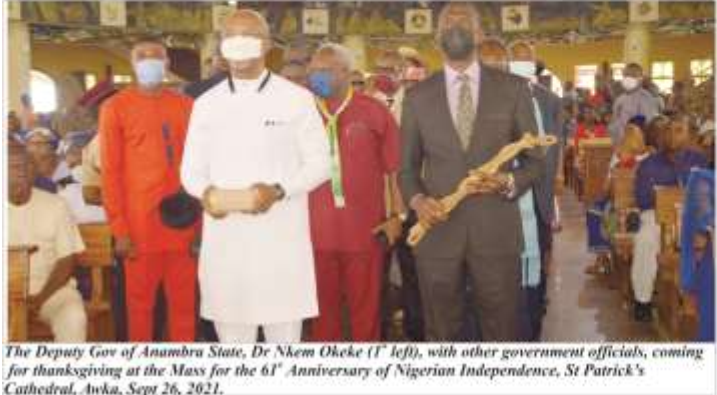 The Bishop said the Federal Government’s borrowing spree was pure enslavement, warning that it had gotten to an alarming proportion; even as he said they were obviously mortgaging the future of the poor masses, especially the future of the children yet unborn.

On the Anambra election, the Local Ordinary expressed serious concern over what he described as unbelievable desperation of some politicians, noting that there were those who did not have any business contesting the election, but were there to play a spoiler’s role, as well as to cause confusion and division.

Bishop Ezeokafor appealed to Ndi Anambra to vote according to their conscience, noting that any bad government enthroned during the November 6 gubernatorial election would hurt Ndi Anambra for the next four years.

‘Collecting money to vote for a bad candidate is a recipe for disaster and anarchy. Do not mortgage your future by voting in the wrong person. Vote because you love Anambra State. Vote someone who is capable,’ he pleaded.

Speaking on the occasion, the Anambra State Deputy Governor, Dr Nkem Okeke, said the 61st Independence Anniversary of Nigeria was a time for retrospect.

Dr Okeke, who represented the Executive Governor of the state, Dr Willie Obiano, KCSG, described leadership as the highest challenge which Nigeria had.

.Insisting that every individual deserved something better, the deputy governor noted that there was need for leadership with sincerity that would make things better. Dr Okeke, who said he wondered where the country was heading to expressed his worries for the children of the nation.

He expressed his regret that some church leaders according to him, worsen the situation by getting so much involved in politics. Dr Okeke, charged all to do what was right in every opportunity they found themselves.

Baring his mind on the November 2021 Governorship Election, Dr Nkem Okeke, charged all to according to their conscience vote in that person who, he said, would make their lives and the state better. The deputy governor, advised all against vote buying in any form.