Today, I bring you a piece written by my dear friend, Dele Momodu. He tries to analyse the arrests of IPOB leader, Nnamdi Kalu and Chief Sunday Ighogho within the time frame of one week. They are both seen as threats to the federal government. Unfortunately, Ighogho somehow disappeared and wasn’t caught, but his family members were arrested and some shot dead. What a country! It makes interesting reading. He called it Nigeria’s Week of James Bond Movies! Please, enjoy it…

It is to these two maverick gentlemen, Nnamdi Kanu and Sunday Igboho, that I wish to turn this weekend. The unpalatable events of the past week surrounding them portend even greater danger for our continued existence as a nation than the agitation for separate nationhood which it is claimed they are fomenting. 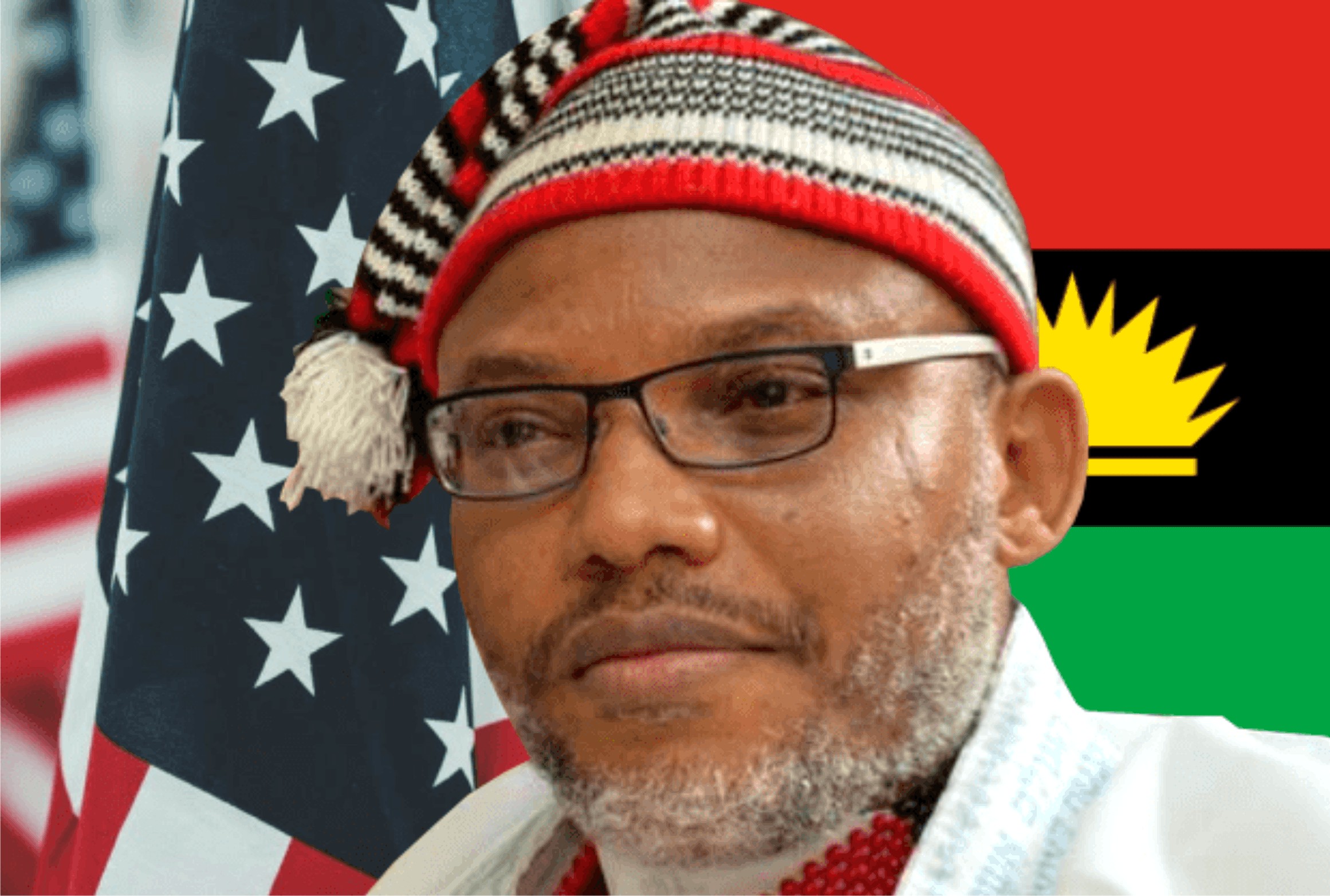 Kanu’s case is much more complicated. He was visiting Nigeria on holiday, only to have that holiday turned into a nightmare by supervening events. He had been arrested, charged for treason, amongst other offences, by the Nigerian government, granted bail by the Court and then vamoosed into thin air following a violent, calamitous and fatal raid on his ancestral family home in his village.

Since then, he’s been a most wanted man by the omnipotent Nigerian administration of President Buhari. But in fairness to him, he didn’t have many options. The gestapo fashion in which his premises was invaded must have been responsible for his sudden disappearance. Who wouldn’t disappear in the face of such violent assault knowing that your Government did not merely want to kill you, it wanted you very dead!

After a while, when nobody new whether Kanu was dead or alive, he suddenly resurfaced in the holy city of Jerusalem. His iconic stature grew even more, and his martyrdom seemed assured even though he was still alive. His regular broadcasts became more strident and impassioned, and it was not too long before my avid followers started demanding that I interview this irrepressible irridentist.

I obliged and had a powerful Instagram live interview session with him last year. However, I never bothered to ask where he was speaking from. It was sincerely speaking not my business. What was important is that he sounded brilliant and very passionate about the Biafra project. We disagreed vehemently on a few points, especially his obsession with the theory that there’s a fake Buhari in the Presidential villa. On this point, I stood my ground solidly. Even if nothing was impossible in Nigeria, not this tale by the moonlight.

I had also asked him how he hoped to get a Biafra nation without another civil war. His response was brilliant. He said a referendum would settle that. On this, I appreciated the fact that he was not irredeemably pinning his hopes and strategies on fighting a war.

But I made it clear to him that a referendum was dead on arrival because those who are currently profiting from the ongoing madness in Nigeria won’t go away without a fight! I am not wholly convinced about the demand for Nigeria to be split into different nations because all I can see is a fragmentation and balkanisation of the country which may not augur well for any part of the country, in the long run.

Besides, I reiterated that I cannot see how the various separatist Republics and independent countries being advocated can come into being without great bloodshed. Which begs the question at what cost, nationhood?

Back to Nnamdi Kanu and his recent travails. I must admit that wherever he lived in the last few years, I didn’t expect him to ever venture out of his hiding place, or if he did that he would venture far afield into unknown territories, no matter the inducement.

To me that is a great act of folly. A sacrilege! Others before him have tried the same antics and, much to their chagrin and dismay, have felt the full might and weight of Nigeria and its collaborators. Salacious tales of his recent travels to Kenya are flying everywhere. And the truth is, I don’t even know what to believe any more. But the latest reports I read confirmed that he was first arrested in Kenya before the authorities there transferred him to the Nigerian authorities.

His mission in Kenya has not been disclosed yet. The big news is that he was captured, tortured, according to a report, and repatriated to Nigeria even though he wasn’t carrying a Nigerian passport at the time of his arrest. Let’s also skip the issue of diplomatic row between Nigeria and the United Kingdom. What’s remarkable for me is that our security guys actually have such aptitude and efficiency and could carry out such a daring mission with the utmost secrecy that was needed.

Congratulations. Whether this kind of mission was necessary in the overall scheme of things, or whether such daredevilry, imagination and initiative cannot be better deployed to the extant threat to our unity and survival at home is a matter for another day.

For today’s purpose I will end by saying that all reasonable men and women who abide by our democratic mores and constitutionalism will condemn the way Kanu was surreptitiously arrested and brought back to Nigeria without following due process, the rule of law and the constitution. It smirks too much of totalitarianism and we fancifully believed that we had left that era behind.

We are being forcibly reminded that this is not the case, and we must be wary and afraid. I fear there is an endgame which only the discerning are beginning to see.

Next. Predictably, everyone knew once Kanu has been captured and chained down, the next target would be Chief Sunday Igboho Adeyemo. And pronto, his house was invaded by government forces in similar fashion to the invasion of Kanu’s family home about four years ago, in September 2017. This time they were led by the DSS. As with the invasion of Kanu’s home, there was no attempt at any civility or following the law or indeed the rule of law.

There was merely a crude, thuggish demonstration of force and arbitrary and naked abuse of power by the government. A government that was using forces sworn to protect the citizenry from precisely the kind of brigandage and assault that they carried out a few days ago at Igboho’s home. At the end of the operation, they left plenty sorrow, tears and blood, apologies to Fela Anikulapo Kuti.

Human beings died. We are yet to be told the exact number, but it seems there were more than two people killed by the ruthless, bloodthirsty government agents, contrary to what the DSS would have us believe. Even one death is too much anyway. This has obviously become the new normal here.

In similar fashion to the Nnamdi Kanu debacle, Sunday Igboho literally disappeared before the very eyes of those sent to capture him. His whereabouts now remain unknown. In true Nollywood and Professor Peller magical style, he entered one of the rooms in his house and “mysteriously” disappeared causing much astonishment and confusion in the ranks of those sent to abduct him and convey him back to Abuja.

It seems having lost their prey, they scurried out of the Ibadan with kidnapped family members and some aides and headed in the direction of Ekiti State, where they made a stopover. To refuel, refresh or report to someone, nobody is sure.

Again, I had interviewed Igboho, via Instagram. The Igboho that I spoke to was never interested in fighting a war. He was only working at stopping the foreign invaders (as confirmed by our President) and their local collaborators who had gone on rampage in certain Yoruba townships. I did not see or hear a man who was desperately trying to bring down his nation or destroy its unity or national fabric.

I consider Sunday Igboho a patriot and nationalist who out of deep frustration has rebelled and now an agitator for Yoruba nation. In his own way, and for those that he represents, he is a freedom fighter and must not be cowed or silenced. Our Constitution gives him a right to freely express himself and his views need not tally with those of the present administration. That is the beauty of democracy.

It is for this and other reasons that the dastardly, reprehensible attack on Sunday Igboho’s home must be condemned by all right-thinking Nigerians. Civilised Governments do not act in this way. Democratic administrations must remain accountable to their citizens and cannot be seen to be ridiculing and flagrantly disobeying the laws that they are meant to protect and enforce.

How can any government be proud of the activities of the DSS in attacking and assaulting the Igboho home and its occupants, and even killing innocent and unsuspecting citizens? What did Igboho do to entail the government declaring this cowardly war on this peaceful individual who is merely keeping to the saying that a(n) (English)man’s home is his castle?

All Igboho has ever done is to come out vociferously to say and demand that those who would wish to violate and desecrate the land of his people would never succeed whilst he is around and that his people and himself would use all means at their disposal to repel any assault or attack against his people.

There is absolutely nothing wrong in that, especially where the government has failed to offer necessary protection to the innocent populace and has, as it now seems apparent, taken sides with the marauders and bandits.

No government should pride itself in having to resort to or engage in criminal conduct to apprehend relatively harmless citizens. Any government that does so is itself doomed to fail spectacularly, and ought to be challenged and caged. Otherwise, it will become the greatest monster of all time.

The vitriol and diatribe of the spokesperson for the DSS in seeking to justify this affront on the Nigerian people and its constitution is ample reason for us to say that this is now enough. That is what this present government is being a party to or condoning. We must not let it continue. We must speak up now or forever remain silent in the face of almighty and abysmal tyranny and oppression.

The government must purge itself of this unforgiveable sin to the Nigerian constitution and its people. Those directly responsible must be identified and brought to book.. They must be charged with murder and treasonable felony because they dared to hijack the apparatus of State to perpetrate, achieve and actualise their nefarious ends.

They have defamed the Federal Government and caused it to become the object of resentment and opprobrium. The Government must come hard on them so that it is not tarnished further. Nigeria would have saved a lot on insecurity had our stormtroopers had deployed their energies and arsenal in similar fashion against the bandits and terrorists who litter our forests. Rather we have been treated to horror movies of Sheikh Gumi and some Governors begging them like penitent school kids right in front of cameras.