There were 28 athletes, boxers and swimmers and it showed then in 1966, that Nigeria has a wealth of athletic talents which with more adequate training, facilities and experience were likely to take her place among the leaders in the world of sports.

In my article, ‘The Death of Nigerian Sports And A Walk Down Memory Lane’. I wrote: “Sometime in 1983, while I was doing my Master’s degree at the University of Manitoba, Winnipeg, Canada, I received a call from a reporter for the Canadian Broadcasting Corporation. I guessed he got wind of me being the president of University of Manitoba’s International Students Organisation and a founder of the Nigerian Union of Manitoba.

He asked me if I could appear on CBC TV to discuss the phenomenal success of Nigerian athletes who had participated in the World University Games held at Edmonton, Alberta that year. I did not even know that Nigeria was represented at the games. He told me that Nigeria sent only 10 athletes and these athletes won five gold medals. I was proud but hid my ignorance. I accepted and before I appeared on the show, I made sure I knew more about what happened”.

Back to the XXII Commonwealth Games. So, after this, euphoric and hopeful success, what next? Does this signal the return of Nigerian Athletics to the world stage? There was a time when Nigeria’s sprint team/athletes were rated amongst the top/fastest five in the world. 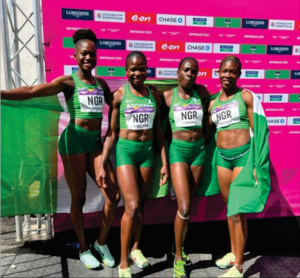 We do not seem to remember those giddy days. Corrupt, selfish mediocre officials, nepotism, and crazy sports policies (if there was ever any) were the rules of the days. Officials used the opportunities of travelling abroad to collect estacode and shop for wives and girlfriends, abandoning the athletes and even embezzling the money meant for their up-keep and allowances.

Funds for grassroot sports development were embezzled and mismanaged by officials. There was in-fighting within the sports associations with ambitious but clueless mediocre official gaining the high seats, only to mismanage the scarce funds and other resources from the sports budgets. And Nigeria sports spiralled into the abyss.

Facilities and equipment are not left out. Yearly, millions are spent on stadium maintenance, but there is nothing to show for it. The national stadium in Surulere, Lagos, was once the envy of the whole world. It was once known as the Sports City, but today it is now called a Garbage City, with the compound turned into drinking dens at night and religious activities during the day.

Again, the state of sports in the country shows how daft and unintelligent our politicians are. Sports, especially success in sports, remain one major unifying factor in this our country of diverse cultures and religions. In other Third World countries as diverse as ours, the politicians use sports to defuse unrest, to unify the cultures and religions; they use sports as a diversionary means to get the mind of the masses off their problems, and thereby able to concentrate on governing.

Take football for instance, when Nigeria is involved in major competitions, that is when you know that we are actually united and patriotic and everybody, marginalised or not, start waving the green-white-green and shouting “Up Nigeria” and not “Up Niger Delta”, “Up Biafra” or “Up Oduduwa”.

Sports could be a tool for a patriotic politician. If Nigeria wins in any sports event, we will not mind them taking the credit, although we know they have not contributed anything to such success. Corporate help is needed and companies such as Shell, Globacom, MTN, etc are already doing their best, but are given very little encouragement or support by the government. In fact, the money these corporations pour into sports in Nigeria practically end up in the pockets of corrupt civil servants in the Sports ministries and other government officials.

In Nigeria of today, despite the economic downturn, there is no reason why each local government should not have a moderate sports stadium in its area, where schools in their respective areas can hold their annual inter-house sports, and local boys and girls can display their sports talents. This is called grassroots sports.

Sports, like many other areas of governance in Nigeria, have been neglected mainly due to corrupt and inept governance. There are no incentives for budding athletes; corrupt officials embezzle money meant for sports development; the sports facilities are ill-equipped or not even equipped at all, and the facilities themselves are deteriorating and underused; sports management and administration are poor and run by ill-trained, ill-motivated officials whose only purpose is that of making money, or at worst, are happy to have a job; competent sports administrators are not given a chance to input ideas and actions to effect changes, and are always shut out of decision-making processes; and there is no longer grass-roots sports development in the primary, secondary and tertiary institutions to discover talents.

It is the likes of the athletes of the XXII CWG that can give us some hope, and I’m sure the sports minister, Sunday Dare, will be basking in this success during his tenure, though he might have contributed very little to the success.