For Nigeria, the year 2022 should be dedicated to Nigerian athletes, men, and women alike. Their feat, prowess and a bit of success in the World Athletics Champions held in Eugene, Oregon in the USA from July 15, 2022, to July 24, 2022, and then the spectacular successes at the XXII Commonwealth Games held in Birmingham, United Kingdom, from July 28 to August 8, 2022, held the attention of our suffering and desolate, hopeless, and despondent, harassed, and insecure Nigerians.

At least they lifted our spirits and once again, brought some forlorn hope that if we put our efforts, patriotism and internal prejudices and distrust aside, we could really swing it as a united and prosperous nation, people, and society.

At the end of the Commonwealth Games in Birmingham on Sunday, August 7, Team Nigeria amassed 12 gold, nine silver and 14 bronze medals, bringing the numbers to a total of 35 medals. Interestingly, at a time when Nigeria was most divided, nobody was asking where the athletes are from or what ethnic group or religion they belong to. None of that nonsense that has pervaded our lives for the past eight years.

According to The Cable Newspaper, it was a record-smashing outing for Team Nigeria at the 2022 Commonwealth Games (CWG) in Birmingham. Medals were raked in at an exceptional rush while Nigerian athletes broke several records in the competition. Team Nigeria won 12 gold medals in the competition — the country’s highest haul in the history of the CWG.

Amazingly, all the gold medals were won by female athletes who took the tracks and gymnasiums in Birmingham by storm and wrote their names in the annals of the competition. Tobi Amusan surged to the finish line in 12.30 seconds in the final of the women’s 100-meter hurdles to set a CWG record. Ese Brume registered a record-setting 7-metre leap in the long jump.

In the women’s 4×100 metres, the quartet of Amusan, Favour Ofili, Rosemary Chukwuma, and Grace Nwokocha cruised to gold while setting a new African record with a time of 42.10 seconds. Lifters like Adijat Olarinoye, Rafiatu Lawal, and Alice Oluwafemilayo also set new CWG records in their respective categories.

Nigeria finished the competition with 35 medals — 12 gold, 9 silver, and 14 bronze — to clinch a very creditable 7th on the medal table on the final day of the glorious competition. Athletics provided the most medals for Nigeria with 10 podium finishes, followed by wrestling with seven.

Below is the full list of all 35 medallists for Team Nigeria at the 2022 CWG (Courtesy The Cable ): 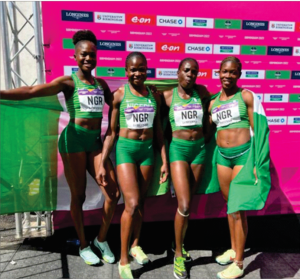 I  urge readers to refer to my article of August 22, 2009, for more history of Nigerian sports. It made me proud and cry at the same time. Nigerian athletes have been appearing at major athletics meeting since 1952. At the All-Africa Games at Brazzaville (former Congo), they piled up an enviable record where they won one event after the other and came back home with nine gold, five silver and four bronze medals. Jumoke Bodunrin was one of the stars of that game, and she won the title of “Africa’s fastest woman”.

Nigerian athletes first participated officially in the Commonwealth Games in 1954 and they won several medals. In the High Jump, Emmanuel Ifeajuna (yes, the same Major Ifeajuna, a hero of the 1966 coup d’etat) created a new British Empire and Commonwealth Games record by clearing the bar at 6 ft. 8 in.; Nafio Osagie took the bronze in the same event. The Nigerian team also set a new record in the 4×100 yards relay by recording the same time of 41.4 seconds as Canada very narrowly beat them into the silver medal position. Another narrow defeat which gave Nigeria a silver medal was on the Hop, Step and Jump (now called Triple Jump) in which Peter Esiri jumped 50 ft 0 ½ in., one inch less than the winner. Nigeria’s third silver medal was won in the Long Jump by Karim A B Olowu. That same team also won 3 bronze medals; one each in High Jump, Long Jump and Boxing and came fourth in the 100 yards.

On the whole, it was a successful debut for Nigeria, coming fourth overall behind England, Canada and Australia. In the 1958 Commonwealth games, Nigeria again took silver in the 4×100 m Relay, took bronze in 1974 but finally won this event at the 1982 games.

At the Commonwealth Games held in Kingston, Jamaica in August 1966, Nigeria carried away more than half of the gold medals for boxing, won the glamorous long-distance races, shone in the sprints and broke several records.

The highlight of Nigeria’s remarkable performance was, however, Violet Odogwu’s success in the women’s Long Jump. She won the bronze medal and had the distinction of being the only African woman to win a medal at the games and she also reached the finals of the 80 metres hurdles.

Overall, Nigeria won three gold; four silver and three bronze medals and came 7th out of the 36 countries which took part in the games.