Has anyone ever wondered why, despite all the harsh measures taken against thieves in some cities in Nigeria, like lynching and burning them alive, they have continued to steal? Indeed, often times, even where suspected thieves are being killed and burnt you realize that others are still stealing there. Why do they do that? Why the wanton disregard for their lives? Only one word captures the reason for that: desperation!

Things have gotten so bad and terrible in Nigeria today that many are living by the day. They don’t care a hoot about tomorrow. All they care about is now, this minute; not even the next hour. They have been driven by the harsh economic climate of the country to live on the wrong side of the law and thus, despite knowing the gruesome fate that awaits them if captured, they persist in their nefarious trade.

As this year’s elections draw ever so close, there are some people out there who are waiting to join the queue of thieves, while those already in the queue are waiting to go a notch higher. What is holding them is just the little hope that Nigeria could get better by the emergence of someone new; someone who will be like a breath of fresh air; someone who has the political will to save the country from the deadly jaws of the old, thieving order.

Without doubt, many impoverished Nigerians, including the well-to-do, see Peter Obi of the Labour Party as holding the hope for a New Nigeria; the hope for liberation from the manacles of those who have conspired to keep the country down. Many see the coming elections as Nigeria’s last chance. 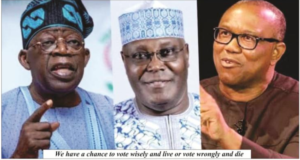 They see the elections as what will make or mar Nigeria, a country blessed richly by God with all the good things of life nature has bestowed on her, but which has been run aground by heartless, clueless and wicked people who call themselves leaders. People who keep recycling themselves and keeping others out. They see Nigeria as their property and believe it is their sole right to rule.

For those who are waiting to see if there will be light at the end of Nigeria’s dark tunnel after the elections, any attempt to thwart their mandate could trigger something terrible; something that will make a mockery of the EndSARS protest Denying them their mandate will be like denying them of their last chance of survival. It will unleash a new era everyone has been dreading; an era of brazen lawlessness and utter chaos.

Those already into criminality will degenerate further and those on the fringes will take a full plunge. Anarchy will take over in the streets, markets, communities and families. The prospect of another four years of excruciating hardship will unchain the wolves and we could have a Hobbesian State in our hands where only the fittest will exist. It will be utterly unsafe to walk the streets.

It will be extremely dangerous to expose one’s acquisitions. Even those who manage to buy rice from the market will be traced to their homes and robbed and that is if they manage to make it home. We could have a situation where robbers will break into homes just to carry food items.

Many will rob and dare you to kill them as they are better dead. It could become dangerous to look healthy, as one could be categorized as belonging to the oppressive class. The thieving political class will not enjoy their loot in peace as they will be traced home and dealt with. Many will throw caution to the winds in their bid to exist.

These are scary scenarios that could happen if the hopes of the vast majority of the long suffering Nigerian masses are truncated. Thus, for those who still see the coming presidential election as being about Peter Obi will be making the greatest mistake of their lives yet. In Obi, the hungry, angry and desperate masses see their only chance to survive and live again.

As I keep saying, it is not about Peter Obi. It is about what he represents and any other person who does not belong to the thieving political class and who has the capacity to go up against them would have been supported as Obi is being supported today. He is just a vehicle which came at the last minute to evacuate people from looming danger. This is why no governor, local government chairman, political appointee or even a traditional ruler can convince many not to vote for Obi.

It is no longer a party thing. It is about survival because parties will remain but the individuals will not if the envisaged catastrophe comes. The people of Benue State who voted for Buhari in the 2019 Presidential Election have realized their folly.

Many of them are not alive today to even regret their foolishness as they have been sent to the great beyond by killer herdsmen, without any of those herdsmen being prosecuted. Today, those who have survived don’t need to be preached to on why they should reject the old order that did nothing while their people were extinguished.

As I’m doing now, I warned in 2015 about what was to come if the wrong person or persons got our votes. Some people tried to pretend that it was much ado about nothing and voted in an incompetent person. But while they could be forgiven their foolishness at the time, what about those of them that went further to re-elect the same person in 2019?

While some of them have been sacked from their villages, others have been killed like chicken and to worsen matters, nothing happened. Both civilians and non-civilians were killed needlessly, with the government which ought to protect them allowing the killers to go scot free on many occasions. Today, the remnants have realized their folly but at great cost.

Today, I’m warning again about worse things to come if out of foolishness, greed, gluttony or stupid sentiments we make the mistake of allowing the old order to continue. Anyone who cries while buying a bag of rice or buying tubers of yam who decides to go ahead and vote because of religion, ethnicity or party deserves whatever gruesome fate comes to them. Anyone who cannot today travel around the country because of the insecurity ravaging the land and still sees the old order as the best for the country deserves to be sacrificed to the gods.

Because their foolishness can negatively affect me, I am shouting today from the rooftops for them to open their eyes and vote for a New Nigeria. Even if they are not sure of what the New Nigeria will look like, it is still going to be better than what we have experienced these past years.

We cannot and should not allow those who want us to die to continue to lead us because of momentary gain. The little money they give you today will mean nothing when death comes knocking on your door in the form of killer herdsmen, bandits or religious fundamentalists.

If you are a soldier or police officer and you allow yourself to be used in thwarting the people’s mandate, remember that your colleagues are now the target of all manner of hoodlums who relish in snuffing out your lives. Thus, you should not hesitate in discharging your duties professionally and allowing the people to freely choose their next set of leaders. Indeed, the system you abuse or disrupt today may be like signing your own death warrant. It is not a threat; it is the stark reality.

I never knew that there would come a time in Nigeria when security agents will be going to work in mufti to avoid being attacked; a time when security agents will be hiding their identities while using public transport and even hiding their identity cards. I never knew I would see a day when state governors would be going about in convoys that are heavily armed, with armoured vehicles in front and at the back as in wartime. But it is happening today and despite that, some governors’ convoys have been attacked.

So, if these people can be this afraid and unprotected, what happens to those they should be protecting? Yet, if these things are frightening enough now, what will come will reduce them to child’s play. Desperation is a dangerous thing. It is even more dangerous to fight a monster that is not afraid of death.

But we have one last chance to try to change things. That chance is for us to throw out the old, corrupt order and enthrone a new leader who will breathe new life into the dying system. We also owe it a duty to surround that leader with other good people that will see leadership as service; people who will respect the sanctity of human life; people who will feel our pains. But should we act as foolishly and as stupidly as we have been doing, I doubt if even God will pity us.

The last chance is here. Let’s grab it and live!