Nigeria’s Flamingos Crash out of Under -17 World Cup Final

The Flamingos came agonizingly close to landing the historical final berth, but they allowed it to slip to the delight of the South Americans.

Nigeria’s U17 girls, Flamingos narrowly missed out on qualifying for the final of the ongoing FIFA U17 Women’s World Cup in India on Wednesday after losing 5-4 to Colombia on penalties.

Wednesday’s tie was a historic moment for both Nigeria and Colombia as it was their first Semi-final game ever in the History of the competition.

The Flamingos came agonizingly close to landing the historical final berth, but they allowed it to slip to the delight of the South Americans.

After battling to a barren draw in 90 minutes, both sides proceeded to the penalty shootouts.

Nigeria were in an early lead after Goalkeeper Jikwuaku Chikamso saved Yessida Munoz’s spot kick. But the advantage went sour when Edafe Omamuzo, who could have decided Nigeria’s fate, hit the crossbar. 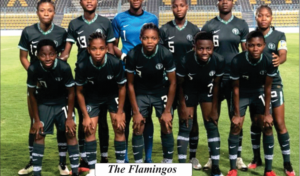 While the Colombians scored all their subsequent kicks, Folorunsho Comfort’s missed kick into the hands of Goalkeeper Luisa Agueldo saw Nigeria handing the final ticket to their opponents who celebrated widely over their historic feat.

Going into Nigeria’s first-ever female semifinal in the U-17 world cup, Coach Busayo Olowokere made a change to the squad that eliminated the USA in the Quarter-Final.

Opeyemi Ajakaye, who was Nigeria’s highest goalscorer during the World Cup qualifiers, was benched for the first time in the tournament for Etim Edidiong in a 4-4-2 formation against Colombia’s 4-2-3-1 game plan.

Nigeria got their first chance in the Colombian area after Taiwo Afolabi set up Captain Blessing Emmanuel who then fired off target in the fourth minute.

Despite the bright start, the Flamingos would have been punished for a sloppy defensive error from Tumininu Adesina in the 15th minute.

At the half-hour mark, Mary Espitaleta’s free-kick from an estimated 30-yard hit the crossbar and the rebound from a header was well saved by Omilana.

Six minutes later, another sloppy defensive gaffe from Folorunsho pressurised the Flamingos’ defence but was blocked by Omilana.

A minute later, Linda Caicedo’s counterattack was poorly utilised by Munoz who played into the hands of Omilana.

Towards the start of the second half, Olowokere substituted Adesina for Opeyemi Ajakaye for more offensive attempts.

Three minutes into the second half, Colombia got another chance to break the long silence after Folorunsho’s miscued pass was intercepted by Munoz but pacy Oyindamola Shakirat parried the ball to a corner.

Ajakaye made her presence known in the 52nd minute registering Nigeria’s second shot on target but her attempt was blocked by Colombian Goalkeeper, Luisa Aguinaldo.

Hard as both teams tried to get a win within the regulation period, it wasn’t to be as the game went into straight penalties after the five minutes stoppage time was exhausted.

In the ensuing penalty kicks, both Gabriella Rodriguez and Edet Offiong scored the first shootout

Stefania Perlaza and Edidiong Etim also scored the second set all in the same direction.

Munoz played into the hands of Jikwuaku while Miracle Usani sent Aruejo to the wrong side.

Both Mary Espiteleta and Taiwo Afolabi scored the fourth set

The fifth shootout from Caicedo was scored while Edidiong couldn’t decide Nigeria’s fate as her spot-kick hit the crossbar.

Both Oyinlola and Juana Ortegon scored their pieces.

However, Folorunsho’s penalty was saved by Agueldo as Natalia Hernandez scored her spot kick to give the Colombians a hard-earned victory and a place in the final where they will face either Germany or Spain.