Business mogul and immediate past gubernatorial candidate of the People’s Democratic Party, PDP, in Anambra Sate, Mr Valentine Ozigbo, believes that Peter Obi and his Labour Party (LP) have gained acceptance in all states in Nigeria.

Ozigbo made the comment in a statement last Sunday on the 31st anniversary of the creation of Anambra State.

He encouraged the people of the state to play their part in the new wave of political awakening sweeping through the country.

The former Transcorp boss expressed the hope that the 2023 election would spark a revolution in Anambra’s political landscape. 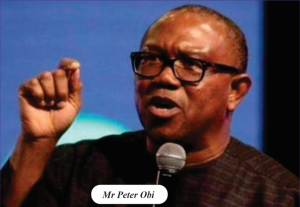 Noting that the state had made unsteady progress, Ozigbo urged citizens to prioritize the character and competence of leaders and the processes through which they emerged.

The PDP governorship candidate in the last Anambra guber election noted that the state was not suffering because of a shortage of qualified individuals in politics but because leading parties and the processes corrupted or discouraged those who could achieve positive change.

‘While we will always ask for better leadership, Ndi Anambra can beat their chests and say they have been dealt a better hand compared to other states. We have had several leaders who have left their marks and played their part in shaping the state.

‘Fortunately, one of the most impactful leaders in our history (Obi) is vying to become Nigeria’s president and replicate the unique leadership that has won him global acclaim,’ Ozigbo stated, adding that 2023 signified a point Nigerians must get it right at all levels.

Ozigbo and his Ka Anambra Chawapu political movement were formally received into the LP, August 23, by Obi and the party’s national leadership.