Football is a universal sport loved by all and when you play in a sport that brings thousands of spectators to the stadium and millions more to the screens, you’ll definitely be earning big bucks. With the high net worths these football stars have, one wouldn’t blame them for splashing the cash sometimes, and here we have the top ten richest football stars and the cars they deem worthy of their esteem.

John Obi Mikel is the richest footballer in Nigeria. The former Super Eagles captain earned around one billion Naira per year while playing at Chelsea in England.

He later moved to Tianjin Teda, a Chinese club that offered him over twice his Chelsea take-home pay. Currently, a free agent, Obi is worth $45 million. The 35-year-old drives a ₦45 million Mercedes Benz G-class, a ₦75 million Bentley Continental GT, and the latest Range Rover Sport.

Popularly known as Obagoal, Obafemi Martins was once Nigeria’s fastest player and a goal-scoring menace to opponents. He began his football career with Inter Milan where he scored countless goals and later moved to England where he played in premiership sides Newcastle and Birmingham. He now plies his trade in China.

The Leicester player is one of those footballers whose dreams of becoming a football player were met with resistance from their parents. Especially from his father who was a soldier at that time. Ndidi went against his father’s wish to see him educated and pursued football and that decision is now paying off.

Ndidi is not known to be extravagant or flashy when it comes to cars. The only car he has been associated with is a BMW X3 and a Mercedes G-wagon which he reportedly bought for his wife on her birthday in 2019. 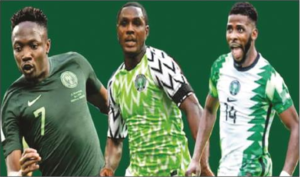 The Nigerian centre-forward is one of the hottest prospects in world football currently and two years ago signed for Italian Serie A side, Napoli, for a fee of 70 million euros (64.2 Million Pound), his market value is estimated to be €65m.

Coming 5th on our list of the top 10 richest footballers in Nigeria is another former Chelsea FC player, Victor Moses. The Nigerian attacking midfielder was a key player in Antonio Conte’s Team.

Moses drives some of the best cars you can ever imagine like a ₦22 million Audi A8, ₦15 million Range Rover Sport, a Maserati and Mercedes Benz G Wagon worth ₦42 million. You can view Victor Moses’ whole car collection here.

Playing in Saudi Arabia comes with a lot of perks and for Odion Ighalo who has just won his first career trophy last Monday with Al Hilal after a 17-year wait, luxury is definitely worth it.

With what his massive income has made him, he doesn’t hesitate to splash the money on luxury cars like the ₦15 million Range Rover Sport, and ₦32 million Mercedes Benz G Wagon while still having a fleet of other expensive cars in his garage.

With a net worth of $18 million, Ahmed Musa plays as a forward for Turkish Super Lig Club, Fatih Karagümrük.

Musa is one of the few athletes who do not only spend but also invest. He owns a filling station in Kano State and drives a BMW i8, a ₦15 million Range Rover Sport, and a Mercedes Benz G Wagon worth ₦42 million.

Everyone who watched the Super Eagles soar high in the 2013 African Nations Cup will never forget Emmanuel Emenike. The star striker was pivotal to the team’s victories. He has played for a number of clubs and garnered money along the way.

The footballer has some endorsements, a music record label, and a hotel in Nigeria. His mansion in Imo State was the talk of the town in 2018 with an overhead bridge on the premises. He drives a customised Mercedes Benz G Wagon worth ₦45 million, and a Range Rover Sport.

The Everton FC midfielder is also Jay-Jay Okocha’s cousin and lives in London with his sister and parents.

Alex Iwobi drives a Mercedes-Benz Convertible (~₦25 million), a BMW 7 series, and a Range Rover. He is rumored to have bought matching gold-colored Benz G Wagon and Lamborghini for himself and his ex at ₦71 million.

With a net worth of $5 million, Super Eagles striker, Kelechi Iheanacho, plies his trade in the English Premier League with Leicester City where he earns a stunning 4.8 million Naira a week.

The Imo State star drives a Rolls Royce, BMW i8 worth N12m, a Mercedes C300 worth N18m, and a Range Rover too.