Nigeria, Suffering from Too Much Borrowing – Obi

Too much borrowing for consumption rather than production is the bane of Nigeria’s development, Peter Obi, a presidential aspirant on the platform of the People’s Democratic Party, PDP, has said ahead of his primary elections next week.

Obi who made this assertion during while addressing the delegates of the party at Senator Uche Ekwunife Event Centre, Awka, Tuesday, said the trouble with Nigeria was that various tiers of government borrowed money on behalf of the citizens just to share instead of investing in productive ventures.

Obi promised to move the country’s economy from consumption to production if elected and described himself as the most qualified aspirant in the contest in terms of managerial and leadership skills.

‘We all know that our party has put the president’s primary open to all zones, but I am assuring you that I will win because I am strongly ready and well prepared for the electoral exercise. I will contest the primary with all I have. 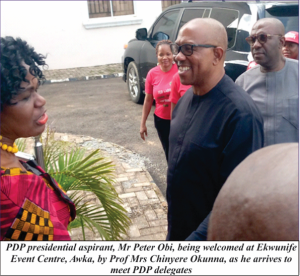 ‘If given the party ticket and elected eventually as the next president, I will turn the country from a sharing to a productive nation. If I were the president of Nigeria, I would remove sharing money and replace it with a producing formula.

He urged the delegates to make a good choice and vote for the right person that would rescue the country, adding that he was committed to the project of liberating Nigeria.

Speaking, Dr Doyin Okupe, the spokesperson for former President Olusegun Obasanjo, said he stepped down from the presidential race because he saw a better person in the race in Peter Obi.

Okupe who is also the Director-General of Peter Obi Campaign Organisation, said Obi was the most qualified person to be the president of the country, urging Anambra delegates to vote for him massively in the primary election.

According to him, ‘This is the time for the Igbo to produce a president and I will do everything to support them.

‘My concern is to witness the progress of this country and stop the evil and unjust denial of an Igbo man from becoming president of the country.

‘God Almighty will blind those working against the Igbo nation. Peter is the best among those who are coming from the east and he is better than all others that are aspiring to lead this country. This man has gone around the world, seeking knowledge and he is the most eminently qualified to lead this country.

‘I urge the Anambra delegates to vote for Obi. The power to make a president is in the hands of you, the delegates,’ Obi told the delegates.